As explained on their YouTube posting, Aerovel’s autonomous flight of their Flexrotor aircraft shows a remarkable level of adaptability and control.  “In what are believed to be the first-ever flight cycles of an unmanned aircraft based on an unmanned boat, Flexrotor launches from a remotely-controlled skiff while underway, climbs out as a helicopter, transitions to wing-borne flight, images the skiff while flying at low and high speeds, transitions back to thrust-borne flight, and retrieves autonomously onboard. The aircraft then shuts down, is automatically refueled and restarted, and repeats the first flight, finally being secured onboard in a docking station.”

Aerovel notes that the boat was radio controlled, but the Flexrotor Pandora flew the mission on its own and without human intervention during the October 16 flight over the Columbia River in eastern Oregon.

This repeated maneuver is as thrilling as it looks.   Tad McGeer, the founder and president of Aerovel, wrote of an earlier flight, ““transition requires a climb, pitch-over, dive, and zoom, so we entered the new regime with a roller-coaster thrill. But after a few seconds the ride turns sedate, with the engine ticking over for long-endurance cruise at 50-60 [knots], and the big rotor hardly making a sound.” 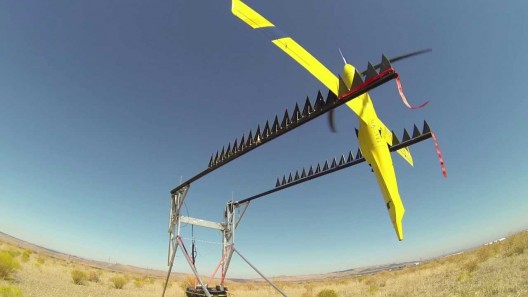 Aerovelo retrieval rack allows for some flexibility in aircraft positioning, but adding wind and wave action adds to the level of difficulty involved

Dr. McGeer is no stranger to autonomous flight, having been part of startups Aurora Flight Sciences, Insitu (since bought by Boeing), and making the first unmanned Atlantic crossing with a large model powered by a small four-stroke engine.  This ability to get long-range flight from small vehicles helps explain the current design’s ability to stay aloft for 40 hours and cover 3,000 kilometers (2,000 nautical miles, 2,300 statute miles) on only 8 kilograms (17.6 pounds) of fuel, all finding room in the 180-millimeter (7-inch) diameter fuselage.

The two-stroke engine on Pandora is fueled by “heavy” JP-5, JP-8, or A-1 leavened with a two-percent addition of lubricating oil.  The two-kilogram, 4.4-pound engine, acting through a gear-reduction system, swings a 1.9 meter (6.23 feet) rotor for near silent cruising, crucial in possible surveillance roles.

The streamlined fixed nose ahead of the big propeller can hold a one-kilogram (2.2-pound) payload.

Tiny electric motors on the wing tips power stabilizing thrusters which assist stability when the aerodynamic V-tail surfaces are folded for lift-offs and landings.

Asked about whether the 28cc 3W28 engine could be supplanted by an electric motor, Dr. McGeer noted that range would suffer, since current batteries would have to be proved in automotive use first, and even if brought to expected levels, would need to exceed those expectations by a factor of two to be practical in aircraft.

Despite demonstrating precise levels of on-board self-control for his Flexrotors, he is skeptical over whether economical levels of autonomy could be brought to bear on the CAFE Foundation’s concept of small commuter aircraft reducing freeway clutter.

For all that, Tad McGeer’s demonstrated accomplishments may well be preparing the path toward just such new and hoped-for technologies.