This was not their first rodeo.  Core members of the AeroVelo human-powered helicopter team, “Have been working together since 2006 on the world record setting Snowbird Human-Powered Ornithopter as well as the series of high-speed streamlined bicycles. Over the course of the various projects we have built a wealth of experience in human performance, lightweight composite construction, and advanced aerodynamic design.”

Their Snowbird maintained altitude for 19.3 seconds on only human power.  Even though towed into the air, it flew on its own after the pilot released the towrope.  The beauty of this flight is so compelling the footage has been used in Honda commercials.

Aerovelo’s Vortex streamlined bicycle, one of a series of high-speed human-powered racers

This level of dedication and an obvious high level of physical fitness paid off today with AeroVelo capturing the AHS (American Helicopter Society) Sikorsky Prize – $250,000 for the first person or group to hover at an altitude of three meters for one minute.

“The team undertook initial feasibility and design studies for the “Atlas” in January 2012. With intermediate development through the spring, in April Todd Reichert and Cameron Robertson began work full-time on the design of the helicopter with special attention to programming a full aero-structural optimizer for the helicopter rotors (a revolutionary development in the field).”

The AHS describes the aircraft.  “The Atlas is larger than any operational helicopter ever constructed, based on its overall width of 58 meters (190 feet), though it weighs only 52 kilograms (115 pounds). It has four 20.4 meter (67 foot) diameter rotors that are powered by the pilot pedaling a Cervelo carbon-fiber bicycle. The Atlas project was begun in January 2012 and made its first flight in August 2012.”

More challenges are on the horizon.  Since AeroVelo was only one of three teams recently flying as part of the AHS competition. The others are the University of Maryland in College Park, Maryland with its Gamera II helicopter and California Polytechnic State University in San Luis Obispo, California with its Upturn II aircraft.  They will be taking part in future AHS competitions which are not yet made public.

AHS’s International Human Powered Helicopter Competition Committee reviewed the design and flight testing of the Atlas human powered helicopter, as well as data from its June 13, 2013 flight. They verified that the Atlas flight met all of the requirements to win the competition and its US$250,000 prize. AeroVelo’s Dr. Todd Reichert piloted and pedaled the Atlas on that flight inside The Soccer Centre in Vaughan, Ontario. 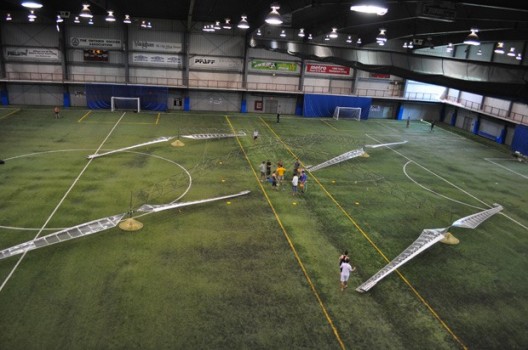 Atlas nearly fills soccer field. Keeping it within bounds may have been as challenging as keeping it hovering

AHS defined the requirements to win the AHS Sikorsky prize, “for an aircraft using only human power to fly for at least 60 seconds, reach an altitude of at least 3 meters (9.8 feet) and remain hovering over a 10 by 10 meter (32.8 by 32.8 foot) area. The full competition regulations, as well as past news updates, videos and other information, are available on the AHS International website.”

AeroVelo’s mission includes an echo of Paul MacCready’s dictum, “To do far more with much less,” an admirable sentiment in today’s energy-hungry world.

A big thank you to Damon Seeley for alerting your editor to this exciting achievement.