Rice University, supported by the Air Force Office of Scientific Research (AFOSR), has demonstrated “a way to boost the efficiency of the ubiquitous lithium ion (LI) battery by employing ribbons of graphene that start as carbon nanotubes.” 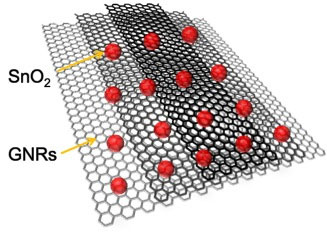 Unzipped carbon nanotubes form a gray matrix on which dots of tin oxide (red) rest. Even distribution of SnO2 helps with stability of battery energy storage and output

The AFOSR explains, “Four years ago, [Rice chemist James] Tour’s research team demonstrated that they could chemically unzip cylindrical shaped carbon nanotubes into soluble graphene nanoribbons (GNR) without compromising the electronic properties of the graphitic structure. A recent paper by the Tour team, published in IEEE Spectrum and partially funded by AFOSR, showed that GNR can significantly increase the storage capacity of lithium ion (Li-ion) by combining graphene nanoribbons with tin oxide.

“By producing GNR in bulk, a necessary requirement for making this a viable process, the Tour team mixes GNR and 10 nanometer wide particles of tin oxide to create a slurry.

GNRs, a single atom thick and thousands of times longer than they are wide, not only separate and support the tin oxide but also help deliver lithium ions to the nanoparticles.  Researchers added a cellulose gum binding agent and water, then applied the mixture to a capacitor; then encased all in a button-style battery.

This hybrid capacitor battery shows promising characteristics, its proof-of-concept anodes retaining a capacity more than double that of the graphite currently used in lithium battery anodes after 50 charge-discharge cycles.

Testing showed initial charge capacities of more than 1,520 milliamp hours per gram (mAh/g). Over repeated charge-discharge cycles, the material settled into a solid 825 mAh/g (a considerable boost over conventional Li batteries).  “It took about two months to go through 50 cycles,” said lead author Jian Lin, a postdoctoral researcher at Rice, who believes it could handle many more without losing significant capacity.

Tour sees the flexibility of the tin oxide GNR combination creating a structural and electrical framework for future development.  “Graphene nanoribbons make a terrific framework that keeps the tin oxide nanoparticles dispersed and keeps them from fragmenting during cycling,” he said. “Since the tin oxide particles are only a few nanometers in size and permitted to remain that way by being dispersed on GNR surfaces, the volume changes in the nanoparticles are not dramatic. GNRs also provide a lightweight, conductive framework, with their high aspect ratios and extreme thinness.”

Other teams at Rice have broken silicon down into a powder that solves some of the problems associated with expansion and contraction in batteries.  Tour’s research teams are working with other metals to explore possible further increases in energy storage.

The team published the results of their most recent research in the American Chemical Society’s journal, ACS Nano.  Co-authors of the paper are Rice graduate students Zhiwei Peng, Changsheng Xiang, Gedeng Ruan and Zheng Yan and Douglas Natelson, a Rice professor of physics and astronomy and of electrical and computer engineering.  Tour is the T.T. and W.F. Chao Chair in Chemistry as well as a professor of mechanical engineering and materials science and of computer science at Rice.

Boeing, the Air Force Office of Scientific Research, Sandia National Laboratory and the Office of Naval Research supported the research.

The blog has reported on other efforts to unzip nanotubes for increased energy in batteries.  We’ll await further results from Rice and other researchers with great interest.