Airliners beat cars in fuel economy, especially on longer trips.  That would not be news to attendees at recent Electric Aircraft Symposia, where speakers like Ilan Kroo, Stanford University professor and aircraft designer, have brought that message home.

One of Kroo’s slides, shown below in a 2009 lecture (It’s nearly an hour, but worth a look and listen), lists a “narrow-body” airliner (in this case a Boeing 737-800) as able to fly one passenger coast-to-coast on 29 gallons of fuel, at about 81 passenger miles per gallon.  A person carpooling his or her four-passenger Prius and driving responsibly could beat that (although not in the five hours required for the jet to make the total flight), but most trips are solo affairs, especially during commutes.

Not anywhere near Green Flight Challenge efficiencies (403.5 ppmg for the winning Pipistrel G-4), such economies are improving with more modern versions of fuel efficient airliners.  Cars are also gaining in fuel economy, prompted by government mandates for 54 mpg goals in the next decade.

Sivak, of the University’s Transportation Research Institute, looked at “the amount of energy needed to transport a person a given distance in a light-duty vehicle (cars, SUVs, pickups and vans) or on a scheduled airline flight.”  Results were charted in British Thermal Units (BTUs) per person mile for different modes of transport between 1970 and 2010.

With 14.5 million light vehicles sold in 2012, even that number makes up only six percent of the total light vehicles on the road – the rest being older, probably less fuel efficient, and being older, less likely to achieve their once advertised mileage.   A 57-percent uptick in mpg in a decade will be “a daunting task,” in Sivak’s words.  It took the three decades from 1970 to 2010 to achieve a 65-percent gain in mileage – and that’s not counting the increased loads required to equal airliner performance. 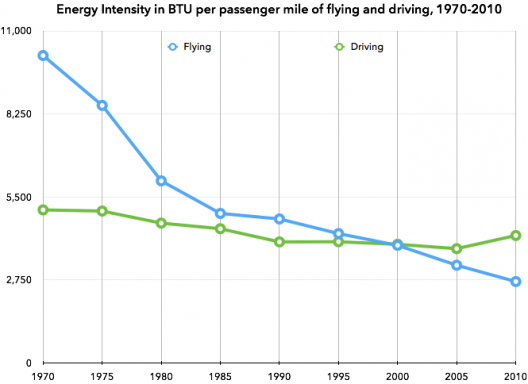 Cars would have to carry a 67 percent greater load – that 1.3 extra passenger to compete, and vehicles loads have been dropping since 1970.  Flying has improved 74 percent in loads carried with less fuel in the last 40 years, compared to a 17-percent improvement for cars.

Surprisingly, trains and motorcycles are more efficient per person mile than cars or airplanes.  In 2010, drivers used a blazing 4,218 BTU per person mile while airliners used only 2,691.  Amtrak trains ran tepid at a mere 1,668, motorcycles slightly warmer at 2,675 and transit buses nearing hotness at 3,347.

Lighter, stronger materials, improved internal combustion, and moves toward hybrid and electric power will see these numbers falling over time, with benefits to users and the planet.