OriginOil and Algasol are two algae–to-oil producers who’ve joined forces to cultivate and harvest micro algae that can perhaps “reach a tipping point and compete with petroleum.”

Algasol’s process perhaps most closely resembles that shown by NASA scientist Dr. Johnathan Trent, which he presented at the fourth annual Electric Aircraft Symposium.  His OMEGA, “Offshore Membrane Enclosure for Growing Algae” relies on water motion and sunlight to churn treated wastewater that otherwise would be literally dumped into the ocean into a refineable algae.  Waste CO2 can also be used to generate algae, another “two-fer” that would clean up the environment while providing a literally green fuel source. 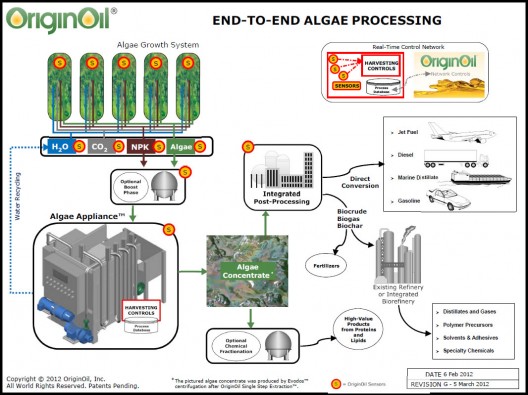 Algae from source to refined fuel

In their joint press release, the two firms explain, “Algasol’s floating bags or photobioreactors (PBRs) can operate in the ocean or in salt water ponds on land. Because they float, Algasol believes their PBRs achieve optimal light exposure with outstanding productivity results and avoid the high temperature and excess salinity often encountered in solar growth systems. Algasol has received a patent in 70 countries for its unique method of floating bags using relative water density.

“’Algasol’s patented system focuses on how to grow algae in floating bags, and their testing has indicated this can be much more efficient than other cultivation methods,’ said Riggs Eckelberry, OriginOil’s CEO. ‘Now with NASA and Lawrence Berkley working with Algasol, we are excited and eager to contribute our own breakthrough harvesting system to help us collectively achieve a cost breakthrough in the race to compete with petroleum.’”

Once Algasol’s processes generate the algae, they need to “harvest” the crop.  According to Miguel Verhein, executive director of Algasol Renewables, “We plan to recommend OriginOil’s field-proven, chemical-free, high flow and low-energy harvesting system, and once available, the integrated biocrude system they are developing with the Department of Energy.”

A good many players are involved.  Algasol is in partnership with NASA and the Lawrence Berkley National Laboratory of the U.S. Department of Energy, and working with Arizona State University (ASU) and the Arizona Center for Algae Technology and Innovation (AzCATI).

OriginOil is working with the Department of Energy’s Idaho National Laboratory on its downstream fuel conversion process.

According to the firms, three primary challenges could impede cost-effective algae production.

1. Most algae growth requires suspension of the growth medium in large volumes of water.  The floating bags alleviate that concern.

2. Algae have a tough cell wall that must be cracked to release the oil within.  Doing this with the lowest energy use is crucial to making oil production economical.  That is part of what OriginOil hopes to accomplish.

3. Most algae production is energy intensive overall. Energy recovery from the process itself must, which releases gases such as hydrogen, might answer this requirement.