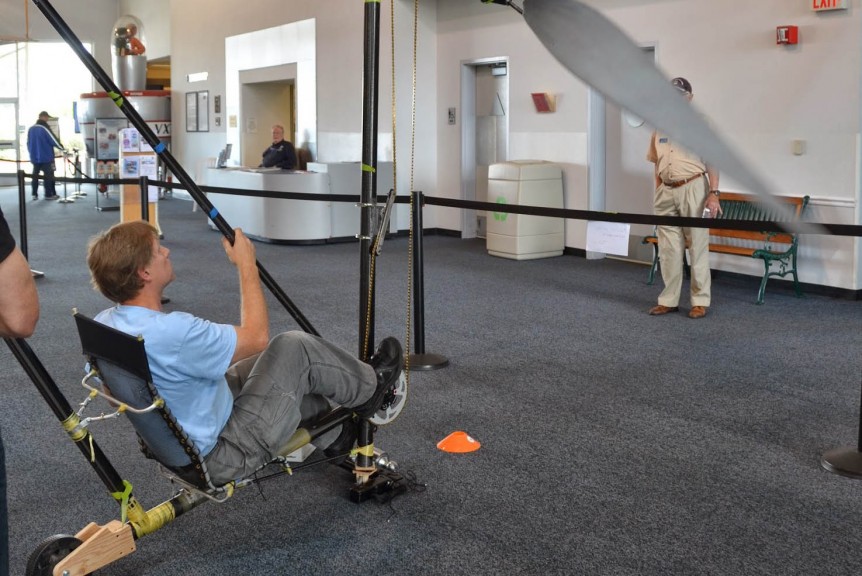 Alec Proudfoot made a 233-meter (764-feet), 37-second flight in his DaSH PA (Dead Simple Human-Powered Airplane) on December 4 at Half Moon Bay Airport west of San Francisco.  The 33.3 meter (108.27 feet) wingspan (it can be extended to 40 meters, or 131.23 feet) aircraft did well until a weak flange on the vertical tail mount failed.

Alec reported his personal state of readiness and some details of the flight in an email to the British Human Powered Flying Club.  “…pilot max weight at just above 90 kg (me, out of shape and about 15 lbs. heavier than optimal).

“It flew a lot easier than expected (meaning less power required than I thought it would) and handled great. A bit of PIO (pilot-induced oscillation) in the middle of the flight as I sorted out the handling (we slowed the servos way down to avoid moving our delicate control surfaces too fast — but we need to speed them back up a bit).  I felt I could have flown the length of the Half Moon Bay, CA runway (just under a mile, we started about 1,000 feet down the runway), but the flight was cut short when the vertical tail mount failed. The landing was uneventful.

He noted his maximum heart rate during the flight was 179 – “pretty high for me.  The effort felt low, but maybe it was the adrenaline.  Too bad we couldn’t get our power meter working…”

“The failure occurred because we cut a flange too close to the core material at the high stress part of the mount (the test articles had gone through extensive truck testing at higher than max speed with full control deflection, but they didn’t have the defect in the flange). We’ve repaired the mounts with more carbon and wider flanges and hope to be flying again tomorrow if weather cooperates.” 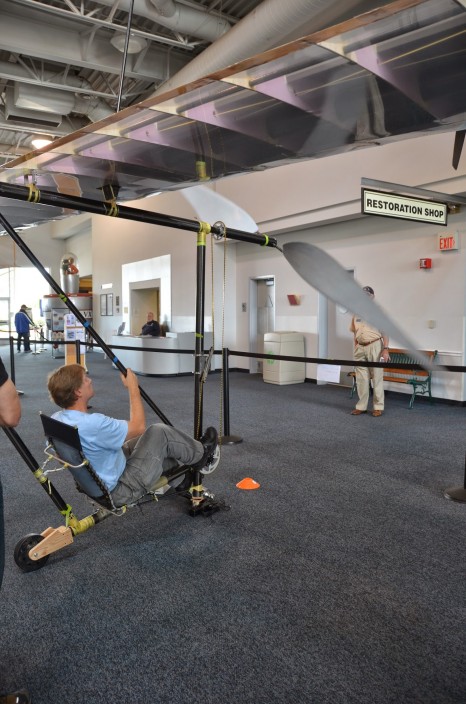 Unfortunately, the weather did not cooperate, and Alec won’t be flying again until the New Year.

Alec’s blog provides a large number of details of the machine’s construction. including the initial structural tests and aircraft assembly at the Hiller Aviation Museum in San Carlos, California.

In an email response to your editor’s questions, Alec responded, “The tail is already fixed.  We were ready to fly Sunday, but it started to rain as we were setting up. I am hoping for next flight attempts in January.

The propeller was designed by my friend, Steve Morris, PhD.  He is president (I think that is his title) of Martin UAV (formerly MLB Company), a drone manufacturer, and he has his own propeller design codes.

You can find additional photos and videos here and follow Alec’s blog on DaSH here.