Regular readers will remember Dr. Yi Cui’s name.  He’s a Stanford University scientist who has worked with paper batteries, much more powerful electrodes, and means of helping batteries stay together under the continuous strain of expanding and contracting during charging and discharging.  He explained that at the third annual Electric Aircraft Symposium at the Hiller Aviation Museum, and has since adopted several tactics to overcome that problem.  One commercial outgrowth of his work, Amprius, is working on commercial production that benefits from his insights. 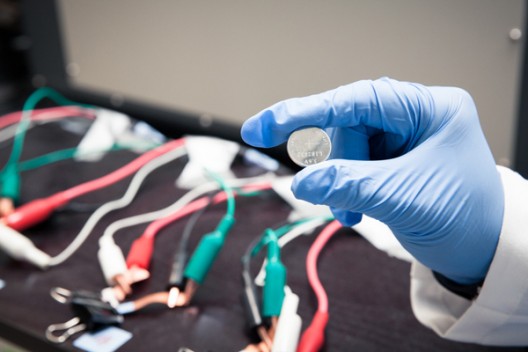 This prototype lithium ion battery contains a silicon electrode protected with a coating of self-healing polymer. The cables and clips in the background are part of an apparatus for testing the battery’s performance. Photo: Brad Plummer / SLAC

Since that internal flexing eventually leads to cracking of electrodes, Dr. Cui’s latest announcement brings some hope that such things can not only be overcome, but literally healed.  Just as our bodies have internal resources to fight diseases and repair muscle and bone, batteries can be made to be self-healing.

Dr. Cui has been a proponent of using silicon as a major component in electrodes, since its ability to soak up lithium during battery charging and release it readily on discharge is one of the best of any electrode materials.  This has issues, though, in that as it flexes, the silicon tends to pulverize, rendering the battery useless.

By coating electrodes with a stretchy polymer, Stanford University and the Department of Energy’s SLAC National Accelerator Laboratory  researchers have found a way to bind elements of the electrodes together and “spontaneously heal” tiny cracks that otherwise develop and spread during the battery’s operation.  The team’s report will appear in the November 19 issue of Nature Chemistry.

Chao Wang, one of the post-doctoral researchers and co-author of the paper, explains, “Self-healing is very important for the survival and long lifetimes of animals and plants. We want to incorporate this feature into lithium ion batteries so they will have a long lifetime as well.”  Wang developed the self-healing polymer alongside electronic skin created by Zhenan Bao, a professor of chemical engineering.  This skin can be used on robots, sensors, and prosthetic limbs, mimicking human skin.  Chao incorporated carbon nanoparticles to the polymer to make it electrically conductive.  We seem to end up with a chemical circulatory system and electronic nerve replicants in this brave new battery world.

The comparison seems more apt when one realizes the scientists “deliberately weakened some of the chemical bonds within polymers – long, chain-like molecules with many identical units. The resulting material breaks easily, but the broken ends are chemically drawn to each other and quickly link up again, mimicking the process that allows biological molecules such as DNA to assemble, rearrange and break down.”

This biomicry apparently paid off, with Bao reporting, “We found that silicon electrodes lasted 10 times longer when coated with the self-healing polymer, which repaired any cracks within just a few hours.”

Dr. Cui and Bao reported that the coated electrodes worked for “about 100 charge-discharge cycles without significantly losing their energy storage capacity.”  Their goal for practical applications would be 500 cycles for cell phones and 3,000 cycles for an electric vehicle.

Stanford’s report concludes, “The researchers said they think this approach could work for other electrode materials as well, and they will continue to refine the technique to improve the silicon electrode’s performance and longevity.”

The research team also included Zheng Chen and Matthew T. McDowell of Stanford. Cui and Bao are members of the Stanford Institute for Materials and Energy Sciences, a joint SLAC/Stanford institute. Hui Wu, a former Stanford postdoc who is now a faculty member at Tsinghua University in Beijing, is the other principal author of the paper.

The research was funded by the Department of Energy through SLAC’s Laboratory Directed Research and Development program and by the Precourt Institute for Energy at Stanford.