Ben Berry’s father, Ben Berry, Sr., was a Tuskegee Airman, part of the second wave of African-American recruits who fought their way into the Army Air Corps in 1943.  Instead of fighters, this group learned to fly the B-25 Mitchell bomber and was to launch from aircraft carriers for tactical attacks on Japan.

Following the war, Ben’s father earned an aeronautical engineering degree, and applied his skills to solving a worrisome pitch stability problem on the XB-70.  He designed the control systems for the X-15 project – which required a mix of aerodynamic controls and thrusters.

Perhaps this proud background helped his son recently become Chief Technology Officer for the City of Portland, following a career as Chief Information Officer for the Oregon Department of Transportation, Regional Chief Technology Officer (CTO) for a major hospital chain, and in senior leadership positions with the Royal Saudi Air Force, the Kingdom of Saudi Arabian International Airports, and Hughes Aircraft Company. 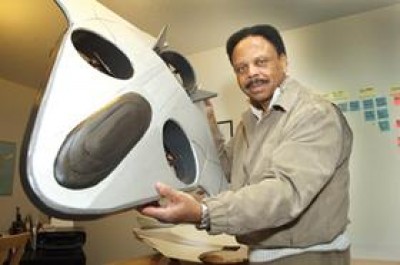 In his spare time, Berry, Jr. heads AirShip Technology Group, a startup developing a unique series of unmanned aerial vehicles (UAVs) slated for a wide range of military and civilian missions.  Loaded with cutting-edge technology, they’ve attracted attention, with Berry winning the Linus Pauling Award for Innovative Product of the Year – 2011, and being named a winner of the Sustainability Summit Innovation Challenge by the New York & New Jersey Minority Supplier Development Council and InnoCentive Inc.

Berry’s AirShips come in four sizes, V2, V5, V9 and V17.  Their full name is AirShip Endurance VTOL (vertical takeoff and landing) UAV Transformer V2/V5/V9/V17, with the first two truly unmanned, smaller versions and the latter two able to carry people who will not necessarily be pilots. Missions for the latter two might include inserting personnel into dangerous or hostile areas, or flying in supplies and retrieving wounded (while performing the reconnaissance/surveillance missions of their smaller brethren).

The V2 is a mere 4.4 pounds, but theoretically could stay up for up to two months with its “breakthrough nanotechnology patented solar film array” (which Berry claims to have26-percent efficiency in first generation form – with 50-percent to follow) on its broad area supplying energy to its supercapacitors.

Berry noted a sales order of 100 of these maneuverable and versatile machines this month.  Military uses pop to mind, but Berry sees a huge market in civilian applications, including first-responder reconnaissance for firemen, policemen and ambulance crews.  All this can be accommodated visually by AirScape and aromatically by AirSniff sensor packages.

The Transformer family can carry “sniffers” which allow sensing of contraband, dangerous chemicals and even improvised explosive devices (IEDs) from a safe altitude.  This technology alone could be used to upgrade reconnaissance at border crossings, shipping terminals, and other ports of entry.