Asphalt, Graphene, and a Lithium Coating

Mike Williams, reporting for Rice University in Houston, Texas, writes, “A touch of asphalt may be the secret to high-capacity lithium metal batteries that charge 10 to 20 times faster than commercial lithium-ion batteries, according to Rice University scientists.”

We’ve written about James Tour and his laboratory before.  He and his students come up with a plethora of new energy ideas and are able to demonstrate some exciting outcomes.  His latest effort mixes asphalt with conductive graphene nanoribbons, and then electrochemically coats the composite with lithium metal to form a battery anode.

Scanning electron microscope images show an anode of asphalt, graphene nanoribbons and lithium at left and the same material without lithium at right. The material was developed at Rice University and shows promise for high-capacity lithium batteries that charge 20 times faster than commercial lithium-ion batteries. Courtesy of the Tour Group

The anode, when combined with a sulfurized-carbon cathode, was used in full batteries for testing.  The results seem a bit incredible, with the ability to charge 20 times faster than commercial lithium-ion batteries.  Being able to “refill” your electric car or airplane in five minutes rather than two hours or more would make electric vehicles practical alternatives to their fossil-fuel-powered cousins.

Coulombic efficiency is relatively stable over a range of high discharge rates, but appears to develop fluctuations after the 60th cycle.  Courtesy of the Tour Group

To sweeten this already candied deal, the carbon-lithium combination prevents the formation of dendrites, those tooth-like growths that puncture separators in more conventional lithium cells and cause shorts and even fires.

Icing on an already well-frosted sweet, the new composite is simpler than other approaches, according to Tour.  “While the capacity between the former and this new battery is similar, approaching the theoretical limit of lithium metal, the new asphalt-derived carbon can take up more lithium metal per unit area, and it is much simpler and cheaper to make.  There is no chemical vapor deposition step, no e-beam deposition step and no need to grow nanotubes from graphene, so manufacturing is greatly simplified.”

Simplification of manufacturing, combined with extremely high performance, improved safety, and quick charges, makes this new battery something to watch.

The abstract sums it all up.  “Li metal has been considered an outstanding candidate for anode materials in Li-ion batteries (LIBs) due to its exceedingly high specific capacity and extremely low electrochemical potential, but addressing the problem of Li dendrite formation has remained a challenge for its practical rechargeable applications. In this work, we used a porous carbon material made from asphalt (Asp), specifically untreated gilsonite, as an inexpensive host material for Li plating. The ultrahigh surface area of >3000 m2/g (by BET, N2) of the porous carbon ensures that Li was deposited on the surface of the Asp particles, as determined by scanning electron microscopy, to form Asp–Li. Graphene nanoribbons (GNRs) were added to enhance the conductivity of the host material at high current densities, to produce Asp–GNR–Li. Asp–GNR–Li has demonstrated remarkable rate performance from 5 A/gLi (1.3C) to 40 A/gLi (10.4C) with Coulombic efficiencies >96%. Stable cycling was achieved for more than 500 cycles at 5 A/gLi, and the areal capacity reached up to 9.4 mAh/cm2 at a highest discharging/charging rate of 20 mA/cm2 that was 10× faster than that of typical LIBs, suggesting use in ultrafast charging systems. Full batteries were also built combining the Asp–GNR–Li anodes with a sulfurized carbon cathode that possessed both high power density (1322 W/kg) and high energy density (943 Wh/kg).”

Tour’s Astounding Repertoire – Science You Can Dance To

James M. Tour has a wide-ranging set of accomplishments, including over 630 research publications and over 120 patents.   According to Rice University, he “was inducted into the National Academy of Inventors in 2015. Tour was named among “The 50 Most Influential Scientists in the World Today” by TheBestSchools.org in 2014; listed in “The World’s Most Influential Scientific Minds” by Thomson Reuters ScienceWatch.com in 2014; and recipient of the Trotter Prize in “Information, Complexity and Inference” in 2014; and was the Lady Davis Visiting Professor, Hebrew University, June, 2014. Tour was named “Scientist of the Year” by R&D Magazine, 2013. He was awarded the George R. Brown Award for Superior Teaching, 2012, Rice University; won the ACS Nano Lectureship Award from the American Chemical Society, 2012; was the Lady Davis Visiting Professor, Hebrew University, June, 2011 and was elected Fellow of the American Association for the Advancement of Science (AAAS), 2009. Tour was ranked one of the Top 10 chemists in the world over the past decade….”  The list of accomplishments and awards goes on at length. 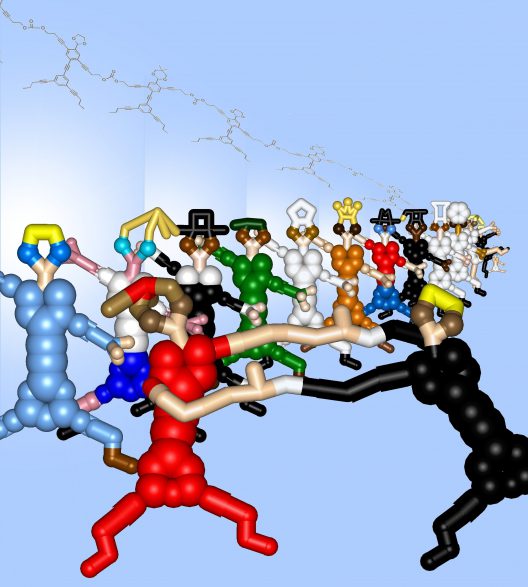 Not content to guide few lucky graduate students through the intricacies of exploration, he’s expanded his teachings into new areas.  “For pre-college education, Tour developed the NanoKids concept for K-12 education in nanoscale science, and also Dance Dance Revolution and Guitar Hero science packages for elementary and middle school education: SciRave(www.scirave.org) which later expanded to a Stemscopes-based SciRave. The SciRave program has risen to be the #1 most widely adopted program in Texas to complement science instruction, and it is currently used by over 450 school districts and 40,000 teachers with over 1 million student downloads.”