While the world waits for the 10X battery, a safe, long-range source of flight for our post-Green Flight Challenge fliers, we will probably have to go aloft powered by some bio-fuel derivative or combination of  “traditional” fossil fuels and biofuel.

Major players in the airline industry are responding to the probability that things will get a bit thin in finding ready, cheap sources of sweet crude, and are taking on not only the issue of using green energy, but of flying more efficiently – ala Green Flight Challenge practices and Voyager-type voyages.  This interest by the big players in the industry will probably be good for continuing fuel sources for general aviation, too.

With more activity than can be imagined in this arena, your editor turns to two excellent sources for background: Flightglobal.com and Greenair Online.com.  Recent reports from both show several major  successes, but also much political discord between national interest groups that slow progress.

We’ll look at a recent demonstration of low-emissions fuel use and a promising candidate for fossil-fuel replacement in this entry, then discuss the possibilities inherent in changing the conventional methods of routing and controlling aircraft in a second entry to follow soon, and end with a discussion of the international political infighting that threatens the success of these endeavors. 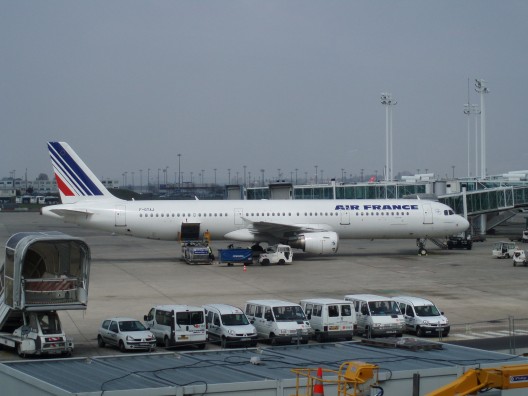 Reporting for Flight Global, Alex Thomas says that Air France, as of October 18, claims the “world’s lowest CO2 emissions commercial flight” from Toulouse-Blagnac to Paris-Orly.  The flight combined use of a50-percent mix of conventional kerosene and “bio-kerosene made from hydrogenated used vegetable oils, and “new air traffic management technologies.”

Light on details otherwise, the report notes Airbus’ claim that the “A321 was able to demonstrate how CO2 emissions could be halved in comparison to a regular flight,” and used “optimized flight procedures and a reduced on-board mass.”

Perhaps the half emissions claim is based on the fuel only, as the use of a higher cruising altitude and continuous descent gave 10-percent lower emissions than a more “traditional” flight.

There is no explanation of the “lower mass,” or discussion of the actual passenger miles per gallon compared to a “normal” flight, but most airplanes perform better carrying less weight.

With 10 percent of London cabbies now fueling their iconic mounts with veggie oil drained from the Wimpies and MacDonalds of the area, airlines might have a hard time finding enough sources for biofuel alternatives.  David Kaminski-Morrow reports that Virgin Atlantic hopes to use synthetic fuels from vented gases captured from heavy industrial plants.   Teaming with LanzaTech, a Chicago-based energy company (although its web site is New Zealand based), Virgin hopes to obtain fuel-grade ethanol through a gas-to-liquid process “compressing vented by-product gases from steel, cement and chemical factories and fermenting it.”

“’We take the waste gas normally flared as carbon dioxide and put it in the wing of an aircraft,’ said LanzaTech chief executive Jennifer Holmgren. ‘It sounds like science-fiction. I assure you, it’s not.’”

LanzaTech supplies its ethanol to Stockholm’s Swedish Biofuels, which converts it to synthetic jet fuel.  Starting with a 50-50 blend, the company hopes to achieve 100-percent biofuel for use in aircraft, which will begin test flights as the “next stage… possibly out of Shanghai where a demonstration plant is located.”

With an initial run of  100,000 gallons of ethanol a year slated for late 2011, a commercial operation to be commissioned in the early 2013 could produce up to 50 million gallons of  jet fuel annually.

International cooperation abounds in this case, with Boeing assisting in certification of the jet fuel, with flights from Delhi and Shanghai to London possible within three  years.

According to Flight Global, “LanzaTech said the gas-capture process could be applied to two-thirds of the world’s steel mills and could extend to other heavy plants, even potentially to coal-fired power stations.

“New Zealand already hosts a pilot scheme which produces 15,000 gallons of ethanol a year from the BlueScope Steel plant at Glenbrook.

“’In a nutshell, what we’re going into is the recycling business,’ said Virgin Atlantic president Richard Branson.  “’With the steel industry alone able to deliver over 15 billion gallons of jet fuel annually, the potential is very exciting.’”

“Swedish Biofuels has been carrying out a four-year project with the US Defense Advanced Research Projects Agency (DARPA), during which it demonstrated the capability of its technology to produce 100-percent biological aviation fuel – known as SB-JP-8 – from biomass, at pilot plant scale.”

With the promise that such fuels could replace their fossil equivalents, “’It’s the first time jet fuel has had a competitor,” said Branson, adding that Virgin Atlantic wanted “as many of its aircraft using this fuel as possible.’”

Since Flight Global lists over 4,000 news items found under the “Environment” search term, the level of activity is profound.  As with all such enterprises, many attempts will fall by the wayside, but the overall direction and impetus are clear and strong at this time.