Battery companies and academic researchers keep finding ways to make ions flow quickly and efficiently within batteries. One way is to reduce the size of a cell so that the ions don’t have to travel far.  University of Maryland researchers may have achieved a miniaturization that boggles the mind.

Their claim, that they’ve created a “single tiny structure that includes all the components of a battery that they say could bring about the ultimate miniaturization of energy storage components, comes from a story by Martha Heil in UMD Right Now.

The structure is based on a nanopore, an incredibly tiny hole in a ceramic sheet 80,000 times thinner than a human hair.  The holes can hold electrolyte that carries a charge between the top and bottom surfaces of the ceramic sheet.  Millions of these holes poked through a postage stamp-sized sheet comprise a battery.  Researchers think the uniformity of the holes allows them to be packed tightly and efficiently together.  Even more astonishing, the space inside the millions of holes, according to UMD, “is so small that the space they take up, all added together, would be no more than a grain of sand.” 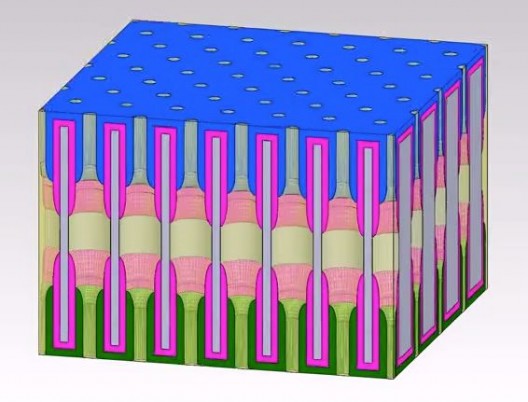 Coauthor Eleanor Gillette’s modeling shows that the unique design of the nanopore battery is responsible for its success.

According to the report, the postage stamp performs well.  Chanyuan Liu, a Ph.D. student in materials science & engineering, reports it can be fully charged in 12 minutes and recharged thousands of times.

Having demonstrated the concept, researchers are now working on improvements that will make the next version 10 times more powerful.  At that point, the batteries may be able to be manufactured in large batches, making commercialization a possibility.

Now that the scientists have the battery working and have demonstrated the concept, they have also identified improvements that could make the next version 10 times more powerful. The next step to commercialization: the inventors have conceived strategies for manufacturing the battery in large batches.

The research was funded by the Department of Energy.

The abstract for the paper gives more detail on what they managed to cram into those holes. 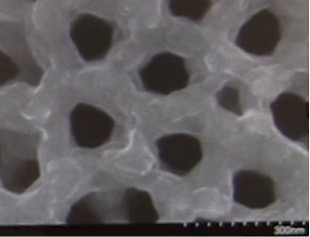 Nanopores show remarkable similarity in size, considering nanoscale in which they exist

A single nanopore structure that embeds all components of an electrochemical storage device could bring about the ultimate miniaturization in energy storage. Self-alignment of electrodes within each nanopore may enable closer and more controlled spacing between electrodes than in state-of-art batteries. Such an ‘all-in-one’ nanopore battery array would also present an alternative to interdigitated electrode structures that employ complex three-dimensional geometries with greater spatial heterogeneity. Here, we report a battery composed of an array of nanobatteries connected in parallel, each composed of an anode, a cathode and a liquid electrolyte confined within the nanopores of anodic aluminium oxide, as an all-in-one nanosize device. Each nanoelectrode includes an outer Ru nanotube current collector and an inner nanotube of V2O5 storage material, forming a symmetric full nanopore storage cell with anode and cathode separated by an electrolyte region. The V2O5 is prelithiated at one end to serve as the anode, with pristine V2O5 at the other end serving as the cathode, forming a battery that is asymmetrically cycled between 0.2 V and 1.8 V. The capacity retention of this full cell (relative to 1 C values) is 95% at 5 C and 46% at 150 C, with a 1,000-cycle life. From a fundamental point of view, our all-in-one nanopore battery array unveils an electrochemical regime in which ion insertion and surface charge mechanisms for energy storage become indistinguishable, and offers a testbed for studying ion transport limits in dense nanostructured electrode arrays.

Editor’s Note: The use of Ru (Ruthenium) nanotubes might make the battery somewhat pricey (Ru hovers around $60 per troy ounce), but then again, the extremely small size of each component in the battery would keep such costs low.