A research team at Australia’s Queensland University of Technology combined talents with scientists at Rice University in Houston, Texas to produce all-carbon structural panels that rival the best lithium-ion batteries for energy density, but can also be charged as quickly as supercapacitors.  In fact, the panels are supercapacitors, “a ‘sandwich’ of electrolyte between two all-carbon electrodes,” made into “a thin and extremely strong film with a high power density,” according to researchers.

These lightweight supercapacitor panels can be combined with “regular” batteries to “dramatically boost the power of an electric car.”  This application would not be unlike Dr. Emile Greenhalgh and Volvo’s structural/electrical body panels. 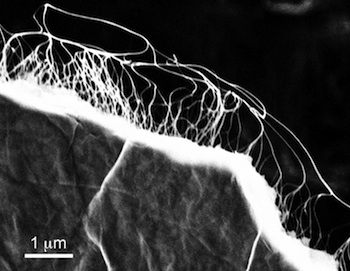 Postdoctoral Research Fellow Dr Jinzhang Liu, Professor Nunzio Motta and PhD researcher Marco Notarianni, from QUT’s Science and Engineering Faculty – Institute for Future Environments, and PhD researcher Francesca Mirri and Professor Matteo Pasquali, from Rice University in Houston, in the United States, created this breakthrough.  They think the film could be embedded in a car’s body panels roof, doors, bonnet (hood to you Yanks) and floor.  Their ability to charge like a supercapacitor could “turbocharge” an electric car’s battery in just a few minutes, according to the researchers.

Mr. Notarianni explained the advantages of combining batteries and supercapacitors: “Vehicles need an extra energy spurt for acceleration, and this is where supercapacitors come in. They hold a limited amount of charge, but they are able to deliver it very quickly, making them the perfect complement to mass-storage batteries.  Supercapacitors offer a high power output in a short time, meaning a faster acceleration rate of the car and a charging time of just a few minutes, compared to several hours for a standard electric car battery.” 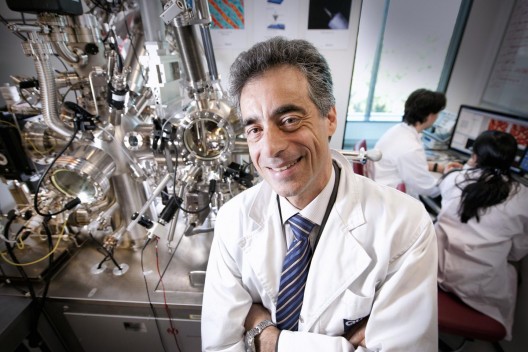 Queensland University’s Nanotechnology Laboratory and Dr.Nunzio Motta with one of its powerful microscopes.  Photo courtesty QUT

Dr. Liu noted that supercapacitors combined with batteries offer a “substantial weight reduction and increase in performance.  “In the future, it is hoped the supercapacitor will be developed to store more energy than a Li-Ion battery while retaining the ability to release its energy up to 10 times faster – meaning the car could be entirely powered by the supercapacitors in its body panels. After one full charge this car should be able to run up to 500 kilometers (310 miles) – similar to a petrol-powered car and more than double the current limit of an electric car.”

He sees the potential for rapid charging of other devices; “For example, by putting the film on the back of a smart phone to charge it extremely quickly,”

The low costs of an all-carbon-based supercapacitor body panel could change future auto markets, researchers hope.  “We are using cheap carbon materials to make supercapacitors and the price of industry scale production will be low,” Professor Motta predicts.  “The price of Li-Ion batteries cannot decrease a lot because the price of Lithium remains high. This technique does not rely on metals and other toxic materials either, so it is environmentally friendly if it needs to be disposed of.”

While the costs of carbon products decrease in the future, the prices of lithium remains high, another benefit of having an all-carbon structure.  “This technique does not rely on metals and other toxic materials either, so it is environmentally friendly if it needs to be disposed of.”

The researchers are part of QUT’s Battery Interest Group, a cross-faculty group that aims to engage industry with battery-related research.  Their findings are published in the Journal of Power Sources and the Nanotechnology journal.

The abstracts for the two papers show differing perspectives:

We fabricated high performance supercapacitors by using all carbon electrodes, with volume energy in the order of 10−3 Whcm−3, comparable to Li-ion batteries, and power densities in the range of 10 Wcm−3, better than laser-scribed-graphene supercapacitors. All-carbon supercapacitor electrodes are made by solution processing and filtering electrochemically-exfoliated graphene sheets mixed with clusters of spontaneously entangled multiwall carbon nanotubes. We maximize the capacitance by using a 1:1 weight ratio of graphene to multi-wall carbon nanotubes and by controlling their packing in the electrode film so as to maximize accessible surface and further enhance the charge collection. This electrode is transferred onto a plastic-paper-supported double-wall carbon nanotube film used as current collector. These all-carbon thin films are combined with plastic paper and gelled electrolyte to produce solid-state bendable thin film supercapacitors. We assembled supercapacitor cells in series in a planar configuration to increase the operating voltage and find that the shape of our supercapacitor film strongly affects its capacitance. An in-line superposition of rectangular sheets is superior to a cross superposition in maintaining high capacitance when subject to fast charge/discharge cycles. The effect is explained by addressing the mechanism of ion diffusion into stacked graphene sheets.

Flexible graphene-based thin film supercapacitors were made using carbon nanotube (CNT) films as current collectors and graphene films as electrodes. The graphene sheets were produced by simple electrochemical exfoliation, while the graphene films with controlled thickness were prepared by vacuum filtration. The solid-state supercapacitor was made by using two graphene/CNT films on plastic substrates to sandwich a thin layer of gelled electrolyte. We found that the thin graphene film with thickness <1 μm can greatly increase the capacitance. Using only CNT films as electrodes, the device exhibited a capacitance as low as ~0.4 mF cm−2, whereas by adding a 360 nm thick graphene film to the CNT electrodes led to a ~4.3 mF cm−2 capacitance. We experimentally demonstrated that the conductive CNT film is equivalent to gold as a current collector while it provides a stronger binding force to the graphene film. Combining the high capacitance of the thin graphene film and the high conductivity of the CNT film, our devices exhibited high energy density (8–14 Wh kg−1) and power density (250–450 kW kg−1).

Of course, here we would like to see the technology refined to the point of becoming the shells of our future flyers.  Where there is progress, there is hope.