Engineering and design students with Ohio State University’s Center for Automotive Research heated the Bonneville Salt Flats August 23, 2010 with a speed record for electric vehicles on the famed white wasteland – 307.66 miles per hour for the average of two one-mile runs.  The Buckeye Bullet BBV2.5 flew through the flying mile at 320 mph under the experienced hand of Roger Schroer, a professional race driver who has worked with the University team for the last six years.

The Buckeyes await certification of their record by the Federation Internationale de l’Automobile, the worldwide motor sports governing body. 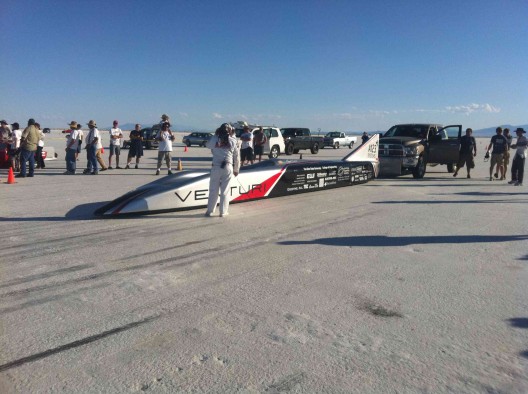 Graphic design major Kelly Hartnett keeps the world updated on team activities through her blog, explaining, “Our last attempt yesterday was all set to be the best run yet, everything was looking great, but midway through the first mile, we busted our clutch.  Too much torque from our motor ripped apart the half inch steel teeth that keep the motor connected to the gearbox.

“After a late night of trying to disassemble the motor and reinstall another type of clutch, we decided to call it: our last record will stay the best for the VBB2.5.”

Ohio State has an impressive resume, with last year’s achievement of highest speed achieved by a fuel cell-powered automobile, 302.877 mph, and a 2004 uncertified battery powered speed of 314.9 mph in Buckeye Bullet 1.

The Center for Automotive Research notes, “The Bullet 2.5 uses the same body and chassis of the hydrogen fuel cell powered Buckeye Bullet 2, and nearly the same electric traction system, but it is powered by a 600+ kW A123 Systems lithium-ion battery pack that was designed, tested and assembled by the Bullet team and A123 Systems. The team is supported by French electric vehicle manufacturer Venturi Automobiles, which lends its 10-year expertise in electric vehicles and significant sponsorship funding to the students.”

They are backed, too, by the Transportation Research Center, Inc., a design,  research and testing facility.

Eva Hakansson, speaker at the fourth annual Electric Aircraft Symposium, is planning an assault on this record with a two-wheeler capable of 400 mph.  Her discussion on building 500 hp battery packs for Killacycle, her husband Bill Dube’s record-holding drag bike, was educational and sobering for the extreme care that must be exercised in dealing with battery packs of this power.  We wish the Buckeyes and Eva ongoing good luck in their endeavors.