Cambridge University researchers claim to have successfully demonstrated how several of the problems impeding the practical development of the so-called “ultimate” battery, in this case a lithium-oxygen unit, could be overcome.  They make some pretty impressive claims, saying they’ve developed a working laboratory demonstrator with “very high” energy density – comparable to that of gasoline and with greater than 90-percent efficiency, and the ability to be recharged more than 2,000 times, or 5-1/2 years with a complete cycle and recharge every day.

A lithium-oxygen or lithium-air battery of this type would allow an uninterrupted drive between London and Edinburgh on a single charge, about 415 miles, over 100 miles greater than the top mileages promised by Tesla and GM at this point. 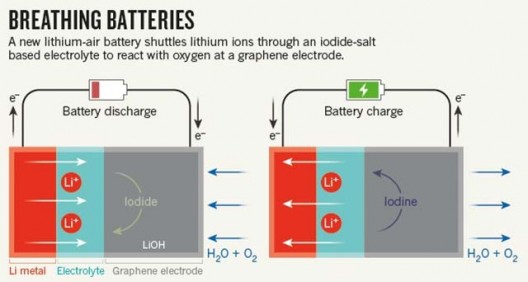 Researchers add the promise of one-fifth the cost and one-fifth the weight of currently available batteries – a touchstone for electric aircraft designers, and close to the goals U. S. Energy Secretary Steven Chu asked for three years ago.

Perhaps some of that weight difference comes from the “fluffy” nature of the electrodes, a frothy combination of graphene and “additives that alter the chemical reactions at work in the battery, making it more stable and more efficient.”

At this stage, the good news – that the basic premise seems to work as promised – is countered by the bad news that commercial, “practical” lithium-air battery is still “at least” a decade away.  (Wait a minute, where is the traditional message that the new invention is five years away?)

Professor Clare Grey of Cambridge’s Department of Chemistry explains, “What we’ve achieved is a significant advance for this technology and suggests whole new areas for research – we haven’t solved all the problems inherent to this chemistry, but our results do show routes forward towards a practical device.”  Grey, a Fellow of the Royal Society, uses advanced techniques such as nuclear magnetic resonance imaging to better view and understand the inner workings of lithium batteries, hoping to find ways to make batteries as much a part of electronics progress as other components.  Her group notes, “Many of the technologies we use every day have been getting smaller, faster and cheaper each year – with the notable exception of batteries.”

Dr. Grey’s co-author on their Science paper, Dr. Tao Liu, explains, “In their simplest form, batteries are made of three components: a positive electrode, a negative electrode and an electrolyte.”

In many attempts at developing better batteries over the past decade, researchers have been developing various alternatives to Li-ion batteries, and lithium-air batteries are considered the ultimate in next-generation energy storage, because of their extremely high energy density. However, previous attempts at working demonstrators have had low efficiency, poor rate performance (the ability to charge and discharge quickly), unwanted chemical reactions, and the need to be cycled only in pure oxygen.

Grey and her team use a different chemistry that earlier attempts at a “dry” (non-aqueous) Li-air battery, using lithium hydroxide (LiOH) rather than lithium peroxide (Li2O2).    Using a highly porous form of graphene for one electrode, and adding water and lithium idodide as a “mediator” in the electrolyte, made their battery more stable after multiple charge/discharge cycles.  These approaches reduced the “voltage gap” between charge and discharge to 0.2 Volts, making for a more efficient battery.

That highly porous graphene electrode greatly increases the capacity of the demonstrator, although only at certain rates of charge and discharge.  Researchers need to find how to protect the metal electrode so it doesn’t form dendrites, which can cause batteries to explode if they grow too much and short-circuit the battery.

Maybe one of the biggest stumbling blocks is that so far, test batteries can only be cycled in pure oxygen, something hare to achieve in the polluted atmosphere we breathe daily.  The CO2, nitrogen and moisture we live in would harm the metal electrode.  Additionally, the demonstrator can only be cycled in pure oxygen, while the air around us also contains carbon dioxide, nitrogen and moisture, all of which corrode the metal electrode.

Even though Liu concedes, “There’s still a lot of work to do,” he thinks solutions are possible for all the problems, and “we’ve shown that there are solutions to some of the tough problems associated with this technology.”

The team acknowledges support from the US Department of Energy, the Engineering and Physical Sciences Research Council (EPSRC), Johnson Matthey and the European Union via Marie Curie Actions and the Graphene Flagship. The technology has been patented and is being commercialized through Cambridge Enterprise, the University’s commercialization arm.