Carbon and oxygen comprise a big part of the universe, and are essential to life on earth. They may also be the answer for long-term energy storage in a promising battery development from Noon Energy.  “100 hours of storage at one-tenth the cost of lithium-ion batteries for long-duration storage.”

It started on Mars

According to Electrek, “Chris Graves, Noon Energy’s founder and CEO launched the company in 2018 After helping to develop NASA’s Mars Perseverance rover MOXIE device, which produces oxygen from the Martian carbon dioxide atmosphere.”  According to TechCrunch, “The device sucks in carbon dioxide and strips off an oxygen atom, which it stores on board. The remaining carbon monoxide is exhausted into the thin Martian atmosphere.

MOXIE, by the way, is an acronym for “Mars Oxygen ISRU Experiment. ISRU is another acronym, In Situ Resource Utilization,” or on-site use of available resources.  MOXIE was also the name of an early carbonated soft drink or  energy beverage.

On Mars, MOXIE resided inside the rover, weighed 14.14 pounds (in Martian gravity – 17.1 kilograms or 37.7 pounds on earth) and could produce about 10 grams or 0.022 pounds of oxygen per hour.  MOXIE would run for an hour at a time on an intermittent basis.

NASA explains that on earth, oxygen is constantly being converted to carbon dioxide by animals, or fires, or other chemical reactions.  Plants and trees use sunlight and water to convert their stored CO2 back into oxygen and replenish the atmosphere.  These are small amounts for each plant, though.

Bringing the technology down to earth, Noon’s 10-person team has developed a battery that uses carbon and oxygen, with no lithium or cobalt, and only one percent of “critical elements” involved compared to lithium batteries.  Using a “modified version of the same chemical reaction as MOXIE,” the goal would be  to “store electricity rather than to store oxygen.”

Since oxygen makes up almost 21 percent of our atmosphere (nitrogen is 78 percent), it’s abundant in the very air we breath.  Carbon in our air comes (among other forms) as either carbon dioxide of carbon monoxide, one which is good for us – up to a point.  NOON Energy is reluctant to share details of how their earthbound machinery will use that carbon and the oxygen in our air to store electrical energy, but best guesses seem to count on a fuel-cell-like reaction.  It’s all based on common materials readily available.  The system will probably resemble MOXIE, and incorporate a flow battery configuration, harking back to the Tissandier Brothers’ battery on their pioneering  1883 electric balloon. 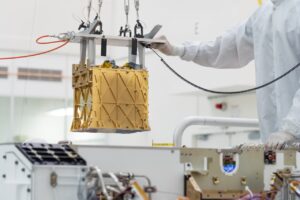 MOXIE being installed in Perseverance rover. Terrestrial energy storage units will doubtless be much larger

Hydrogen made from splitting water through electrolysis is one option. But Noon says its technology has double the round-trip energy efficiency of hydrogen, meaning less energy is lost as the energy is stored and retrieved. “That directly translates to lower cost,” Graves says. The chemicals used to store the energy are so cheap that the tank that holds them is more expensive.  Pulling the active ingredients from the ambient surroundings would assure a never-ending supply of active materials here on Earth. 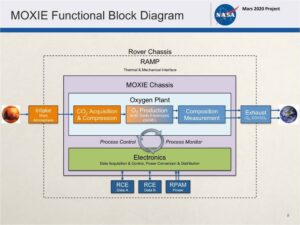 Noon Energy’s earthbound energy storage would probably function much like MOXIE, but store energy instead of producing oxygen

If Noon’s goals of ultra-low-cost energy storage are met, clean energy from wind and solar could replace most fossil fuel systems and produce a much cleaner planet.  The hope is that the technology can be scaled into vehicle-size systems.