Dr. Seeley provided this link to a story from China Daily this morning.  The blog reported on this airplane last year following its public debut, but this year, two examples showed up at the 10th China International Aviation and Aerospace Exhibition, also billed as Airshow China.  Held in Zhuhai, Guangdong Province, the show featured daily flight demonstrations by one of the two aircraft on display. 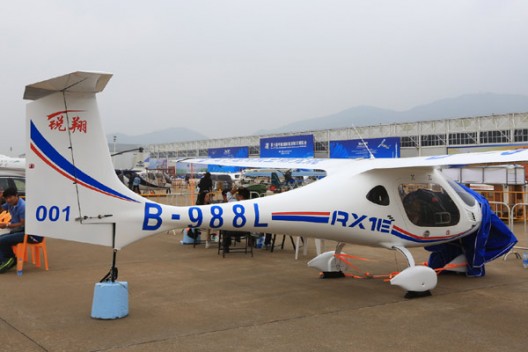 China Daily followed its headline with this optimistic kickline, “Huge markets are expected for the versatile, eco-friendly 2-seat RX1E, then reports, “China will soon put its first domestically developed electric aircraft into mass production, and designers expect a huge market at home and abroad.”

“First” may be a dubious claim, with Tian Yu’s Greenwing International (Yuneec in China) e430 having flown five years ago, and having resumed flight testing in the US last year.  It may be true in the sense that Yuneec International now only shows drones, action cameras and powered skateboards on its page, with all aviation activities apparently transferred to its operations in California. 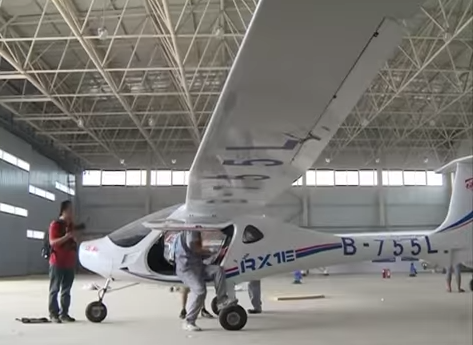 RX1E being assembled by students

Designed by members of Shenyang Aerospace University in Liaoning Province, the airplane is expected to receive its airworthiness certificate from the Civil Aviation Administration of China “before the end of this year,” and will enter production in 2015.  Yang Fengtian, “an academic” at the Chinese Academy of Engineering and President of the Aerospace University, is obviously proud of the accomplishment.  “This will be the first electric aircraft to be certified by our civil aviation authority.  The success of our plane means China has become a technology leader in this field.”

In Shenyang, construction has started on a plant that can produce 100 RX1Es each year within three years.   Whether that rate will be achieved remains a matter for conjecture, with a price of 1 million yuan, or $163,000.  This will require the 1,000 sales Yang predicts as a demand from Chinese general aviation, but he sees markets for police patrols, flight training, “entertainment,” and mapping surveys.  He also sees market possibilities overseas, even though America’s FAA has yet to approve two-seat electric flight.  Yang says “many foreign enterprises have contacted us to express an interest in it.”  We can hope that interest equates to action on the part of the different foreign regulatory agencies.

The RX1E has a maximum take-off weight of 480 kilograms (1,056 pounds) and a maximum cruising speed of 160 kilometers per hour (99.2 mph).  Able to fly 90 minutes or 230 kilometers (142.6 miles) on a full charge of its 10 kilowatt-hour battery packs, the airplane should provide low-cost flight, with a five yuan ($1.00) fee  for a 40-minute recharge, with total operational costs at 20 yuan per hour.  The video leaves some question as to how many battery packs the aircraft carries, and how long they would need to charge for longer flights, but based on Yuneec’s similar design, at least four packs would probably be needed for a 90-minute flight.

Roland Bosch, an aircraft exhibition organizer from Germany, attended the Zhuhai show to invite Yang and the RX1E to display at a general aviation show back home.  “The RX1E’s design and engine are very good.  I believe it will be a big success in the global market because it is one of the best electric aircraft to my knowledge,” he said.

During the show, Mr. He Jun, Deputy Director of Liaoning General Aviation Institute and Mr. Tong Jianhui, General Manager of AVICLUB, signed an order for the first of the aircraft, indicating that production will commence on demand from the market.

We hope to report more on this promising design as details become available.