Since Michael Faraday first split water into hydrogen and oxygen in 1820, scientists have puzzled over how to do this economically in large quantities.   The Blog continues to run stories about “artificial leaves,” low-energy approaches to dividing the hydrogen in water from the oxygen, and doing so economically.  The current most widely-used approach to capturing hydrogen is pulling it from natural gas via several processes.  The Office of Energy Efficiency and Renewable Energy explains the process on its web site.

In steam-methane reforming, “high-temperature steam (700°C–1,000°C) is used to produce hydrogen from a methane source, such as natural gas. In steam-methane reforming, methane reacts with steam under 3–25 bar pressure (1 bar = 14.5 psi) in the presence of a catalyst to produce hydrogen, carbon monoxide, and a relatively small amount of carbon dioxide. Steam reforming is endothermic—that is, heat must be supplied to the process for the reaction to proceed.” 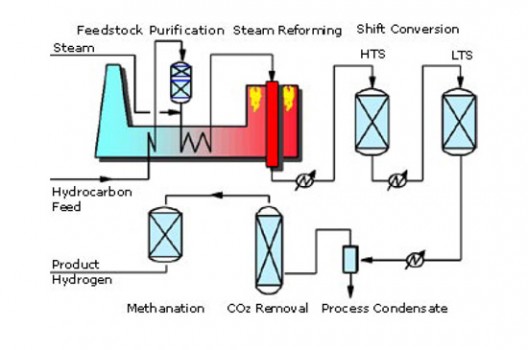 In a “’water-gas shift reaction,’ the carbon monoxide and steam are reacted using a catalyst to produce carbon dioxide and more hydrogen. In a final process step called ‘pressure-swing adsorption,’ carbon dioxide and other impurities are removed from the gas stream, leaving essentially pure hydrogen. Steam reforming can also be used to produce hydrogen from other fuels, such as ethanol, propane, or even gasoline.”

Environmentalists would decry this approach, pointing out that it relies on extracting natural gas, itself running into more opposition because of the hydraulic fracturing (fracking) of rock in which the gas is trapped.   Another objection might come from the heat and high pressure required to produce the gas, both energy-intense processes that reduce the overall benefits of the hydrogen produced.

Another process, partial oxidation, use a low-oxygen reaction in a vessel to pull out the hydrogen from natural gas, but quantities are lower than those produced in the more energy intense steam reforming.   All the objections involved with extracting natural gas in the first place remain.

Extraction of H2 from Coal

DOE includes extraction of H2 from coal, using a water-gas shift reaction, with CO2 removed and sequestered (another can of worms) and other impurities removed and stored.  The description is light on details as to what those impurities are or how they will be stored. 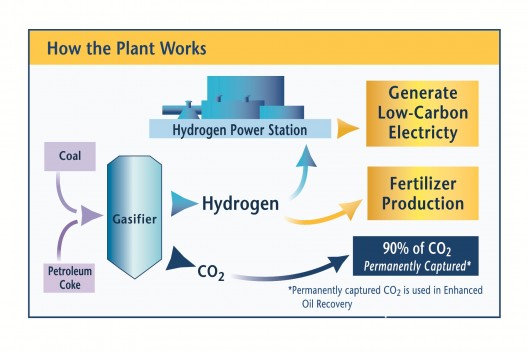 Biomass, including non-food plant material, animal and human waste, and other organic sources, can be “converted into a gaseous mixture of hydrogen, carbon monoxide, carbon dioxide, and other compounds by applying heat under pressure in the presence of steam and a controlled amount of oxygen (in a unit called a gasifier).”  This takes materials which would otherwise devolve into methane – said to be 20 times the greenhouse gas that CO2 is – into synthetic gas, or “syngas,” a mixture of hydrogen, carbon monoxide, and carbon dioxide.  The DOE explains that. “The carbon monoxide then reacts with water to form carbon dioxide and more hydrogen (water-gas shift reaction). Adsorbers or special membranes can separate the hydrogen from this gas stream.” 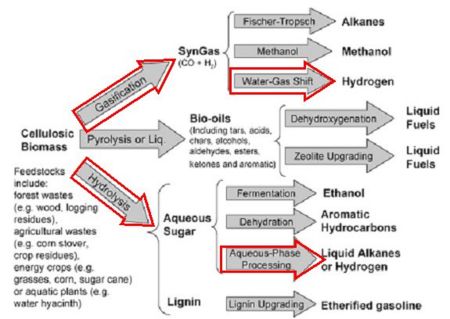 Biomass conversion leads to several possible products, one of which is hydrogen

In an alternative approach called pyrolysis, the biomass can be gasified in the absence of oxygen, but according to the DOE, biomass does not gasify as easily as coal, probably requiring more energy to create the desired hydrogen end product.   An additional step reforms the hydrocarbons produced to get the “clean” mix of hydrogen, carbon monoxide and carbon dioxide, which is then catalyzed and separated to extract the H2.

Unfortunately, the DOE says these processes are not practical at large scales, partly because of the need to handle and transport large quantities of biomass.  An alternative plan may be to use local biomass in small conversion facilities to produce local fuels and hydrogen.

That seems to cover the largest potential sources for producing hydrogen from fossil fuels or biomass (The Blog is always open to comments and reliable information).  All require at least some energy input, and the amount of H2 produced does not always seem to justify the energy required.

We’ll next look at the variety of “clean energy” sources, including solar power and more “artificial leaves” that could produce the hydrogen we will need if fuel-cell-powered cars are to become a reality on our roads – and thus provide the components we can use in our fuel cell-powered airplanes.  The allure of clean motoring and flying is inescapable – but will we confront the problems of supply, economics, and acceptance in ways that will allow the achievement of a greener future without using more energy than we obtain in the process?