A few years ago, Purdue University students Jim Danielson and Sean Kleinschmidt, helped launch the Purdue Electric Vehicles Club with physics major Tony “Danger” Coiro, who had created his own solar-powered motorcycle from a 1978 Suzuki he purchased for $50. Coiro drove around on his sun-mobile for less than one cent per mile. 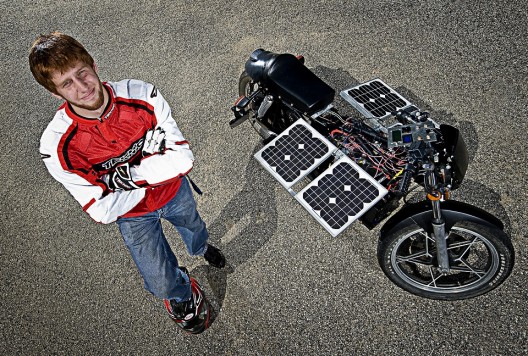 His middle name is "Danger." Tony Coiro and his solar Suzuki.

Just out of high school, Danielson and Kleinschmidt found another frugal ride, a 924 Porsche for a mere $500. The blown engine wasn’t a problem, since they replaced it with an electric forklift motor, controller and battery. The looks were great, although the poky top speed and lackadaisical acceleration strained against the image. 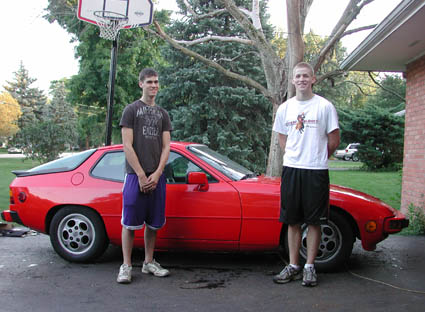 Their initial success sent Kleinschmidt to a summer internship at Tesla where he worked on battery development and Danielson to Electro-Motive Diesel, where he helped create motor control electronics.

besides founding the EV club, the trio oversaw construction of the 17 electric race karts that students built for the first-ever electric vehicle grand prix, held at Purdue in 2010.  This has grown to become a significant part of Speed Week at the Indianapolis Motor Speedway.

From a humble, low-budget club, the Purdue University EV club has fostered some major attractions. Two major evGrandPrix racing events to be held in the Spring of 2012. The first race will be held on Saturday, April 28th at the Grand Prix Race Track on Purdue Campus (West Lafayette).

Two weeks later, the 2nd International Collegiate evGrandPrix will take place at the Indianapolis Motor Speedway on Saturday, May 12th.  As the EV team notes, “Racing teams will compete on the IMS infield before the Indianapolis 500 race on a course near the IMS Hall of Fame Museum.”

Tony Coiro was right when he said, “Purdue Electric Vehicles will encourage enthusiasm for, and knowledge and development of, electric vehicles by students and the community.”

Aside from their Purdue ventures, Kleinschmidt and Danielson recently created a new and potent motorcycle that is fast and has great range, receiving cooperation and material support from AllCell Technologies, a Chicago-based battery and battery protection manufacturer.

In their press release, AllCell told their part of the story. “AllCell Technologies has teamed with two Purdue University engineering students to produce an electric motorcycle with cutting-edge performance and drive range. The 10.6 kilowatt-hour lithium-ion battery incorporates AllCell’s proprietary thermal management material, allowing the students to quickly and easily design the high energy density system capable of delivering up to 72 kilowatts of power. Initial testing indicates a maximum speed of over 120 miles per hour and a range of over 120 miles.”  Oh, yes, it also does 0-60 in 4.74 seconds.  This reflects the ambitions Coiro had when he told of his future plans to build a 100 mph bike that would travel at least 100 miles on a charge. 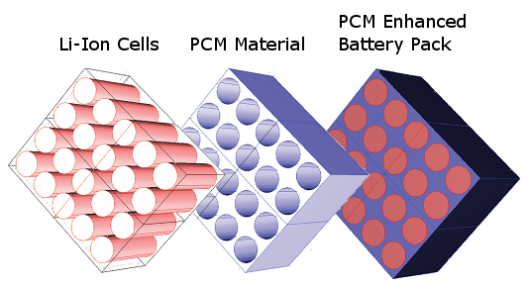 “In addition to providing manufacturing and design support and equipment, AllCell custom manufactured its phase change material-graphite composite (PCM-graphite) to provide thermal management for the battery cells. The PCM-graphite improves safety by preventing the propagation of thermal runaway if one cell has an internal short circuit. The material also absorbs and distributes heat during discharge and when the bike is exposed to elevated ambient temperatures, protecting the cells and prolonging battery life.

“Further support for the vehicle development was provided by Tesla Motors and Delphi Corporation.”

Allcell’s batteries promise energy density comparable to other lithium cells (107-190 watt-hours per kilogram vs. 130-200 w-hrs/kg for other lithium cells) and greater than 2,000 cycles at 75-percent depth of discharge. Their biggest advantage, at least for pilots, would be the reduction or elimination of battery fires (see our entry on a minivan meltdown – accomplished with only three model airplane packs).   Allcell offers batteries with two chemical compositions: lithium iron phosphate (LiFePO4, already noted for safety), and Lithium Nickel Manganese Cobalt (LiNIMnCo02) a tri-metal composition that offers moderately higher energy density.

AllCell is promoting their technology’s use in vehicles of all kinds, including electric automobiles.

According to Ecospeed, an electric bicycle manufacturer in Portland, Oregon, their switch to Allcell’s tri-metal batteries was brought about in part by their phase change material thermal management system. “The PCM surrounds each lithium-ion cell in the battery pack, where it absorbs and conducts heat away from the cells as they heat up. This simple and effective technology requires no energy to operate and can double the cycle life of the battery pack.”

Other thermal protection ideas require operational and mechanical complexities, so AllCell’s approach is a promising one. Its limits are certainly bound to be tested by some very promising young engineers from Purdue.