The Maeve 01 is the latest big dream from The Netherlands’ Delft Technical University – which  seems to be a resource-rich aeronautical community producing myriad flying machines.  The airplane comes with a novel recharging system, the Maeve ReCharge network – all to provide “Aviation for a generation that wants to travel, not pollute.”

The eight motors spanning its high-aspect ratio wings could be replaced by six, but that depends on replacing the eight 1.2 megawatt (1609 hp.) motors with 1.5 megawatt (2,012 hp.) units.  This seems plausible, since Jeff Engler’s Wright Electric has recently tested a 2 megawatt (2,682 hp.)  motor and ZeroAvia plans on delivering 2 MW units to retrofit DeHavilland Dash 8s within the next few years.  One possible downside would be having less of the 36-meter (118.1 foot) wing swept by the propellers.

Maeve founder Jan Willem Heinen explains the eight motors and their possible replacement by six more powerful units.  “The reason why we went for eight in the first place was that we could not find motor suppliers who were willing to go beyond 1.2MW.  Now going beyond 1.5MW is not a question, it is going to happen.” 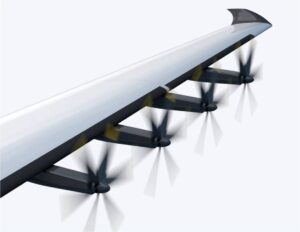 Debuting at the ILA Berlin air show, Maeve Aerospace was formerly known as Venturi Aviation.  Rebranding their craft as the Maeve 01, the 44-passenger airliner’s organization has received an initial 3.4 million euros ($3.56 million) in funding from several “undisclosed backers.”

Charging on a Regional Timeline

Maeve 01 claims a range of 550 nautical miles (1,000 kilometers or 621 statute miles), and a cruise of 246 knots (283 mph).  Counting a half-hour reserve of stored energy, the airplane makes 1.5 hour jaunts and sets down for what Maeve claims is a half-hour recharge.  If the 01 follows Maeve’s planned five flights per day, it would spend a busy 10 hours before being turned over to maintenance personnel.

Maeve’s recharging system is a neatly integrated package that can be contained in a thirty-foot shopping container. 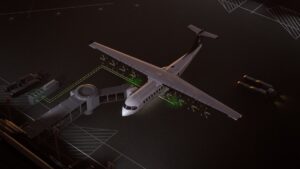 Simpleflying.com reports, “Maeve Aerospace co-founder and COO Joost Dieben, said, ‘The time of planning is behind us. We are now progressing in development of the core technology needed in any future electric aircraft – a portable, lightweight and safe battery pack. With this technology, we will be able to make an impact in aviation.’”

Using planned routes with Maeve ReCharge stations at each destination, operators can recharge within 35 minutes, an airline equivalent of five minutes at a gas pump for a driver.  The company claims that their ReCharge systems “runs on 100-percent sustainable energy at a low price per kilowatt-hour.”

Several major players are now in the race to electrify regional and even national air travel.  All seem reasonable bets to be successful, and the level of commitment and skills required seems to bode well future flying.