Diamond aircraft seem to have been the go-to choice for electrification, with Boeing and Airbus fielding different versions powered by an array of powerplants.    In 2008,Boeing’s fuel cell-powered craft, a DA-36 Dimona motorglider, “was modified by [Boeing Research and Technology Europe] (BR&TE) to include a Proton Exchange Membrane (PEM) fuel cell/lithium-ion battery hybrid system to power an electric motor coupled to a conventional propeller.”  Airbus’ 2011 DA-36 “E-Star’s” propeller was powered by a 70kW electric motor from Siemens, with electricity supplied by a small Wankel engine from Austro Engine with a generator functioning solely as a power source.  In 2014, Airbus showed an improved version of this craft at the Paris Air Show.  Erik Lindbergh chose the Diamond HK-36 for his Powering Imagination testbed, using a donated YASA 750 motor for power.

For all that electrifying experimentation, the airplane as normally configured with a Rotax engine has continued as a trainer and motorglider around the world.   Now, a larger member of the family will be used as a platform for a Diesel-hybrid power system. 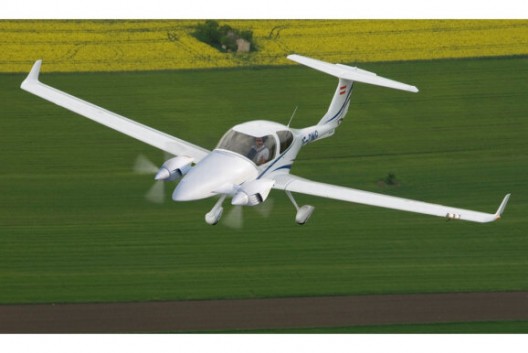 Conceptual drawing shows twin motors on stalks, much like a larger Cri-Cri

Diamond Aircraft and Siemens Motors are crafting a hybrid version of the four-seat DA-40.  The test vehicle will have an internal combustion engine which will power a 120 kW generator from Siemens.  The engine is an Austro Diesel which weighs 145 kilograms or 414 pounds.  Its 1,991 cc, 121.5 cubic inches displacement produces 123.5 kilowatt or 68 horsepower.  At best economy running speed, the engine uses 21 liters (a little over 5.5 gallons) of fuel per hour (assumed at full throttle), and charges the batteries, 200 kilograms (440 pounds) of which take up what was once the back seat, rendering the aircraft a two seater.

This is the same compromise reached by Pipistrel with its Panthera, moving down in payload and performance with each move toward greater electrication.  Diamond CEO Christian Dries told Aerokurier, “We have no intention to bring this aircraft in this form on the market, it is a pure Versuchtsräger.” Marshall Houston, a friend, helped explain that last word, untranslatable by Google or Bablefish.  It means “our own experiment,” with Dries explaining that this one probably won’t go to market in this form, the company waiting like the rest of us for better batteries.  “The batteries are now really the bottleneck,” Dries explains.

Diamond will try for test flights by the end of the year.   Motors might operate at a seemingly high voltage. “1,200 volts seem to me the best solution,” said Dries.

AvWeb reports the two Siemens motors weigh less than 30 pounds each and produce 85 kilowatts or 114 hp, essentially a pair of the same motor powering Pipistrel’s Alpha Electro Trainer.  The conceptual illustrations released so far show each motor on the end of a canard-like extension on the airplane’s nose, sprouting from where the Lycoming engine would normally fit.

The AvWeb report has Dries claiming that at normal cruise speeds of 110 to 120 knots (126.5 to 138 mph), the airplane could have an endurance of 10 hours, consuming 6 to 7 liters (1.8 gallons) per hour.  He explains, “Our first assumption, at the same speed, we have approximately 30 percent more efficiency; 30 percent less fuel at the same speed.”   That would indicate a fuel load of 70 liters or about 18 gallons, far below that of the full-tank 41.2 gallons in the standard tanks on a conventional DA-40.  Remember, too that Diesel fuel is heavier than gasoline, just under 7 pounds to 6.25 pounds.  The significant factor is the battery weight.

Dries said that battery management and power control was the most challenging part of the DA-40 hybrid-drive project, keeping all 200 cells in synch with one another and the power demands placed on them.

Regardless, the aircraft has safe operating possibilities because of a Diesel engine, which tends to be extremely reliable in itself.  But it is used to feed batteries which power the two motors.  The engine could fail and the batteries and motors would be able to continue flight – a true belt and suspenders approach.

Dries has hopes for the technology, telling AvWeb, which “will allow us to develop airplanes that are slightly different from everything we know now. For example, tilt rotor airplanes that will have the possibility of vertical takeoff, but can also fly at very high speed.”

The Diamond team awaits European Aviation Safety Agency (EASA) approval before starting test flights.  Whether the two to three years to achieve full tests will see a change in American certification possibilities for even two seat aircraft remains to be seen.