Dr. Krish Ahuja, Regents Professor at Georgia Institute of Technology (Georgia Tech) helped attendees at the eighth annual Electric Aircraft Symposium understand an unusual set of problems by starting off with an explanation of acoustics for non-acousticians.  His credentials, impressive as they are, are more than matched by his ability to help those outside his specialty understand his discipline.

He ran down a list of noise sources, explaining how we perceive noise and providing a basis for “killing” sound with other sounds.  Starting with simple sonic addition, he showed that 100 and 100 do not add up to 200, as long as we’re discussing sound.  100 dB (decibels – a measure of sound intensity) plus another 100 dB add up, in terms of sound intensity, to 103 dB.  Add two more pairings of 100 dB sound sources and we hear 106 dB; add two more such pairs for 109 dB.

This is fortunate, because otherwise the already raucous 120 dB takeoff by a Blue Angels FA-18 would be devastating to airshow spectators watching a six airplane formation takeoff.

On the dB a scale, the one used to measure how humans perceive sound levels, a reading of zero would equate to near total silence.  A whisper would reach 15 dB, and a normal conversation about 60 dB.  The lawn mower next door would overcome your backyard conversation with its 90 dB, and that car alarm on the street might hit 110 dB, not too far from levels reached by rock concerts or jet engines at 120 dB. 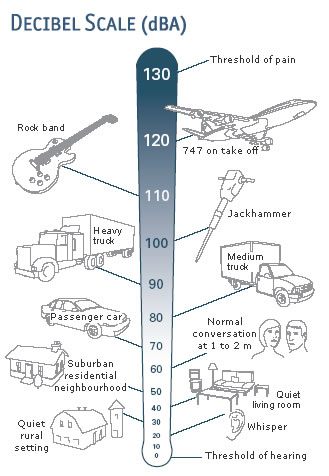 Despite the general racket from neighborhood activity, people seem to get upset by the noise passing overhead, even though it may be no worse than the noise next door.  Decibel Hell: The Effects of Living in a Noisy World, by Ron Chepesiuk, relates that it’s an international issue.  In September 2002, officials at Frankfurt am Main Airport in Germany received 56,330 noise-related complaints, for instance; and residents near a rural airport outside London, England submitted 100 anti-airplane noise petitions daily as part of their objections to proposals for three new runways to be built at the site.

Research in this area goes back to at least 1936, with a paper by L. Gutin, “Über das Schallfeld Einer Rotierenden Luftschraube,” (On the Sound Field of a Rotating Propeller), referenced by NACA researcher in a 1946 paper in the CAFE Foundation library.

According to Dr. Ahuja, even reducing aircraft propeller noise will have no effect on observers below sitting in 60 dBa background noise unless the prop noise is 12 dB lower.  He explained that anything that rotates produces “whistles” in proportion to rotational speed and, for propellers, the number of blades.  Having blades achieve ½ wavelength sound phasing helps kill noise, but both propellers have to be at the same frequency and amplitude. 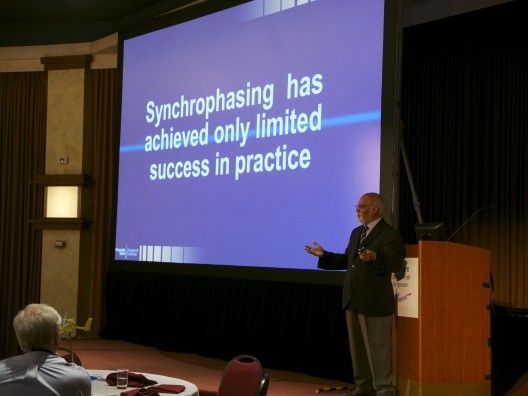 Dr. Ahuja provided this disclaimer showing that, as with many things in aviation, noise reduction is not as easy as it would seem

Pilots set propeller speeds to synchronize their propeller tip speeds, but it takes a fairly sophisticated system to synchrophase the propellers for the lowest vibration and least noise.  Noise caused by the propeller blade thickness is not as important, according to Dr. Ahuja as low tip noise, another reason to keep tip speeds low.  Loading noise, or the caused by the force imparted to the air by a propeller as it pulls a load, accounts for the increased noise of a propeller on an airplane beginning its takeoff roll.  Tip speed, blade count, blade chord and blade twist all play a part in the noise a propeller makes, and need to be studied and optimized for greatest sound reduction. 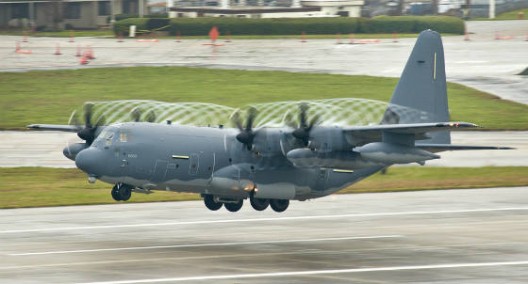 He discussed the example of the C-130J, a “Super” Hercules with four six-bladed propellers set to reduce noise.  Important as it is on such a large aircraft, such noise reduction will be extremely important for a Sky Taxi. Rapid acceleration and liftoff will cut down the time in which the loudest noises are present. Having a wheel motor or motors assist in the initial takeoff roll will reduce propeller loading, and therefore noise, and a rapid rate and angle of climb will increase the distance between the airplane and listening neighbors quickly.

Synchronizing and synchrophasing are highly important, though, because the “beats,” or differing harmonic signals caused by propellers running at even slightly different speeds are the deal killers in keeping neighbors happy with the sounds passing overhead.  Essentially, Dr. Ahuja reminded us, this type of concern can only be dealt with by an autonomous, computerized system that takes many cues from the engines, the airplane itself, and the environment to achieve lowest noise levels.

The CAFE Foundation Technology Library has 50 papers dealing with the issue of noise reduction.  Such concerns make for a better ride for passengers, with lower noise and vibration – and a more peaceful world for pocket airport neighbors.