Sebastian Thrun is best known for his leadership in the “Google Cars” program, fielding self-driving Priuses in the San Francisco Bay area and having the cars demonstrate a spotless accident record (except for those caused by other drivers running into them.)  He shared the current status of that project with attendees at the eighth annual CAFE Foundation Electric Aircraft Symposium in late April. 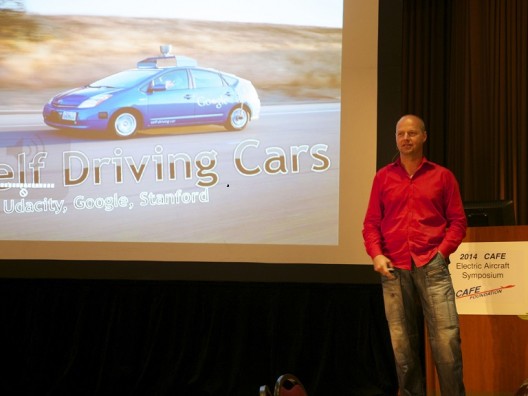 He’s also been responsible for Google Glass, those controversial mega-spectacles that have furnished stand-up comics with new realms of material, although the last laugh may be on scoffers as these ingenious devices point the way toward wearable computers.  Thrun’s also created a new type of open university – one that takes advantage of the online experience.

“Udacity was born out of a Stanford University experiment in which Sebastian Thrun and Peter Norvig offered their ‘Introduction to Artificial Intelligence’ course online to anyone, for free. Over 160,000 students in more than 190 countries enrolled and not much later, Udacity was born. Now we’re a growing team of educators and engineers on a mission to change the future of education by bridging the gap between real-world skills, relevant education, and employment.”

The Google Car project was derived from Thrun’s early dedication to finding a way to avoid the biggest cause of automobile accidents and deaths – drivers.  This followed the tragic loss of his best friend.  As the Computer History Museum web site explains, he has had an opportunity to show what he had learned in his quest ten years ago.  “In 2004, the U.S. Defense Advanced Research Projects Administration (DARPA) challenged dozens of teams then working on autonomous vehicles to compete for a $1 million prize. The hope was that a third of military vehicles would drive themselves by 2015.” 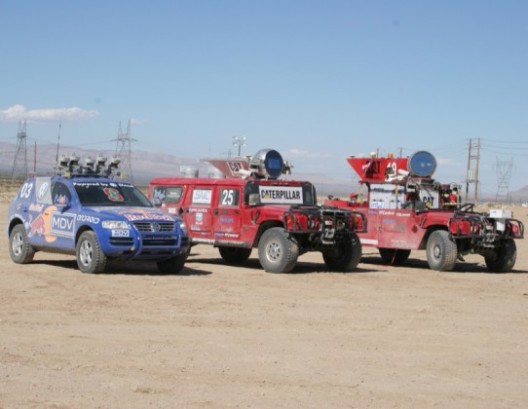 Nobody finished that first year’s event and several entrants didn’t make it out of the starting gate.  As the Museum site explains, things improved quickly. “But the next year an odd flotilla of driverless cars and trucks were crossing huge swathes of California’s Mojave Desert with nary a scratch. By 2007 the Urban Challenge had extended those successes to a mock city environment. While European researchers had laid the groundwork in self-driving, the U.S. was now a serious contender.”

Thrun has dedicated himself to lowering traffic fatalities to zero, and the desert duels in places where few humans could be harmed were good practice for other DARPA engagements that came with crowded urban environments.

Self-driving can’t just rely on GPS guidance (good to 10 meters on the Google Cars), which can only relate the big picture of a world that’s always changing. The car needs a capacity to interpret its surroundings, including stationary and moving objects, pedestrians, cyclists, and other motorists.  It needs to predict reasonable outcomes and must “focus its interpretive skills on variables that change.”

Things like rangefinders, laser lights scanning 10 times per second and a complex interpretive and feedback network help the car “sense” the need for lane changes before its human safety pilot can perceive it.  Video sensors help spot obstacles and read lane markings and traffic signs.  Somehow, the artificial intelligence component identifies cyclists and pedestrians, correlates speed and behaviors and “drives better than a human driver,” according to Thrun.

Three states, California, Nevada, and Florida now allow robotic cars on their roads, and as experience grows, and as a shared body of intelligence makes them even safer, other states will doubtless follow.

Sebastian Thrun left us with a bit of road-warrior wisdom.  Driving a little above the speed limit is safer, since fewer drivers cut in.  Google Cars figured that out on their own.  Such skills transferred to a three-dimensional medium will enable future flight to include pilot-less aircraft – a potential cost-saving component of safer flight.