The Culmination of Eight Years’ Effort

Tomas Brødreskift, his father and a dedicated team of volunteers have been working on a nearly no-budget, eight-year project to build a cutting-edge technology hybrid amphibian aircraft.  This past week, Equator P2’s wheels left the runway, twice on each of two days.  The team plans a full flight around the airport traffic pattern in the next few days.

Although brief, the runway runs demonstrated the hand control’s proper operation, similar to the hands-only controls used on human-powered aircraft.  In that instance, the pilot’s legs are busy pedaling, obviating the need for manual operation only.

In the Equator’s case, Tomas wanted simplified controls to make his aircraft a more desirable machine for future buyers.  He is, after all, an industrial designer, creating beautiful things that would otherwise be mundane.  He works with Classic Factory Automotive and Industrial Design, putting the “look” in exotic electric sports cars, bicycle frames, coffee makers, and designer watches, among objects. 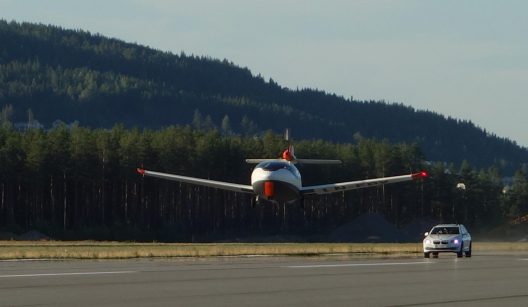 Self-funding construction for the past eight years meant slow progress, although still exceptional for a literally garage-based project.  The flight test prototype is truly hand-made, often by Brødreskifts’ personal craft or guidance.   Tomas has turned to Seedrs.com, a European investment and crowd-funding operation, to help expedite future development of the airplane and its production.  Unfortunately for American supporters of the project, Seedrs is off-limits to people on this side of the pond.

Perhaps Tomas will be able to return to earlier, even grander ideas.  His SeaSTOL personal jet (then called a Very Light Jet – VLJ) was an eight-passenger amphibian that would be a delight in which to fly and check out fjords and ocean-front property.  His comments on the project indicate he was even then being more practical with the P2.

“The SeaSTOL VLJ project was done whilst studying Industrial Design in Essen, Germany in 2008. But it has never been published at extent to date, and still remains a dream to be built in the future. Today I am managing a small aircraft company in Norway called Equator Aircraft Norway SA. We are developing a smaller seaplane called the EQP2. The SeaSTOL VLJ is still on our design table, and I hope to realize it. Please feel free to visit our website or more info on the Equator System as well.”

We wish Tomas and his project every success with the fulfillment of a long-deferred dream.  Hard work does make one lucky, we’ve been told.