Richard Glassock, of eight-seat, self-launching, sight-seeing sailplane fame, alerted your editor to a different kind of challenge in Africa that could expand the use of drones for positive outcomes.

An earlier and ongoing effort to provide “last mile” delivery of small, high-value items such as medicines and electronics to remote villages came from Matternet, a Palo Alto, California based group whose slogan, “Lifting the Rising Billion,” refers to its aspirations to deliver necessities in Africa, but was first demonstrated in Haiti in August and September of 2012. Here they fulfill a mission to Port-Au-Prince, Haiti, at a camp that was set up after the 2010 earthquake. The crowding, seen from overhead, would make expeditious travel through this camp almost impossible in any way other than air.

A new group, Flying Donkeys, hopes to raise the weight-carrying capabilities of Matternet’s small packages to 20 kilograms (44 pounds) and has established an “escalating series of sub-challenges” that will lead to a race around Mount Kenya in 24 hours or less by competing teams. Along the way, teams will pick up and deliver their payloads, recharge or refuel, and perform allowed maintenance services on the vehicles. Twelve mostly evenly-spaced “hubs” will provide services to the competitors. 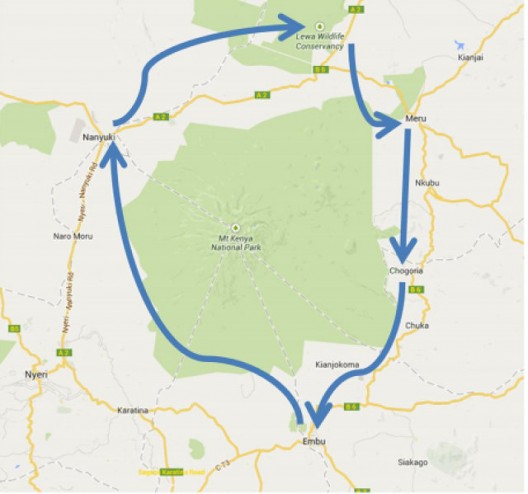 The planned route around Mt. Kenya, which may have up to 12 “hubs’ for operations

The competition is sponsored by La Fondation Bundi, a non-profit initiative of the Afrotech project at the École Polytechnique Fédérale de Lausanne (EPFL) and the Swiss National Centre of Competence for Research in Robotics (NCCR). The Bundi fund will be held in the philanthropic arm of the Lombard-Odier bank in Geneva.

This coalition of non-governmental organizations (NGOs), academic and banking interests hope to “pioneer a new transportation system for the world by developing robots with rugged air frames capable of safe and cheap unmanned flight of heavy cargo over long distances – the “Flying Donkeys.”

They foresee commercial operations by 2020, with vehicles carrying 20 kilogram cargo loads over 50 kilometers (31 miles) “in less than an hour along an established network.”

Committed to “majority African designed and assembled flying donkeys, the Foundation’s expectation that “tens of thousands of them will be operating globally within a generation.”

Challenges will include technical, legal, logistics and architectural and design  efforts, with “large awards” in cash to teams with the best solutions.  The foundation “will work to ensure flying donkeys are a friendly service, dependably exploiting the space above our heads to create jobs and enable e-commerce.”

The group defines a Flying Donkey as, “An authorized Unmanned Aerial Vehicle (UAV) that can carry Cargo, with a maximum takeoff weight of 60 kilos. Donkeys can be fixed or rotary wing, or even lighter than air, with combustion or electric power plants. (Since organizers don’t specify internal combustion engines, it would seem steam or Stirling engines are an option.) 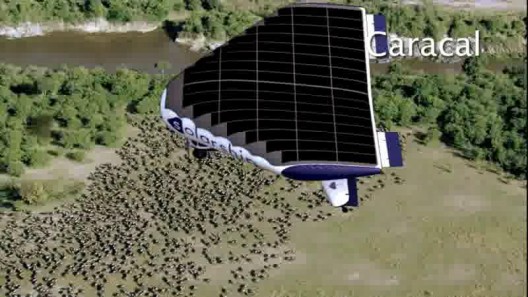 A Solarship might be able to offer short takeoff and landing capabilities necessary for remote operations.   www.solarship.com

Bargain hunters and scroungers might have an advantage, since rules state, “The total Bill of Materials (BOM) and energy consumption must be readily available and low-cost.”

First of the several challenges will take place in November 2014, but entrants must have already registered in October and submit their written application by December 2013. Teams will submit technical reports and videos in January 2014, face an interview in March and will receive their confirmation and grants in April. They must have their flight vehicle in Kenya in November 2014 for pre-flight inspections and mission assignments.

Since those initial missions are yet loosely defined, competitors may be hard pressed to optimize their entries for the contests. It should be extremely exciting to see how the various teams (up to 15) manage the challenges, whether this can lead to fulfilling the ambitions of the organizers.