A team in Japan has flown a low-power electric canard motorglider, and is now building a more conventional, lightweight electric aircraft.  Members of Aircraft Olympos Ltd. on the large island of Hokaido have been instrumental in building and flying everything from a jet inspired by one of Hayoa Miyazaki’s anime productions (Nausicaa (Dove) Of The Valley Of The Wind – 1984) to some fascinating electric aircraft.

Brian Carpenter met Tota Ueno, a worker on the project, and visitor at one of Brian’s maintenance classes in Corning, California.  Brian was selected by the National General Aviation Awards Committee as the recipient of the 2017 National Aviation Maintenance Technician (AMT) of the Year Award.  His classes in ultralight aircraft maintenance and two-stroke engine repair and maintenance obviously draw a worldwide audience.

Beyond that, he has been developing the EMG-6 ultralight, which can be powered by traditional two-stroke engines or one or more electric motors.  He’s been testing a series of motors and recently selected a Rotex package from the Czech Republic as a viable power system.  (More on that in an upcoming blog entry.)

Of course, he’d be interested in Ueno’s work with a highly creative group in Japan.  Beyond the anime-inspired machine, they have built very light, electrically-powered machines that manifest a different kind of flight – slow and elegant.

Note the controllable-pitch propeller and interesting solar fabric on the wings.  Most solar-powered craft such as the Solar Impulse or Eric Raymond’s Sunseekers have rigid panels encapsulated into the structure.  This fabric, as can be seen in the in-flight views, ripples in the airstream.

One wonders if the group, which has been in operation for over 32 years, designed and built their own 2.2 kilowatt motor, or if they chose some industrial design.  The chain drive allows a large propeller to turn slowly, essential to high efficiency.  For the 86-kilogram (189 pound) machine, this combination obviously allows flight in ground effect, with a mere 700 Watts necessary to maintain level flight.  Gunther Rochelt’s earlier solar-powered airplane, Solair 2, was able to maintain level flight on 755 Watts out of ground effect, so this is still impressive performance on what is essentially model-airplane power. 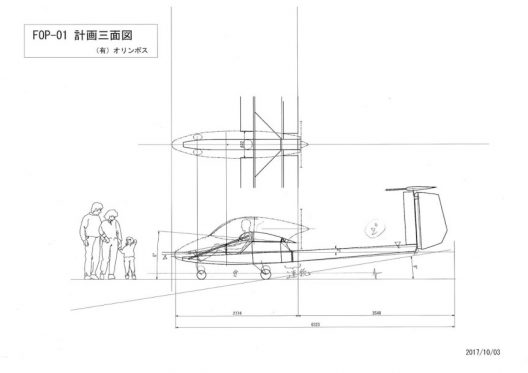 Olympos is working on a more conventional design. The FOP-01 Primary/Electric Motor Glider.  One hopes for their success and that they might share plans for this upcoming design.