Dufour Aerospace, based in Visp, Switzerland, and within sight of the Matterhorn, has been flying aEro 1, a Silence Twister-based electric aerobatic craft, for the last two years.  Read the pilot report on the surprising performance and the quiet flight experience in the aEro 1 to get some idea of how future flight will be a welcome relief from the noisy today’s noisy passage.  “Electric motors are so incredibly efficient. They have a huge torque and you will take off much faster than with regular engines. Our aEro 1 takes off after 70 meters of runway – at 2/3 of the available power.

“The first real takeoff and flight afterwards was really mindblowing. I set the power, took off, and checked the instruments, especially the engine instruments. And checked the engine instruments again. You hear the slow roll down of the tires as they stop turning. (Have you ever heard that in a powered aircraft?) You hear the wind noise around the fuselage. Flight with an electric aircraft is far quieter: you do not feel the motor running, there are no vibrations and you feel the wind and the air around you. It truly changed my view on electric flight.”

aEro 2 is Under Development

These comments from Thomas Pfammatter, one of the co-founders of Dufour Aerospace, help us understand why he and partners might be intent on expanding into greater horizons for electric aircraft.  Now the company is promoting its sky taxi vision, a simplified form of the vertical takeoff and landing (VTOL) vehicles being developed worldwide.

aEro 2 promises, according to its builders, “An advanced electric aircraft that brings you from your doorstep to nearly anywhere you want over 5 times faster than a car but at the same cost per kilometer.”  That phrase, “per kilometer” is important, since distances by air (as the crow flies) are usually shorter than road distances, with meanderings through rural and urban landscapes.  The example shown below yields a significant distance advantage to the aircraft, and an argument-settling savings in time.  Even an average wage earner would see a cost savings in the Dufour aEro 2’s travel time. 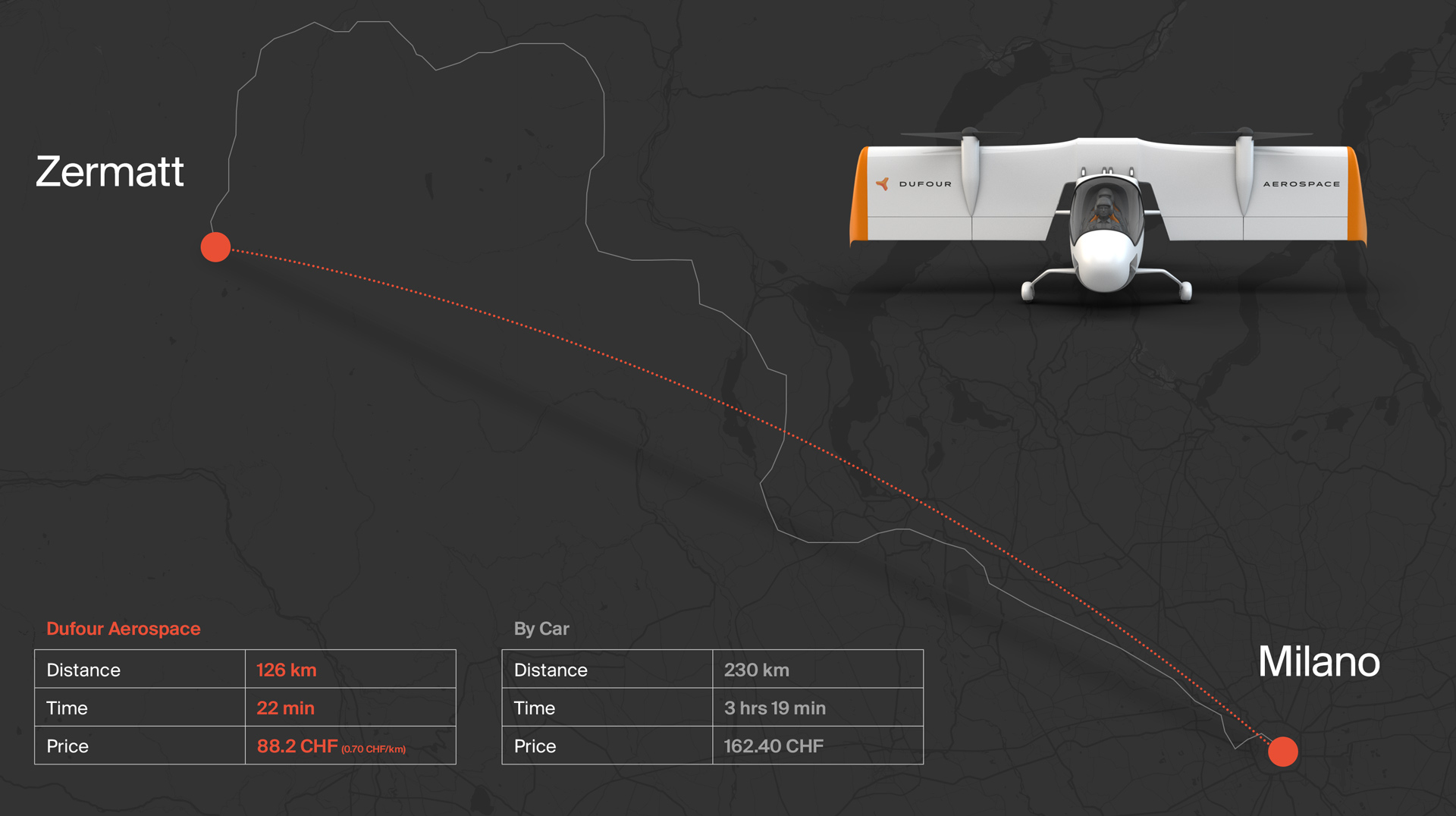 The firm has been carrying out detailed simulations of the anticipated flight characteristics and plans on testing a 1/3-scale prototype by October of this year.  Full-scale construction will begin in November, 2019, with initial ground tests taking place by the end of 2020.

The designers herald several design features that provide beneficial aerodynamics and handling for the craft.  The large, tilting wing provides “constant airflow over the wings, [giving] unmatched stability and control even in very slow flight.”  The large wing surface “makes it less vulnerable to vortex ring state in hover than any other aircraft.”  The wing enables a 12:1 glide ratio if all power fails, and a ballistic recovery parachute can safely bring the entire aircraft and passengers to a safe landing if necessary.

Quiet operation will enable aEro 2’s use in urban settings, and its ability to perform VTOL or STOL takeoffs and landings will give it the flexibility to use a great number of existing operational areas.

Thomas Pfammatter and co-founders Dominique Steffen and Jasmine Kent, have demonstrated their ability to launch a practical aerobatic single-seater with aEro 1.  That airplane is scheduled to receive a doubling of endurance and range with a new battery pack, making it even more practical.  aEro 2 will doubtless benefit from the team’s ongoing search for improved solutions for future flight.