Ph.D. student William Staruk, a member of the original HPH team, reflected, “Today you are seeing the first successful flights of the Gamera Solar-Powered Helicopter. You are seeing aviation history being made in the history of green aviation and rotary blade aviation.”

Staruk explained, “It’s just a matter of drift before [Solar Gamera] gets longer flights.  It’s easier to trim than human-powered helicopter thanks to electronic controls.”

Note the mechanical complexities in the original human-powered version, including the “lost-string” technique pioneered by Paul MacCready.  The electric version is less mechanically extreme, with software taking over some of the functions originally managed by a Rube Goldberg arrangement.

The flight had students and advisers extolling the virtues of the project.  Distinguished Professor and Gamera faculty advisor Inderjit Chopra beamed.  “This is about inspiring and educating students, that’s our product here.  No one thought that solar energy could lift a person [via helicopter].”

Gamera 2015-2016 team lead Anthony Prete (B.S. ’16) said, “When I started this, I had no idea what I wanted to do with my engineering degree.  This experience focused me into something, design.”

The project has been active form more than six years and involved more than a hundred students from across the Clark School in a project most would never have envisioned in their high-school years.

“’This project has come a long way in the past six or seven years from human-power to solar-power,’ added Staruk. ‘So we are breaking barriers of all sorts in aviation with this one airframe and we are very proud of that work here at the University of Maryland.’”

In 2013 AeroVelo’s “Atlas” won the prestigious $250,000 Igor I. Sikorsky Prize from the American Helicopter Society by reaching an altitude of 3.3 meters (10.8 feet)  under the pilot’s (Reichert’s) own power, and hovering for 64 seconds.   Although Gamera missed the gold, it achieved several subsequent records as noted above. 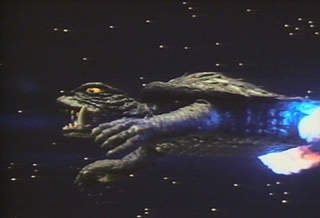 The interstellar turtle Gamera has a following in Japan, and will soon enjoy a new release

Gamera is named after a movie-star turtle, a large, pugnacious, flying, fire-spouting Testudine created by Daiei Studios to compete with  Toho Studio’s ever-popularGodzilla.  Gamera turned out to be less destructive than the competition and even protected children in his films.  A note of hope for Japanese rubber monster fans: a new version of Gamera is scheduled for release soon.