On July 12, at its St. Louis, Missouri plant, Boeing rolled out its Phantom Eye high altitude long endurance (HALE) aircraft.  Various members of the press and several bloggers took an opportunity to pelt the new plane with sobriquets such as, “flying bowling pin,” or “fat kid,”  failing to understand the aerodynamic advantages of the laminar flow fuselage.  A quick study of CAFE Foundation references would correct these reporters’ initial impressions.

Notwithstanding the apparently controversial aesthetics of the 150-foot span craft, the exciting news for green aviation enthusiasts is its power system – a pair of 15o-horsepower, 2.3 liter Ford Duratec engines, turbocharged and fueled by a “breakthrough” liquid hydrogen system.  The long wings, drooping in the press photos, will rise and pull up the flexible struts in flight, a great deal like some of the larger sailplanes of the 1930’s.  Sailplane efficiencies apply in this realm, with a projected cruising altitude of 65,000 feet at a speed of 150 knots (172 miles per hour).  This mirrors Marc Cook’s editorial note in Kitplanes that electrically-powered aircraft will be high altitude, low-speed flyers.  Payload is expected to be 450 pounds, large enough for a wide array of sensor and communications packages. 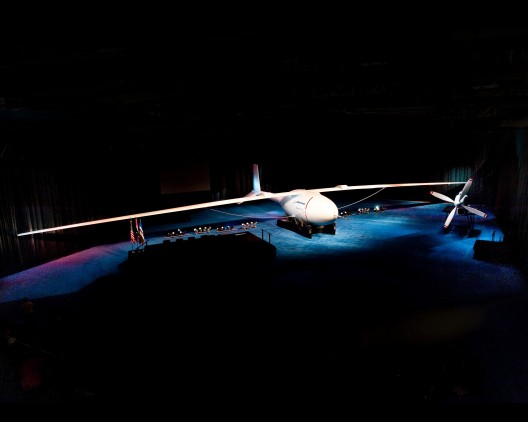 Darryl Davis, president of the Boeing Phantom Works, says, “The capabilities inherent in Phantom Eye’s design will offer game-changing opportunities for our military, civil and commercial customers.”  With an ability to stay aloft for four days, only three to four of these craft could provide intelligence, surveillance or communications to any point in the world on an uninterrupted basis.  This would provide much desired “persistence” in military operations, providing continual air “cover” for troops requiring real-time intelligence.  The ability to overfly areas of natural or man-made disasters would enable efficient marshalling of resources on the ground.

Ground and taxi testing will begin at NASA’s Dryden Flight Research Center at Edwards Air Force Base in California later this summer.  First flights, expected to last for four to eight hours, will take place early next year.

Phantom Eye is only the beginning of a larger program.  “Boeing also is developing a larger HALE that will stay aloft for more than 10 days and carry payloads of more than 2,000 pounds, and building ‘Phantom Ray,’ a fighter-sized UAV that will be a flying test bed for advanced technologies,” according to Boeing sources.