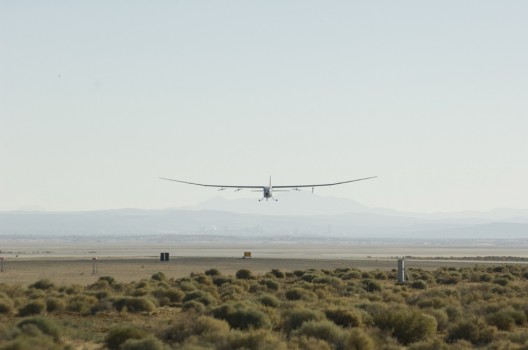 Meant to provide “persistent” communications and remote sensing capabiliies for military or civilian applications, the less-than-10,000-pound Global Observer can carry 400-pound payloads to 65,000 feet and stay there for a week on its four electric motors, which resemble larger versions of  the Astro-Flight motors used on Helios, Pathfinder, and other AeroVironment craft.

The airplane’s cruising altitude and “field of view” place it between smaller, tactical reconnaissance craft and satellites. 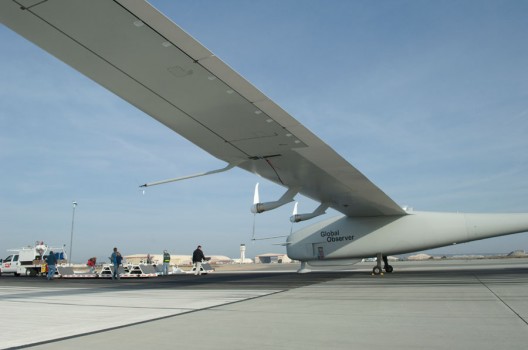 It’s 175-foot wingspan, large cargo pod and slender tail boom echo the configuration of the Boeing craft, but its small electric motors are a contrast to the hydrogen-fueled Ford engines that drive the propellers on the Phantom Eye.

Aviation Week reports that the AeroVironment craft made its first flight August 5, and will undergo an “operational utility assessment under a joint concept technology demonstration (JCTD) sponsored by several U.S. agencies and led by Special Operations Command.”   The first flight lasted an hour, all on battery power; subsequent flights will be hydrogen powered, with the expectation that the seven day endurance will be demonstrated by the end of testing. Hydrogen power will not be from fuel cells, at least initially, but the gas is burned in the internal combustion engine in the cargo pod, which in turn runs a generator that charges batteries to power the four motors. This arrangement allows for improved operational flexibility and redundancy, claims AeroVironment. 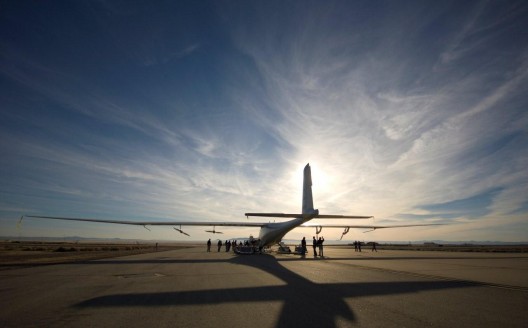 Lightweight hydrogen storage tanks required a special design and construction. Other systems also needed custom approaches. Kirk Flittie, AV’s Global Observer program manager explains that operation of the internal combustion engine at stratospheric altitudes produced a “unique compression solution.” A special starter generator created by Aerovironment’s electric vehicle division can provide 60 kilowatts of power, about 2.8 kW of which is “available to the payload.” The company has not released details of the hydrogen containment, special compression, or power system. AV indicates that fuel cells might be a viable energy source in the future as weight and costs decline.

Three GO-1s are being constructed, with two slated for the test program and one set aside as backup for the program. A 250-foot span GO-2 is proposed, with longer endurance and greater payload capacities. The company plans small-scale production of the plane, with up to five Observers to be crafted in the first year.