Hoversurf’s recent announcement of its use by Dubai police to patrol the streets and skies of the capital city brings forth several questions.  With Dubai and other Emirates readily encouraging new modes of transport, including sky taxis and possibly Hyperloop trains, the country seems set to lead a transportation revolution in the 21st century.

Already, style leaders and plutocrats crowd the streets with Lamborghinis and Bugattis: the police force fielding equally formidable patrol vehicles to control over-eager drivers.  Police inventories include a Brabus-tuned 690 horsepower Mercedes Geländewagen capable of off-road desert sorties, and at least one $1.6 million Bugatti Veyron for on-road speeders, along with a Porsche 918 and various Aston Martins.  Several other supercars ensure a fairly even pursuit against Dubai’s party crowd if necessary.

Not so fast and furious after October 15, speed limits on Sheikh Mohammed bin Zayed Road (311) and Emirates Road (611) have been reduced to 110 kilometers per hour (68.2 mph) hardly sufficient to clear carbon-laden valves in the country’s supercars, and making it much easier to ride herd on the eager throngs.

Which brings us to the nation’s potential overflight and oversight problem.  With eHang’s 184 and Volocopter’s 18-rotor 2X in trials around the impossibly high skyscrapers, how will their limits be enforced?  First, since most flights will be autonomous, what’s the need?  Second, since the Dubaian police will limit their Hoversurfs to 70 kilometers-per-hour (43.4 mph), how can they be of any use chasing down errant Fast-and-Furious wannabes?

Apparently, the police version of the Hoversurf Scorpion 3 will be limited to about five meters altitude (16 feet), and have only 25-minute’s endurance.  This will limit its use to hopping over traffic jams and delivering an officer to the scene.

Bigger Hoversurfs on the Way

Larger Hoversurfs are on the way, with one able to carry a 90 kilogram (198 pound) load, roughly equivalent to the weight of a pilot.  With no redundancy in the power system, a ballistic parachute might be the only means of a less-than-tragic crash, although your editor does not want to be caught under the 400 pounds total weight (estimated) coming down at even reduced speeds.

Interestingly, the company claims to have developed larger vehicles.  “Our company designs and manufactures cargo drones for various purposes that have already proven their efficiency in transport and premises monitoring, Arctic and terrain reconnaissance, geological exploration, delivery of equipment to remote locations, rescue & evacuation operations with the units’ carrying capacity ranging from 90 to 2,500 kg.”

With the same power layout (four motor-driven propellers at the corners), but with added wings and a pusher propeller, the Drone Taxi version, according to the makers, should be able to hit 300 kilometers per hour (186 mph) and travel 400 kilometers (248 miles), enough for a quick trip to neighboring Emirates. 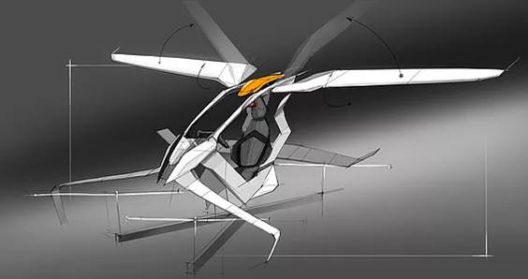 Hoversurf Drone Taxi has a rotor at each corner, but also wings and a pusher propeller

Purposes for Hoversurf’s machines could diverge in a dark wood, heading toward either Jetson or Bladerunner futures.  As with most technology, the ethical construct surrounding its use depends on the depth of understanding of the user. 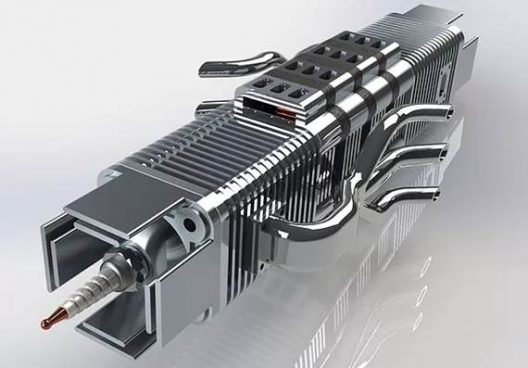 OTSAW and New Ways to Telecommute

In a related development, Dubai police are deploying OTSAW Digital’s O-R3 patrol vehicle, a self-driving, sensor-laden machine that carries its own quadrotor drone.

According to the firm’s Linked In page, “About the size of a child’s electric toy car, the driverless vehicles will patrol different areas of the city to boost security and hunt for unusual activity, all the while scanning crowds for potential persons of interest to police and known criminals.  Even with facial recognition attaining ever-better levels, one must still question probable cause or presupposition of guilt from evidence captured by a drone’s camera.

For that matter, will we feel “free” while knowing we are under constant oversight.

Not a Total Digression

OTSAW has a nifty item for those who might want to sleep in on meeting day.  Its Double is a roll-around dolly with a flat screen perched atop a stalk.  A person’s face can double for the missing person, making a sales pitch or fielding questions.  Perhaps, as with some court hearings these days, Double could fill in for the accused, electronically make bail and roll out of the courtroom – with the accused literally having never faced justice.  Trying it out will cost a purchase price of about $3,300. 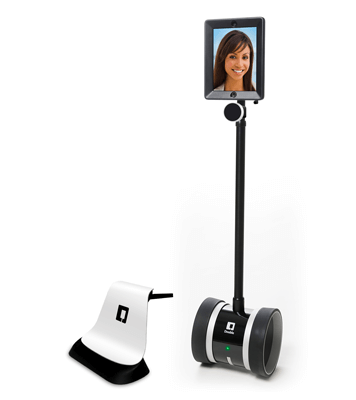 OTSAW’s Double will double for user, taking his or her place in meetings. On-board camera allows visual interaction with real people in room – or other Doubles

Plunging Into the Uncanny Valley

Your editor tosses this seeming digression in response to a similarly related story in the day’s news.  Saudi Arabia has declared a robot to be a citizen (Interesting in a country that has just given its women the right to drive).  Sophia is almost charming, even with the weird “hairdo.”  She speaks clearly, although a bit mechanically.  One wonders if we’ve come to the “uncanny valley” referred to by robot experts, in which robots become just “real” enough to attain a certain creepiness. See what you think of Sophia, and ask yourself about the implications of her treating us as nicely as we treat her.  Do we want our automated machines to be all that emotional?  What if those emotions are included in the programming for surveillance drones or traffic cop avatars?  Or in the automated cars or sky taxis we trust with our lives?