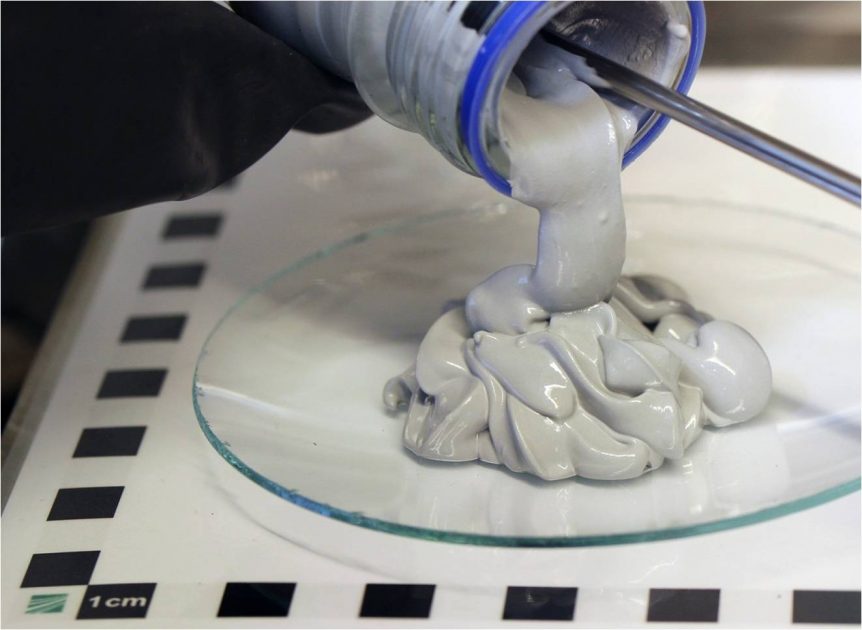 What if a different approach to storing hydrogen as a fuel gave benefits that are easily disbelieved?  Would this new fuel find approval and widespread adoption?  Ask the Fraunhofer Institute for Manufacturing Technology and Advanced Materials (IFAM) in Dresden, Germany.  The Institute has come up with something called Powerpaste, claimed to be, “A safe way of storing hydrogen in a chemical form that is easy to transport and replenish without the need for an expensive network of filling stations.”

(Fraunhofer describes the paste as a “goop,” not to be confused with the very different fluids marketed by Gwyneth Paltrow under the “Goop” trade name.)

We’ve seen hydrogen flying for several decades, with Michael Friend leading a Boeing project to launch the first fuel-cell powered craft in 2008 and Gérard Thevenot flying his H2 fueled “trike” across the English Channel in 2009 using only 550 grams per hour on his crossing, which took a little over an hour.

Some problems prevent adaptation of this technology a decade later.  Less than 50 hydrogen “filling stations” exist in the United States, mostly in southern California.  Only relatively local trips are practical at this time, and the number of hydrogen-fueled vehicles is not that significant.   As of March 21, 2020, “The U.S. has only 300 hydrogen cars (mostly in California) and only 48 retail fueling stations (43 are in California).  Only three H2 fueled cars are made by major manufacturers – the Toyota Mirai, the Hyundai Nexo, and the Honda Clarity.”

Only 6,500 H2 cars exist in the world.   That would mean no profit margins for their makers, and therefore almost negative incentive to push forward.  Obviously, lack of a supporting infrastructure is a big reason for lack of demand, just as hampering as the low number of charging stations was to battery electric vehicles 15 years ago.

Powerpaste in its raw form, as possibly packaged for consumers, and as produced by an industrial machine at room temperature and relatively low pressures.

Today, most hydrogen for vehicles has to be stored in high-pressure cylinders.  Transporting the gas is fraught with problems (if not dangers) and thus is costly.  Fraunhofer sees a change coming, however.  “Gasoline and diesel engines, which are powered by fossil fuels, will soon be sidelined by climate change. Instead, new propulsion systems will be required. One fuel with a big potential is hydrogen. Hydrogen vehicles are equipped with a reinforced tank that is fueled at a pressure of 700 bar (10152.6 pounds per square inch). This tank feeds a fuel cell, which converts the hydrogen into electricity. This in turn drives an electric motor to propel the vehicle.”

Obviously, anything stored at 700 times atmospheric pressure is an explosive threat in itself without adding the flammable nature of hydrogen.

Fraunhofer offers a different new way to avoid those hazards, while offering energy and power densities several times those of lithium batteries.

A Fraunhofer press release promotes the stuff.  “’POWERPASTE stores hydrogen in a chemical form at room temperature and atmospheric pressure to be then released on demand,’ explains Dr. Marcus Vogt, research associate at Fraunhofer IFAM. And given that POWERPASTE only begins to decompose at temperatures of around 250 °C, it remains safe even when an e-scooter stands in the baking sun for hours. Moreover, refueling is extremely simple. Instead of heading to the filling station, riders merely have to replace an empty cartridge with a new one and then refill a tank with mains water. This can be done either at home or underway.” 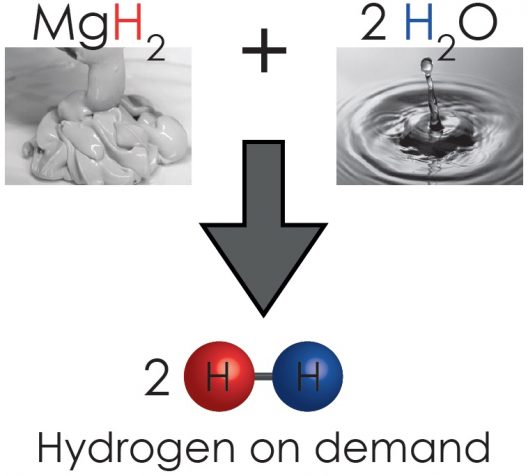 This blog examined the idea of cartridge storage and replacement as early as 2012.  A Hawaiian operation that offered scooter rentals with H2 tank swaps at their stopping points is apparently no longer in business, but similar operations in Taiwan are growing.  Taiwan is small enough that scooter company Gogoro has hundreds of battery swap stations all over the island, negating range anxiety.  Perhaps H2 swaps could work as well, with some makers looking at that option.

Fraunhofer’s video includes a wealth of information on manufacturing the material, distributing it, and using it.

Most promising, Powerpaste promises energy density equal to or greater than that of gasoline.  This would enable long-distance trips without range anxiety or the need to find charging stations.  Fraunhofer explains the energy density would allow higher ranges than compressed H2.

Fraunhofer notes there are not hydrogen stations in all locations, even in a small country like Germany with its 100 hydrogen stations currently.  Because the paste can be pumped without a high-pressure, lock-nozzle arrangement, a fueling site could have a simple drum of Powerpaste with a hand pump to serve scooter or motorcycle customers.  This could be expanded to more complex storage and pumping outlets as demand grew.

A Powerpaste pumping system would cost perhaps, “…Several tens of thousands of euros. By way of comparison, a filling station to pump hydrogen at high pressure currently costs between one and two million euros for each fuel pump. POWERPASTE is also cheap to transport, since no costly high-pressure tanks are involved nor the use of extremely cold liquid hydrogen.”

Alternately, Powerpaste could be delivered in ready-to-use, swappable containers like the battery packs Gogoro employs.  A driver could carry a spare, for instance, and trade used containers for new ones at service outlets.

Powerpaste would not only make electric scooters and motorcycles long-range vehicles, but could also provide extended endurance for drones.  Important in applications like survey work or medical delivery to remote locations, such fuel-cell powered vehicles could have great impacts on their respective fields.

Now under construction, a production facility at the Fraunhofer Project Center for Energy Storage and Systems ZESS should be operational by the end of the year.  Somewhat disappointingly, it’s scheduled to produce only four tons of Powerpaste per year.  Depending on public acceptance, let’s hope for success and expanded production soon after that.  Planes, trains and automobiles could grow the market enormously.