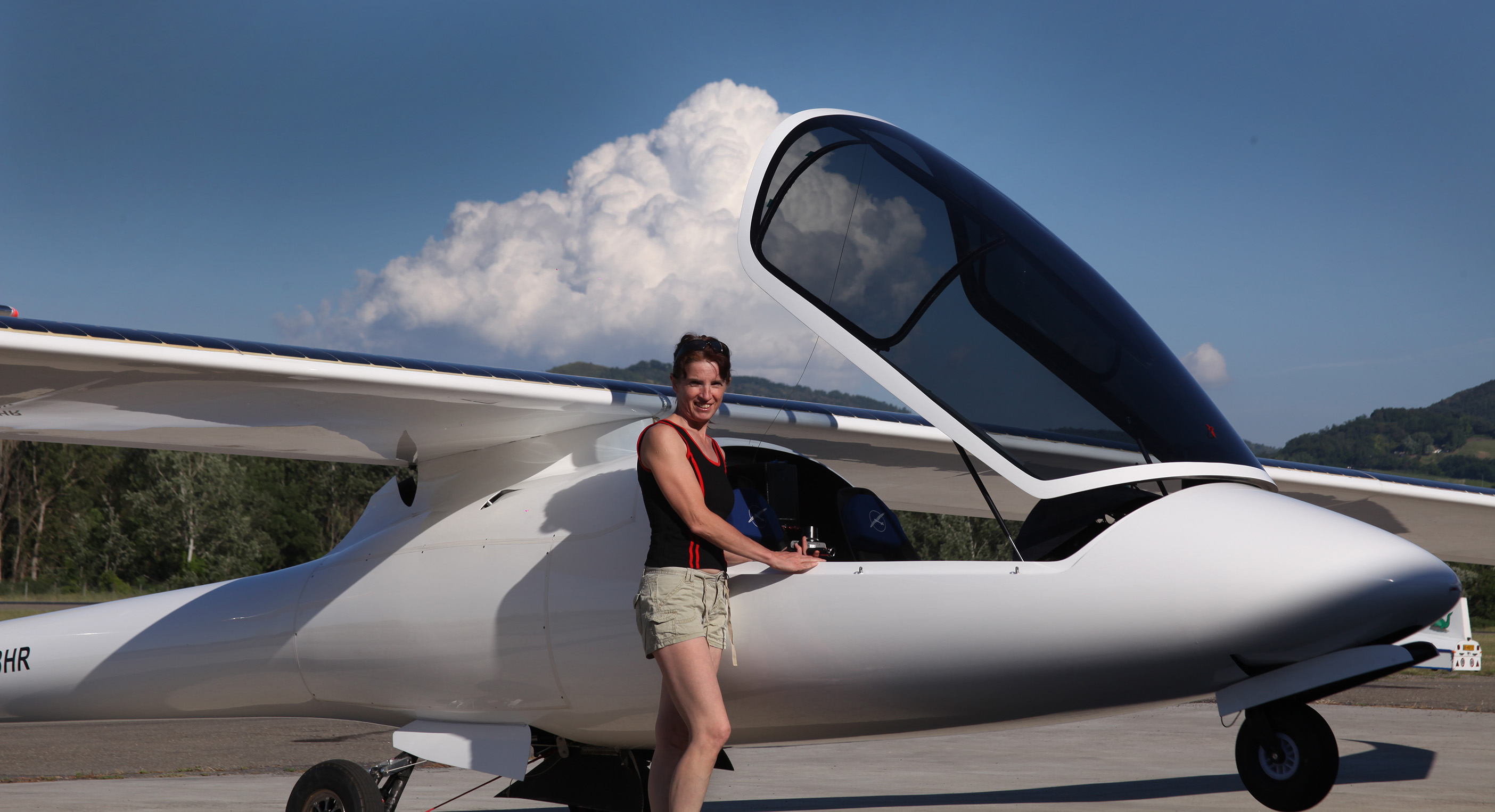 A few days after posting the entry on the Raymond’s first cross country flight in their new solar-powered Sunseeker Duo, your editor received followups from Irena and Eric.  First, Irena shares her impressions of what sounds like a beautiful flight.

“Our XC flight with Duo was a great experience.

“First of all, because I don’t like too many surprises, I tried to prepare myself as best as possible for this expedition. I was studying the aeronautical chart to get more familiar with the Italian airspace and possible restrictions, looking also at the terrain and possible out landings (just in case. of course).

“And then the day of our flight was coming, bringing us a clear, sunny morning. At the noon time, there was not much thermal activity at our area, but far in the mountains we saw towering cumulus. And the GO decision was done.

“Everything went smoothly; with the help of the motor we reached first soarable hills. We have been thermalling for a while and then we decided to go above the clouds. The words cannot express the beauty of the view when flying in between and above the clouds.  It is like being in a sweet dream.

“I was flying almost half of the time and I am becoming used to a long wing span. Before, I was flying mostly the DA20 and 15 meter wing span gliders, now Duo requires being much stronger on the rudder, in the turbulent conditions also on the stick. I enjoy thermalling with Duo, it allows me to fly very slowly: I was able to fly it at only 30 mph and this makes it very efficient for climbing. 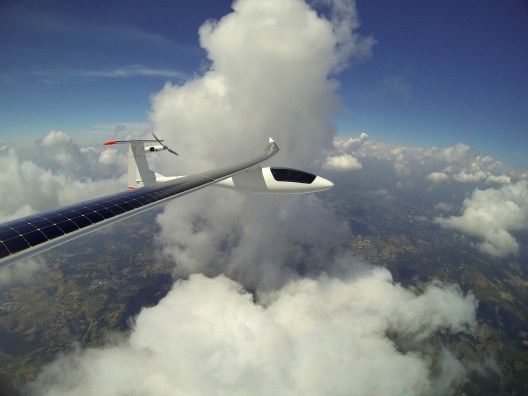 “In spite of the long wing span, it was easy to store the Duo in the Pavullo Aeroclub’s hangar because we folded the wings. I never really liked assembling and disassembling gliders because the wings are so heavy, especially for a woman. Duo, with so light wings is excellent so that. I can easily help Eric with [this task].

“Next morning we faced a surprise – strong NW wind (that means the strong headwind all the way back to our home base).

“The takeoff was really scary to me because of the rotors behind a hill. Later on we climbed again above the clouds and we even experienced the convergence. Eric has a lot of experience with that, for me it was the first time to fly in the convergence: unbelievably smooth, like flying in wave lift. 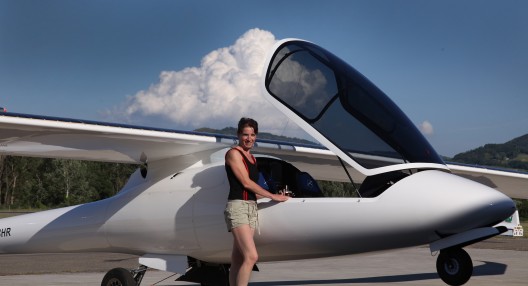 “It was surprisingly easy to come back to Voghera and I was happy to make very smooth landing. I am proud getting more and more experiences with not just flying the Duo, but also with takeoffs and landings.”

Eric had a concern with the photos your editor had chosen for the entry, and made a helpful suggestion.

“I think it would be better if you used at least one picture with the prop turning, such as the one in front of the clouds.  Otherwise I get more criticism that this is ‘just a glider, and not even a good one’, which I hear all the time.  We have plenty of stock photos of the plane taking off, but I hear people believing that it gets towed up by another plane, which is not true.  It does not have a tow hook.

“If you want to focus on the power side, which is important, The DUO is taking off with passengers up to 85 kg (187 pounds) and climbing at a good steep angle on 15 kW (20.1 horsepower) motor power. The climb rate is between 1.5 to 2 meters per second.  It has also taken off and climbed with only 5 kW (6.7 hp) – also with a passenger, but not much climb rate.  Altitude does not degrade the climb rate, at least not at 13,000 feet: we have not explored higher yet in the DUO.”  Readers can see the previously included video of the Duo performing quite capably here. 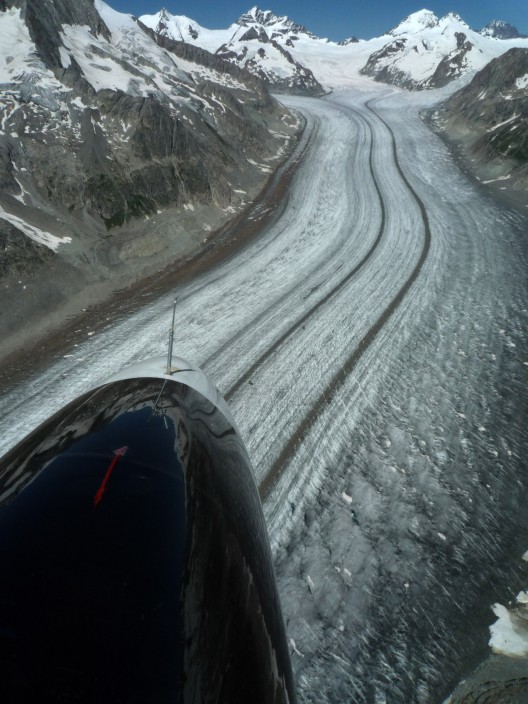 Seeing an alpine glacier at an altitude Eric enjoys. His canopy opens, allowing him to hold camera out in the slipstream

“In the single seat SUNSEEKER, it climbs just the same at 22,000 ft, and we expect the DUO to be similar.  The key factor is being efficient enough to slowly climb on the direct solar power.  Then with patience you can get very high.  Getting permission to be up there is another factor, and air traffic controllers expect you to transition out of their airspace, so they do not need to keep keeping track of you.  Since I often appear stationary to them compared to a jet, a typical question is; ‘What are your intentions?’ 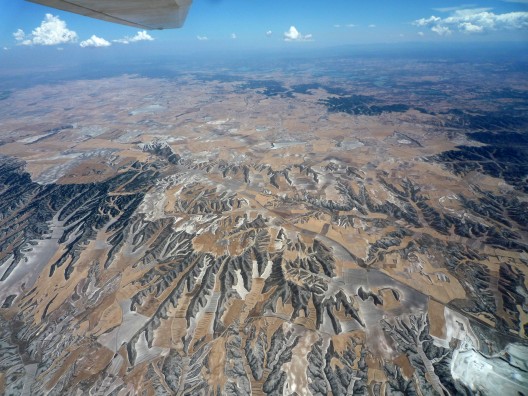 “While you can see really far from high altitude, something majestic like the Alps starts to look like just some rocks and snow from 22,000 ft.  I prefer to be at altitudes where I can see the details on the ground.  Erosion patterns in Spain, the cracks in glaciers, etc.”