Gary Davis of Greenville, South Carolina set a world altitude record for electric trikes, about the simplest of powered flying machines.  His flight to 4,790 feet above mean sea level (under 4,000 feet above ground level) exceeded his hope to reach at least 1,000 meters (3,280 feet) and puts him and power system provider Randall Fishman in the record books, at least when the Federation Aeronautique Internationale (FAI) ratifies the numbers. 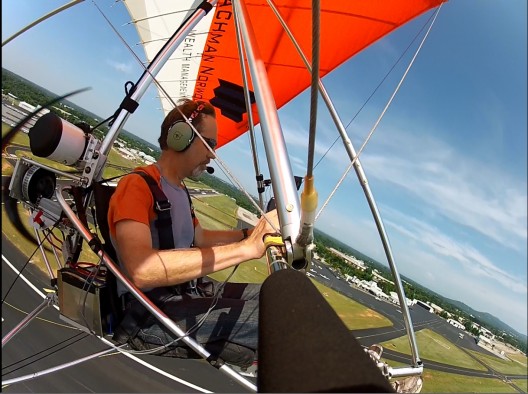 Davis, a managing director in Nachman Norwood & Parrot Wealth Management Consultancy in Greenville, has that affiliation discreetly emblazoned on his North Wing Stratus wing.  The company, possibly because of Davis’s interest, has 25 kilowatts of solar panels helping power its offices, and Davis and wife Deborah Meadows both drive electric cars.  In a telephone interview, he pointed toward Greenville as the home of Prottera electric buses, a point of local pride.

He explained the simple flight profile he maintained, a quick takeoff, steep climb and circling in thermals until his 47-pound battery pack shut down and he glided back to the Greenville Downtown Airport – where he was greeted by a waiting throng. 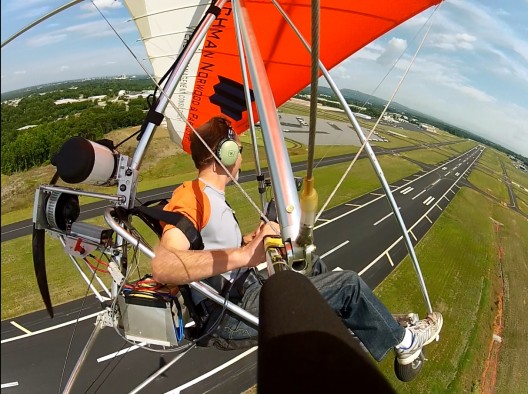 Over 200 people showed up to watch the record attempt, including the Mayor of Greenville, an observer from the National Aeronautics Association (American representatives for the FAI) and several TV news crews. 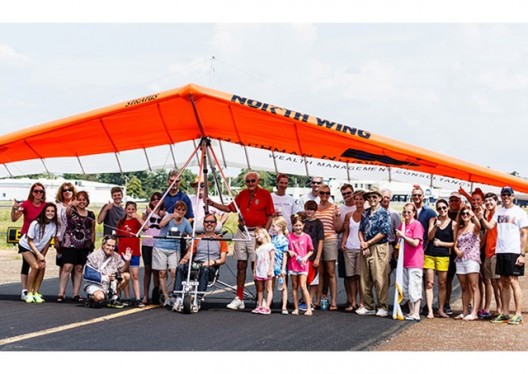 In an interview with the Aircraft Owners and Pilots Association, he sees himself as having set a challenge to others.  “I’m looking forward to people pushing the technology to where we go further, faster, and higher with electric,” Davis said. “The technology is going to be all about the batteries. That’s the key.”

He explains that his mount is a relatively inexpensive way to go record breaking, but that he is looking forward to building a carbon-fiber craft that could fly faster on less power to go after speed and distance records.   He hopes to attract a sponsor or two for that project.  As noted before in this blog, the record books are wide open for budget attempts at setting records in this new realm of powered flight.  He could also add a simple reduction gear and larger propeller to his trike, resulting in an even better rate of climb for future altitude attempts.

Fishman, who supplied the trike and power system, was delighted at the announcement of the achievement with his “medium” battery pack, especially in light of the 93° temperatures on the ground, a deterrent to best rate of climb.  Those watching the video will not discern any such problem.

We can only hope that Gary Davis will continue to go after new records – and find sponsorships to help make them happen.