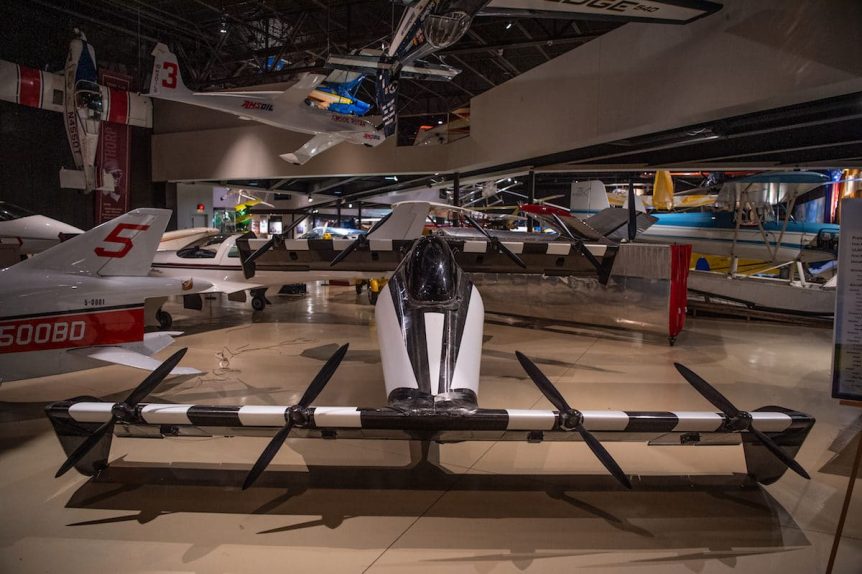 Two different machines, with vastly different purposes and unique looks, are flying electrically above Wittman Field for the worlds’ biggest airshow.  The Experimental Aircraft Association’s gathering, having skipped a year because of the pandemic, is back with nearly twice the number of attendees.  It’s a crowd ready to be rocked.

Helena Treeck, head of public relations for Volocopter GmbH, is on scene at AirVenture, not only promoting her company’s machines, but granting interviews and reporting herself.

She shares the experience.  “The crewed Volocopter 2X took off at 2:45 PM CST for a 4-minute flight at ~164 feet and a top speed of 18 mph over Wittman Regional Airport as part of EAA’s AirVenture aviation celebration. Event attendees were able to watch the Volocopter 2X fly and take a seat in the VoloCity model at Volocopter’s booth to experience these aircraft. Nicknamed the ‘World’s Greatest Aviation Celebration,’ more than 600,000 visitors are expected to come to see pioneering designs in action.”

Florian Reuter, Volocopter CEO, added his two pfennigs.  “Volocopter successfully conducting the first US public manned test flight of an eVTOL company in the US is a milestone for the industry and a reminder that our commercial launch is fast approaching. We can talk about our lead in certification, low noise emissions, and global partnerships all we want, but nothing shows just how close we are to launch UAM as a service as does flying an air taxi in front of crowds and inviting people to sit in our aircraft. Air taxis are coming, and we are working to bring electric flights to cities around the globe in the next two to three years.”

Helena adds, “In addition to a full-service solution, Volocopter is the first and only eVTOL developer to hold Design Organisation Approval and Production Organization Approval , two strategic certification approvals from the European Union Aviation Safety Agency (EASA) to design and produce aircraft in-house. Once certified for commercial launch in Europe, Volocopter is positioned for concurrent type certification approvals in the US from the Federal Aviation Administration (FAA), having applied earlier this year, and the civil aviation authority in Singapore (CAAS).”  Volocopter has performed over 1,000 test flights, including public flights in Paris (2021), Singapore (2019) Helsinki (2019), and Dubai (2017).

Dan Johnson on his ByDanJohnson web site, shares expert opinions about the Oshkosh displays, “Two industry experts gave me their judgment after viewing the Volocopter and BlackFly demonstrations. Both agreed the Volocopter presented better, performing a true demonstration of its vertical launch then transitioning to forward flight, maneuvering, and then doing a landing. Both also said the BlackFly was much less impressive. “They just kind of bobbed and floated around, not doing any maneuvering or making a transition to forward flight,” each agreed. Both wanted to like each aircraft but one clearly won in their minds.”

Perhaps some of these misgivings might have been overcome with a more aggressive display, much like the snowy flight shown in Opener’s video.  Interestingly, Opener notes their variants have flown 4,300 flights and cover over 35,000 miles.  You can find the company’s history here.

Marcus Leng, originator of the project says, “After tens of thousands of miles tested, we are thrilled to have showcased BlackFly and its potential.  This is an exciting time to be at the forefront of personal aerial technology, and we are honored to hold a place in history for the first public demonstration of a human-operated eVTOL fixed-wing aircraft.”

Opener donated a first-generation Blackfly to the EAA Museum at Oshkosh in 2019.  Its proprietary motors are the source of lift, control and its ability to display full control in any flight mode.  This is an outgrowth of an idea Burt Rutan floated to an automotive magazine years ago – distributed electric propulsion that would forego the need for control surfaces.

Think of the impact Rutan’s advice might have had on these aerial demonstrations.  A tiny Blackfly would zoom in from the distance, hover over the grass field, and settle to its landing-gear-free rest.  In the Innovation Center, videos of the flight from the nearby field to the flightline would review each day’s quick journey.

Regardless of the impressions left at OSH, both companies head toward a realization of their unique dreams.  Your editor, for one, cheers them on.