John van den Heuvel, Science & Technology Advisor (Innovatie Attaché) for the Netherlands Office for Science & Technology (NOST), and working in the Dutch Consulate General in San Francisco, wants people to know about his country’s innovative answer to bland or grating driving experiences.  It may even signal a first wave in freeing up freeways and opening new aerial vistas for commuters. 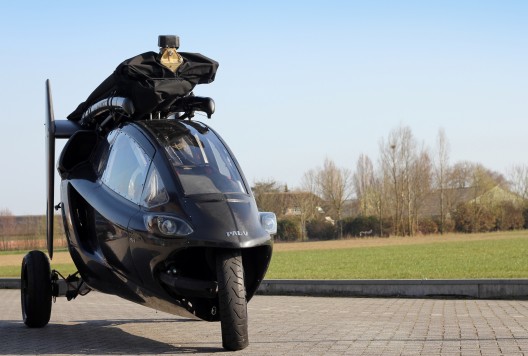 PAL-V, parked and folded up, waiting for its transformation

Think of the automobile commercials that show thousands of commuters trapped in grinding bumper-to-bumper traffic, only to be outdone by a spiffily-dressed, cheerful-looking soul who just happens to own the sponsor’s vehicle and to somehow find the magic exit road that takes the driver down open roads and past idyllic views.  We envy the thought, but most of us know it’s a fantasy.  The Dutch government is intervening and showing its ideas to the rest of the world through the PAL-V (personal air and land vehicle) which combines three-wheel ground vehicle and gyrocopter.

According to its makers, “The PAL-V is powered by a very robust, flight certified aircraft engine,” which runs on gasoline and can drive the two-seater at speeds of up to 180 kilometers per hour (112 mph) in the air and on the ground.  It’s intended primarily to fly below 4,000 feet in uncontrolled VFR airspace, although hints of mountain hopping show up in the promotional material.

Aerial performance is matched by its maneuverability on the ground, its leaning chassis allowing “carver” type cornering.  Transitions between flight mode and ground mode are quick and electrically powered, according to PAL-V’s makers, although finding places to take off when desired may require continued driving to an approved airpark.

Being able to switch between air and road has many advantages, but questions arise. What happens if several PALs launch at contiguous places?  What kind of pilot load will this add in areas where the greatest numbers of users might be expected?  Will there be safety measures available when such technology becomes abundant and popular?

Similar to concepts developed by Drs. Mark Moore and Brien Seeley, the Dutch program could be compatible with pocket airports and other hybrid aerial/ground designs.  Autonomous control systems that would allow integration into other air control systems will undoubtedly be necessary, with emergency responders and law enforcement agencies clamoring for drones and other uncontrolled aerial assets.  Flying in even the low altitudes its makers project could become crowded and some form of collision avoidance and sequencing will probably be necessary. 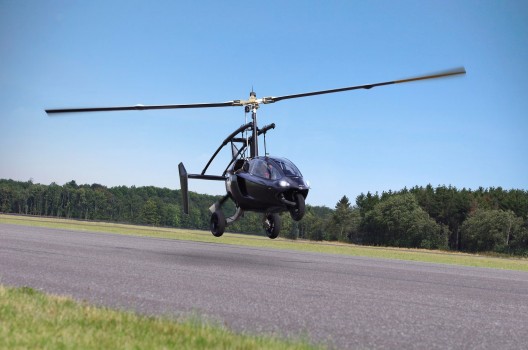 Much better than those transformers in the movies

One problem so far for PAL-V might be its noise level, which even though less disruptive than helicopters, would be greater than that for projected electric short takeoff and landing (STOL) air taxis.

Molt Taylor found that his Aerocar required up to nine different equipment and operator’s licenses in the 1950’s.  PAL-V’s developers claim a regular driver’s license and 30 minutes of training will cover ground operations, and a Sport Pilots license will cover aerial use in the U. S.   Even the relative ease of obtaining the latter, though, may be a hurdle for many prospective buyers.

Netherlands government support and enthusiasm seem to be high, and concepts abound for integrating the ground functions of this vehicle with its aerial possibilities.  That the government is planning occasional small landing strips for the PAL-V is instructive, although their spokesman also notes that not everyone will be allowed to operate such a device. 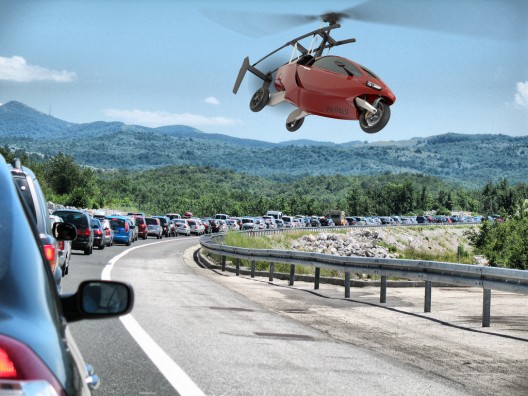 Not quite the Jetsons, but a way to get above it all

The Dutch see this as a first step, fusing the dreams of millions of commuters with a planned reality that could change the way we travel.  Even as it is, it’s a reminder of how resourceful thinking can solve some of our most pressing problems, and if nothing else, provide some pretty exciting machinery.