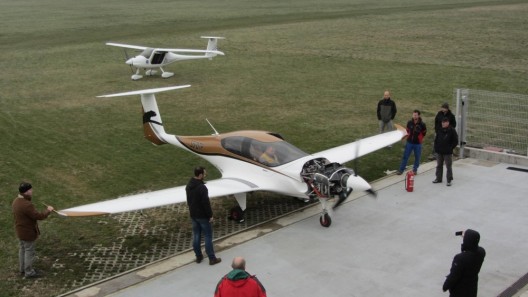 It is currently powered by a Lycoming IO-390, 210 horsepower engine.  At Pipistrel’s factory in Ajdovscina, Slovenia a team of engineers and technicians fired up the engine for the first time and performed ground runs, “verifying design parameters and engine operation.”

Pipistrel’s press release quotes Ivo Boscarol, their CEO: “It is very exciting to witness the tests and see the aeroplane come to life for the very first time. This is definitely a very important milestone in the development of Panthera. We look forward to the continuation of tests and the first flight soon!”

With the Lycoming powerplant, Panthera can take four people 1,000 nautical miles (1,150 statute miles while cruising at 200 knots (230 mph) and burning 10 gallons of avgas per hour – 92 passenger miles per gallon.   While not Green Flight Challenge level fuel economy (Pipistrel’s GFC winning G4 managed 403.5 pmpg), even the gasoline-fueled Panthera is relatively economical compared to competitive general aviation craft that require 16 or 17 gallons per hour for the same performance.

Pipistrel notes that, “The work will continue on functional ground tests and preparation for first flight, followed by a complete flight test program. “

Tina Tomazic is scheduled to discuss the coming hybrid and pure electric versions of the airplane at the 7th Annual CAFE Electric Aircraft Symposium, April 26th and 27th, in Santa Rosa, California.   He will give a second talk on “The Ideal Electric Trainer,” showing the range and depth of research and development activities at Pipistrel.