The U. S. Department of Energy’s National Renewable Energy Laboratory (NREL) and Stanford University have teamed up to create what may be the thinnest of thin solar cells – a peel-and-stick decal.

One micron thick, the decal-like  peel-and-stick, or water-assisted transfer printing (WTP), technologies were developed by Stanford researchers and have been used for nanowire based electronics.  Meeting at a conference where both made presentations, Stanford’s Xiaolin Zheng talked about her peel-and-stick technology, and NREL principal scientist Qi Wang spoke on his team’s research in thin-film amorphous solar cells. 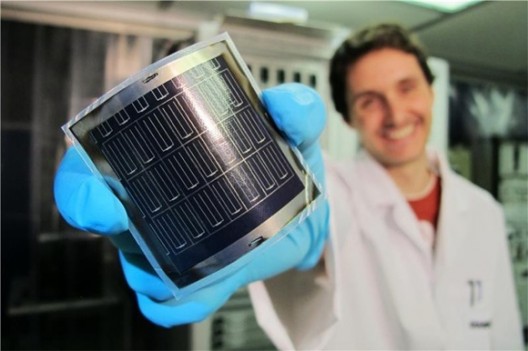 Zheng realized that the NREL had the type of solar cells needed for her peel-and-stick project, according to the NREL announcement.

The NREL press release explains, “The university and NREL showed that thin-film solar cells less than one-micron thick can be removed from a silicon substrate used for fabrication by dipping them in water at room temperature. Then, after exposure to heat of about 90°C for a few seconds, they can attach to almost any surface.”

“NREL’s cells could be made easily on Stanford’s peel off substrate. NREL’s amorphous silicon cells were fabricated on nickel-coated Si/SiO2 wafers. A thermal release tape attached to the top of the solar cell serves as a temporary transfer holder. An optional transparent protection layer is spin-casted in between the thermal tape and the solar cell to prevent contamination when the device is dipped in water. The result is a thin strip much like a bumper sticker: the user can peel off the handler and apply the solar cell directly to a surface.” 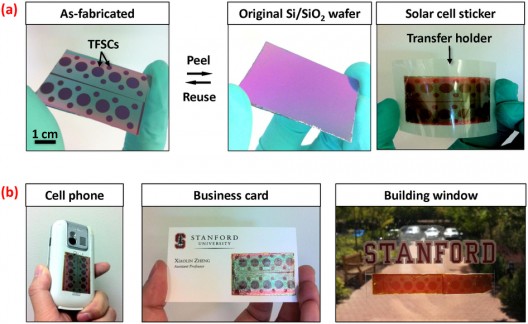 Wang reports the ability to peel the test cells with no degradation in performance.  Zheng noted that the cells can be applied to almost any surface “because almost no fabrication is required on the final carrier substrates.”  Applications include decal-like logos for windows, business cards that can power small electronic devices, and flexible panels that can be attached to cell phones, PDAs, and other portable devices.  The future may hold larger applications.  Future cells may be processed at higher temperatures and offer more power.

NREL is the U.S. Department of Energy’s primary national laboratory for renewable energy and energy efficiency research and development. NREL is operated for DOE by the Alliance for Sustainable Energy, LLC.

Thanks to Colin Rush for the lead to this story.