Perlan 2, the pressurized sailplane destined to attempt flights to the edge of space, made its first test hop Wednesday, September 23 at Redmond, Oregon.  It was towed to 5,000 feet above Redmond Municipal Airport, stayed aloft for about a half-hour, and alighted perfectly under the expert guidance of James (“Jim”) Payne, Chief Pilot for the Airbus-sponsored project.  Morgan Sandercock, Co-pilot and Project Manager, rode the back seat and had a turn at the controls. 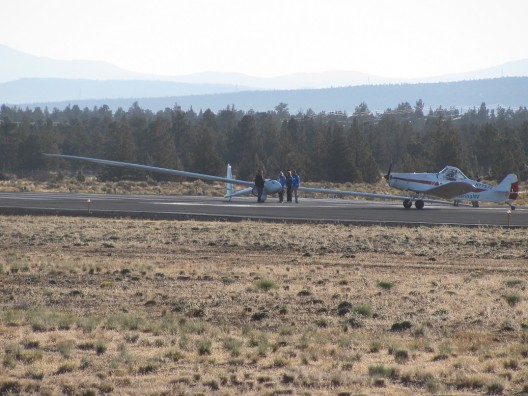 According to post-flight chat, James and Morgan found things to their liking, with everything, including the huge dive brakes, working as designed and as simulations predicted.  A video crew, on hand to capture the event, used a Bell Jet Ranger helicopter to follow Perlan 2 on tow and through the flight, and on-board cameras captured the release from the towplane and the precise touchdown.  At all times, the varied beauty of central Oregon formed a backdrop to the event. 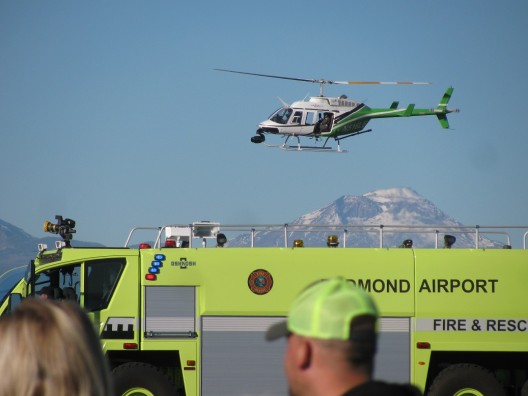 Designed by Greg Cole and built at Windward Performance in Bend, Oregon, Perlan was assembled at RDD in Redmond and readied for its tests.  Everyone involved deserves credit for superb work.  Greg continues work on his Goshawk, a two-seat touring motorglider that will be powered by an electric motor.

Airbus included this video on the Events section of their web site, showing the overlap between the planned terrestrial lofting of Perlan and Airbus’s anticipated forays into space and perhaps to Mars.  As Allan McArtor, Chairman and Chief Executive Officer at Airbus Group, Inc., pointed out at a press conference following the flight, Perlan will surmount all but three percent of the earth’s atmosphere, flying in a fluid density approximating that of the red planet. 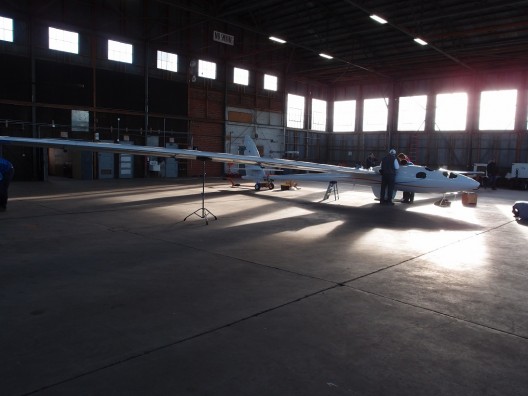 Your editor’s first sight of the finished Perlan, fresh from its appearance at Oshkosh and radiant in the morning light

Media attention has been intense.  Ethan Levi started that ball rolling last year by inviting Matt Wald of the New York Times to visit the sailplane, still under construction.  Ed Warnock, Morgan and Einar Enevoldson, founder and Chairman of the Board for the project, gave Matt a full day with the airplane, and the resulting article established press credibility for the project.

Since then, writers have found their way to Perlan, and a media crew was on hand for the initial test flight.  Kristina Messner of Focused Image and retained by Airbus to track the publicity surrounding the flight, compiled a mother lode of coverage, ranging from Al Jazeera to Wired, with worldwide interest and great enthusiasm.

Laurie Harden and her husband, Silvio Ricardi, brought their Piper Pawnee tow plane, with which Silvio gave Perlan a smooth pull to release attitude.  Stewart and Elizabeth Tatersall, tow pilot and instructor, respectively, for Soaring NV, Laurie and Silvio’s Minden sailplane operation, busied themselves constantly through Tuesday and Wednesday mornings, preparing and helping weigh Perlan.  Stewart and Jackie Payne, Jim’s wife, did a masterful job of taping the wings and tail on Perlan.

It was your editor’s privilege to be in the guest viewing section on Tuesday, when early tow tests were held with a ground-based vehicle pulling the large sailplane, and Wednesday, when the Pawnee performed an effortless tow to altitude.  The excitement in the crowd was palpable, with cheers ringing out over the field when Perlan released from the tow plane, and a half-hour later, when its wheel touched the centerline of the runway. 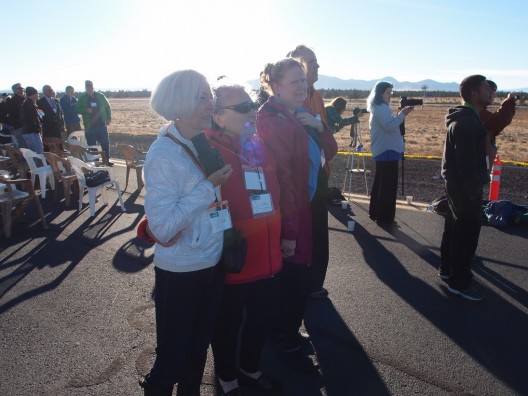 A press conference following the flight fielded questions from a global Internet audience while aerial videos taken just minutes before from the helicopter played on video screens flanking the speakers.  The good cheer and enthusiasm were unabated as the crowd sat down for a buffet brunch.  It was the finale to a historic flight and the culmination of a 23-year quest for Einar Enevoldson and over seven years of managing project affairs for Ed Warnock.

With the successful first flight behind them, the team now focuses on upcoming flights in Minden, Nevada and attempts to latch onto the Polar Vortex over Argentina in 2016.