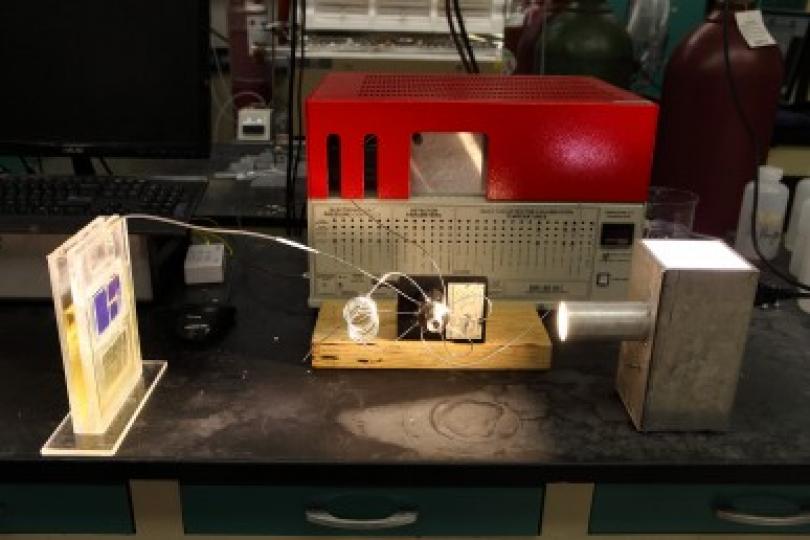 That’s what photosynthesis does in leaves – creates fuel in the form of plant sugars that flow into the plant to which the leaf is attached.  One of the main quibbles about trying to convert solar energy to usable fuel is the usual multi-step process involved.  Researchers at the University of Illinois at Chicago have made a major advance in creating a solar cell that captures carbon dioxide (CO2) and uses sunlight to make a synthetic gas that can be burned as fuel.

Scientists rarely use hyperbolic terms such as “extraordinary” in their findings.  According to Amin Salehi-Khojin, assistant professor of mechanical and industrial engineering at UIC, “What we needed was a new family of chemicals with extraordinary properties.”  They may have found that family, but their discovery is buried in the less grandiose phrasing of their paper’s abstract in the July 29 issue of Science.

That might sound like part of the secret menu at In-N-Out, but Illinois researchers had a different idea.  “Most artificial photosynthesis approaches focus on making hydrogen. Modifying CO2, as plants and microbes do, is more chemically complex. Asadi et al. report that fashioning WSe2 (tungsten diselenide) and related electrochemical catalysts into nanometer-scale flakes greatly improves their activity for the reduction of CO2 to CO. An ionic liquid reaction medium further enhances efficiency. An artificial leaf with WSe2 reduced CO2 on one side while a cobalt catalyst oxidized water on the other side.”

The abstract lays out how the nanoflakes expedite transformation of CO2 into CO.  “Conversion of carbon dioxide (CO2) into fuels is an attractive solution to many energy and environmental challenges. However, the chemical inertness of CO2 renders many electrochemical and photochemical conversion processes inefficient. We report a transition metal dichalcogenide nanoarchitecture for catalytic electrochemical CO2conversion to carbon monoxide (CO) in an ionic liquid. We found that tungsten diselenide nanoflakes show a current density of 18.95 milliamperes per square centimeter, CO faradaic efficiency of 24%, and CO formation turnover frequency of 0.28 per second at a low overpotential of 54 millivolts. We also applied this catalyst in a light-harvesting artificial leaf platform that concurrently oxidized water in the absence of any external potential.”

Researchers emphasize that their solar cell is photosynthetic, rather than photovoltaic, converting sunlight into synthesized carbon monoxide in an efficient manner with no batteries required (“the absence of any external potential”).

As a bonus, “A solar farm of such ‘artificial leaves’ could remove significant amounts of carbon from the atmosphere and produce energy-dense fuel efficiently.”

Salehi-Khojin explains, “Instead of producing energy in an unsustainable one-way route from fossil fuels to greenhouse gas, we can now reverse the process and recycle atmospheric carbon into fuel using sunlight.”  Synthetic gas produced by this artificial leaf is a mixture of hydrogen carbon monoxide, and can burned directly or converted into diesel or other Hydrocarbon fuels.  The team points out that, “Turn[ing] CO2 into fuel at a cost comparable to a gallon of gasoline would render fossil fuels obsolete.”

Converting CO2 into burnable forms of carbon is a reduction reaction, opposite to oxidation or combustion.  Salehi-Khojin explains that such catalytic reactions are inefficient and rely on expensive precious metals such as silver.  His team found their “extraordinary” catalysts in a family of nano-structured compounds called transition metal dichalcogenides — or TMDCs . and paired them with an unconventional ionic liquid as the electrolyte inside a two-compartment, three-electrode electrochemical cell.

The best catalyst is a nanoflake tungsten diselenide, which, Is more active; more able to break carbon dioxide’s chemical bonds,” according to postdoctoral researcher Mohammad Asadi, first author on the Science paper.  Another bonus, this material is 1,000 times faster than noble-metal catalysts and about 20 times cheaper.

Salehi-Khojin comments, “The combination of water and the ionic liquid makes a co-catalyst that preserves the catalyst’s active sites under the harsh reduction reaction conditions.”

The University’s press release provides an overview of how the “leaf” is constructed.  “The UIC artificial leaf consists of two silicon triple-junction photovoltaic cells of 18 square centimeters to harvest light; the tungsten diselenide and ionic liquid co-catalyst system on the cathode side; and cobalt oxide in potassium phosphate electrolyte on the anode side.”

Light energizes the cell, causing hydrogen and carbon monoxide gas to bubble up from the cathode, while free oxygen and hydrogen ions are produced at the anode.  The hydrogen ions pass through a membrane to the cathode side and become part of the carbon dioxide reduction reaction.

Co-authors with Asadi and Salehi-Khojin are Kibum Kim, Aditya Venkata Addepalli, Pedram Abbasi, Poya Yasaei, Amirhossein Behranginia, Bijandra Kumar and Jeremiah Abiade of UIC’s mechanical and industrial engineering department, who performed the electrochemical experiments and prepared the catalyst under NSF contract CBET-1512647; Robert F. Klie and Patrick Phillips of UIC’s physics department, who performed electron microscopy and spectroscopy experiments; Larry A. Curtiss, Cong Liu and Peter Zapol of Argonne National Laboratory, who did Density Functional Theory calculations under DOE contract DE-ACO206CH11357; Richard Haasch of the University of Illinois at Urbana-Champaign, who did ultraviolet photoelectron spectroscopy; and José M. Cerrato of the University of New Mexico, who did elemental analysis.