Slovenia, a tiny country which can be seen in its entirety from a light airplane, makes an astonishing array of such vehicles at the Pipistrel factory, awarded a European Union prize as the epitome of green manufacturing facilities. The company uses solar energy to power its operation and reports the number of kilowatts flowing through its plant on its web site.

Naturally, we’d expect an environmentally responsible firm to build environmentally responsible products, and Pipistrel is committed to going green.  Dr. Gregor Veble, Head of Research in the Research and Development Department; and Tine Tomažič, researcher and designer, shared a multiplicity of new products and gave an all-too-brief glimpse of a surprising future project with participants at the seventh annual Electric Aircraft Symposium at Santa Rosa, California.

With over 300 of their two-seat Sinus and Virus aircraft in service, and 50 Taurus G-2 recreational motor gliders surfing the high mountain waves, Pipistrel has a growing customer base, and seems to have a business plan designed to pull in even more. Their G2, for instance, already comes in either Rotax-powered or electrically-driven models, and has had a 40 kilowatt (53.6 horsepower) conversion for those who want to remove the noisy two-stroke and enjoy the quietness and emission-free flight of a Taurus Electro. Buyers can add an eight kW fast charger that can put them back in the air in 45 minutes to one hour, or store their G2 in a solar-charged trailer, which will keep their aircraft mission-ready between flights.

Others who want to make their gas-fueled mounts into green machines will now be able to install a retro-fit kit with 60 kilowatt (89 horsepower) motor, controller and 40-Amp-hour battery (now the largest pack offered by Pipistrel)  that replaces the 912 Rotax (or could be installed on an original design). This will provide 75 minutes cruising or several launches and retrieves if placed on a motorglider.

The Pipistrel pair took great delight in showing off the new Panthera, which can use auto fuel in its Lycoming IO-390 engine – the basic power unit initially offered. This gives a cruise of 231 mph on 10 gallons per hour. Future iterations will include a hybrid version driven by a 150 kW, 2,200 rpm electric motor which will get its juice from a leading edge, 110 kilogram (242 pound) battery pack in each wing. Cells will be recharged by a range-extending high-rpm turbo-charged internal combustion engine.

Performance figures will still be impressive, a cruise of 150 knots (172 mph) using only 6.5 gallons per hour and a speedy 190 knots (218.5 mph) giving a slightly less economical 8 gph, or 27.3 mpg. Pipistrel must be happy with these figures since they exceed initial specifications.

With the recent announcement of their relatively inexpensive Alpha Trainer, and its ability to touch and go around a pattern on only 2.75 gallons of auto gas per hour, an electric trainer would seem to be a hard sell. Gregor and Tine showed that they could improve on that already impressively economic performance with their Ideal Electric Trainer. Although they were reticent to discuss the appearance of the new aircraft, they did show a slide of a side-by-side comparison of the Alpha Trainer’s instrument panel and the electric alternative’s. If the rest of the new aircraft is as similar to the Alpha Trainer as the two panels, it will be similar in looks, with probably an even cleaner, tighter cowling than the existing craft’s.

The electric trainer could do 45 minutes in the pattern with a 30-minute legal reserve, and provide quick turnarounds, ease of use and maintainability, and probably greater reliability than even the proven Rotax-powered airplanes.

The Trainer uses, at $3.44 per gallon for regular unleaded, about $9.48 per hour in fuel according to Tine’s calculations. The Electric Trainer would use 11 kilowatt hours of electricity, or at average U. S. rates, about $1.34 an hour.

Keeping equivalent costs in mind, Tine explained that a mandatory overhaul on the Rotax at around 1,000 to 1,200 hours costs about $11,000. The motor on the electric trainer will probably go many more hours without major attention, but the plane’s battery pack will cost $15,000 to replace at a hoped-for 1,000 hours. Overall, operational costs will favor the electric version, with a total cost of $18 per hour compared to the gas-powered airplane’s $32 per hour – a saving of 45 percent per flight hour. The electric trainer will have an even greater advantage over standard trainers such as the Cessna 152, sparing the operator 73 percent of that airplane’s operating costs.

Pipistrel experimented with energy recuperation on the Electric Trainer, using an unusually wide, paddle-shaped pair of fixed-pitch blades with a 1.65 meter (65-inch) diameter absorbing 60 kW (80 hp) on takeoff and 40 kW (53.6 hp) at the continuous cruise setting of 2,000 rpm. Blade profiles have a convex airfoil surface fore and aft, with the goal of achieving adequate energy regeneration to allow an extra circuit or two around the pattern. With a projected 90-percent efficiency, a four-minute pattern and 1.6 kWh per pattern, and 13-percent energy recovery, engineers thought the airplane could provide seven trips around the airport with a 30-minute reserve on its 110 kilogram, 240 pounds of batteries and an all-up weight of 550 kilos or 1,210 pounds.
This performance relies on 150 Watt-hour per kilogram batteries, a readily-available commodity at the moment and likely to improve.

Flight tests have proven that regeneration requires a rapid descent to be useful, otherwise “coasting” does little to recharge the batteries. A brisk descent is excellent short-field landing practice, though, so not all is lost. 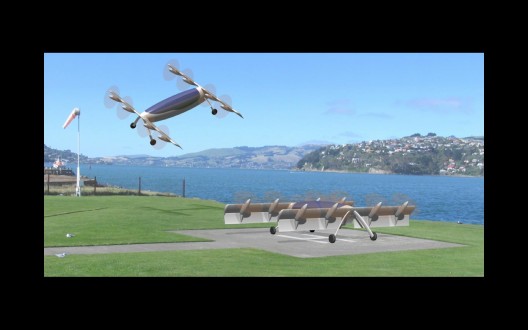 Gregor and Tine concluded their talk with a tantalizing hint of things to come, showing a picture of a tandem-winged craft with eight propellers, four to a wing. Each wing has large flaps, denoting the vertical takeoff and landing capabilities Pipistrel suggests. Imagine being able to fly for 30 minutes and go 50 miles in an emission-free device that would cost less than $50,000 – perhaps significantly less.  With no tail and extreme performance capabilities, pilots might need automated helpers for a safe passage, but such things are plausible in today’s era of autonomous flight.  This is somewhat similar to JoeBen Bevirt’s Monarch as shown at previous Symposia, and probably requiring the same level of automation.

This VTOL fun flyer would fit well in Drs. Moore and Seely’s pocket airports – and knowing Pipistrel’s follow-through capabilities, may be showing up at at an imminent airshow or expo.