Its translucent wing shimmering on the wall above Hall A7 at Friedrichshafen’s 2018 Aero Expo, A-I-R’s ATOS Wing commanded the attention of show goers.  A-I-R (Aeronautic Innovation Rühle & Co GmbH) produces a line of ultralight hang gliders and electrically-powered craft based on a common wing design modified for different weight and performance requirements.  Note the large wing at about 35 seconds into this perambulation around Hall A7, along with tantalizing glimpses of the other displays that we will cover in the near future.

Although ethereal in appearance, ATOS wings can carry significant loads compared to their minimal weight.  The 50 kilogram (110 pound) VRS 280, for instance, can carry an all-up weight of 330 kilograms (726 pounds), an impressive structural weight to gross weight ratio.  Coupled with the Wing’s 28:1 claimed glide ratio and 0.55 meters per second (108.3 feet per minute) rate of sink, the Wing will allow long, lazy glides from altitude and even permit modest cross-country flights. 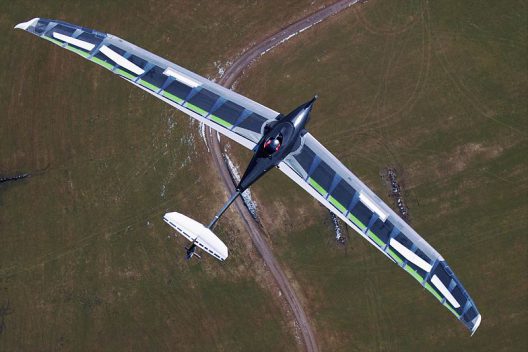 The electrified Wing fits in the 120 kilogram (264 pounds) empty weight category and can carry up to a 110-kilogram (242 pound) pilot.  The 506 pound total carried on a 14.5 meter (47.6 feet) span equals a very light span loading of 10.6 pounds per foot.  A high-performance 15-meter class sailplane such as a Windward Performance Duckhawk carries 19.5 pounds per foot of span.

Variations using different forms of the basic wing and the ubiquitous Eck/Geiger electric motors showed up at last year’s Greilinger Elektroflugtage (Greilinger Electric Flying Days). This was the second outing for the event and “A forum for the exchange of pilots among themselves and between the manufacturers of aircraft and components instead.  Devices were shown from the model airplane to the aircraft of the 120 KG class.”

As a report on the get-together explains, must of the hang gliders and “trike” setups had ATOS wings and Eck/Geiger motors.  A-I-R allows the use of its wing’s many variants on myriad platforms, and continues to develop new ways of exploiting their strength and aerodynamic finesse.  This efficiency enables surprising performance on limited power, and excellent gliding performance allows the use of smaller battery packs.

These ultralight developments could bring back, in a new and improved way, the old part 103, only transfigured into quiet, green machines with low operating costs and much better reliability than the noisy two-stroke engines that once powered these craft.  It’s a future for low-cost flight that is worth exploring.