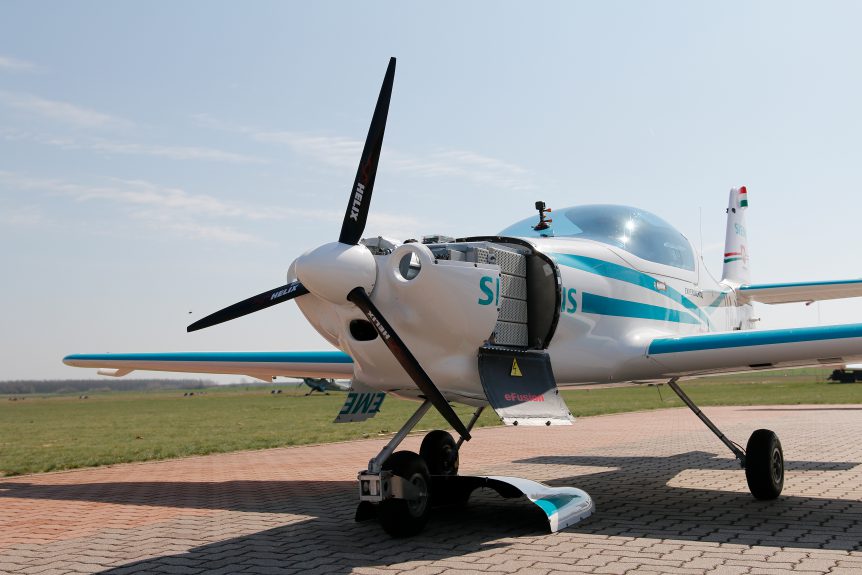 A U. S. Debut in Chicago

Mary Grady, writing in AVweb, reports that “Siemens brought its prototype electric aircraft to the U.S. this week for the first time, showcasing the airplane at the company’s Innovation Day in Chicago. ‘Electric propulsion is one of the transformative technologies that will help the industry meet the goals of reduced fuel, emissions and noise,’ said Teri Hamlin, vice president of electric propulsion for Siemens. ‘By accomplishing testing on our systems on select flying testbeds in the lower power classes, we are gaining valuable experience and knowledge that accelerates and validates our other developments in hybrid-electric propulsion systems in the high power classes.’“

Further testing of the technology will take place in Waco, Texas, at the Texas State Technical College Airfield.  The eFusion with its Siemens 55-kilowatt electric propulsion unit, “Will be key in data collection on new electric propulsion systems, enabling safety standards and certification efforts for the aerospace market.”  Lessons learned from the eFusion will benefit Airbus on their “City Airbus” demonstrator, a VTOL (vertical takeoff and landing) craft designed for urban mobility in conjunction with Roll-Royce and Siemens.

A Double-Play at Friedrichshafen

Following last season’s twin battery-powered Magnus eFusion formation flight at the Smart Flyer Challenge in Switzerland, Siemens and Magnus showed up at Aero Expo in Friedrichshafen with a battery electric eFusion and a hybrid eFusion powered by a Siemens motor and an EcoFly Diesel unit based on a Mercedes Smart Car engine. 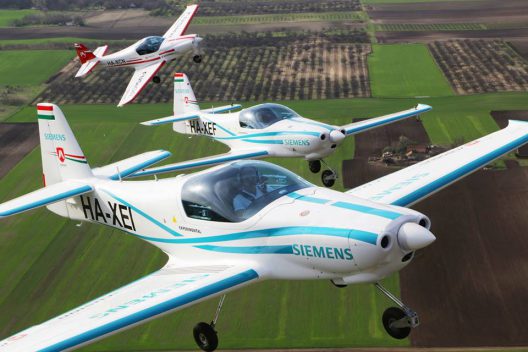 Siemens Magnus eFusions in formation, trailed by a Rotax-powered version

The battery-powered eFusion is very much what was shown at the Smart Flyer Challenge, with the addition of a new, compact inverter (see below).

The hybrid version manages to fill an engine compartment with a Siemens SP55D motor, an Ecofly 800-cubic-centimeter Diesel engine, batteries and electronic control gear.  The airplane doubtless loses some batteries, allowing the weight of the 89 kilogram (195.8 pound) engine to be accommodated.

Its frugal sipping of Diesel fuel or Jet-A at seven liters (1.85 U. S. gallons) per hour will enable this Light Sport Aircraft to range far afield   For comparison, the Magnus 212 on which the hybrid is based consumes 16 to 21 liters per hour, typical of Rotax-powered Light Sport Aircraft.  Because of this economy, Ecofly claims an astonishing range of 4,000 kilometers (2,480 miles) for the engine powering their FK9 testbed.

Hybridization might be an intermediate answer for light aircraft while we wait for the ever-promised 10X batteries of the future.

Although the Smart Car engine is not as aesthetically pleasing as many opposed cylinder flat-fours, its economical ways may win over many .

Siemens claims their tiny inverter has the highest power density for electric and hybrid-electric aircraft. Flying in their Magnus eFusion electric test plane, the Siemens inverter “SD104” uses silicon-carbide semiconductors and has a micro channel cooling plate. The power electronics fit in a box of 47millimeters by 94mm by141mm (1.85 inches by 3.7 inches by 5.55 inches)  and weighs only 900grams (1.98 pounds).  It delivers a maximum of 104kVA of propulsive power. 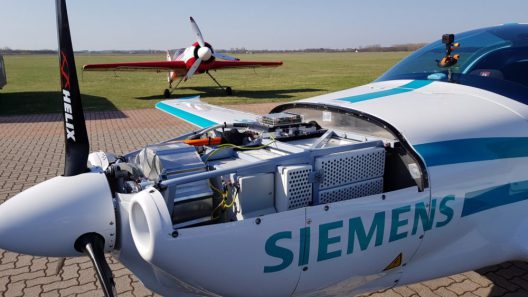 With ongoing efforts to develop power electronics and lighter, more powerful motors, Siemens seems to be positioning itself to provide electric propulsion to a wide range of aircraft – from ultralights to urban sky taxis to future airliners.