The Pou Guide site has news of this extremely small Flying Flea variant. Nedo Lavorini, a light 76 kilograms (167 pounds) flew his Pulce Electtrica (Electric Flea) of 74 kg (162.8 pounds – with batteries) on June 28, 2009 at 7:30 in the morning. An all-up weight of 150 kg (330 pounds) allows the use of four Chinese model airplane motors of 2 kW each to power the featherweight Flea. 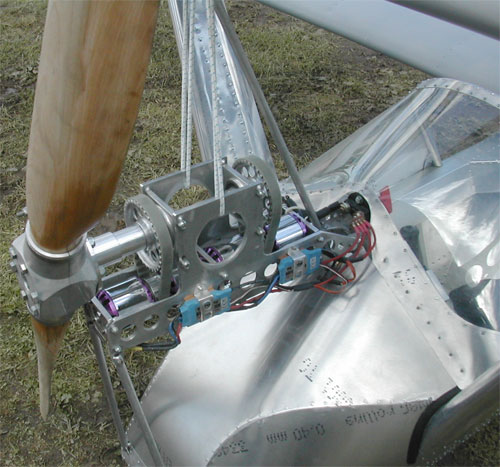 Motors are arranged in two pairs, each pair coupled to a reduction drive through a toothed belt, and all four driving a common propeller. 45-Volt, 64 Amp-hour Lithium-polymer batteries provide up to 40 minutes flying time, according to the Guide. The Pulce’s light weight and tandem wings of 5.3 meter (17.93 feet) span with a combined wing area of 13 square meters (just shy of 140 square feet), give a wing loading of a mere 11.54 kilograms per square meter, or 2.37 pounds per square foot – just right for the model airplane motors involved.

A mono-track landing gear with outrigger wheels for balance contribute to the light weight, and helped keep the little airplane straight on its 200 meter (656 feet) takeoff run on the paved surface of Lucca Tassignano airport. No attempts at taking off from grass have been made. After a series of short hops, to test the ability of the controllers to modulate motor power, to reassure Nedo that battery temperatures were in tolerances, and that the airplane maneuvered in a predictable way, a flight of several minutes was made, including a turn of 180 degrees and an “impeccable” landing.  Observers found that there was still “residual lifting capacity” in the battery pack.  Toasts were given and a general celebration followed the successful flight.

The Guide shows two different landing gear configurations, although the narrative implies that the big flight was made on the mono-track type gear.

Even the price was small and the burden light on the wallet for this diminuitive craft, an investment of only 3,850 Euros (about $5,400).