With this year’s Electric Aircraft Symposium just a few days away, the next few blog entries will close out reviews of presentations from EAS V.

Krish J. Ahuja, Regents Professor at the School of Aerospace Engineering and the head of the Aerospace and Acoustics Technology Division at Georgia Institute of Technology, talked on “Quiet Propulsion for Small Electric Aircraft.”

Dr. Ahuja came with great credentials, including his 1993 AIAA Aeroacoustics Award and being listed as one of top 50 Innovators by Aerospace magazine, 1995 and one of top 50 Technology leaders in the US by Industry Week Magazine.

He started by examining the sources of aircraft noise.  Internal combustion engines (ICEs) are inherently noisy, but propellers add to that noise by their thickness, speed of rotation and the amount of loading they bear in producing thrust.  Converting air from low to high pressure as it moves through the propeller’s blades generates noise.

Most annoying, the rasping shriek that comes from propeller blade tips nearing the sonic barrier is often heard in aerobatic demonstration acts.  While it may thrill airshow crowds, it does not endear airports to neighboring communities.  Keeping blade tips below Mach 0.65-0.70 reduces the formation of shock waves and the associated noise.  Having more blades on a propeller and shaping each blade in the form of a scimitar helps reduce the load on each blade and allows lower rpms. 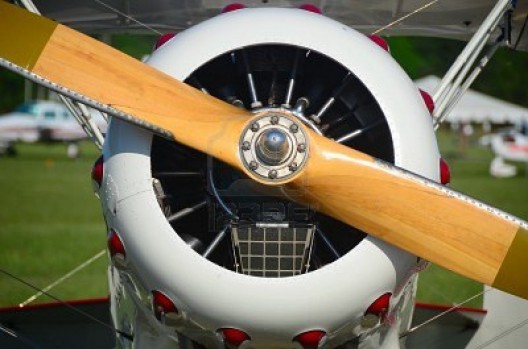 From the dawn of aviation - the propeller we're used to seeing

Dr. Ahuja noted that electric motors can be noisy, too, with contributions coming from their internal workings and makeup and the motor’s installation in an airframe.  As with gas-powered engines, electric motors get noisier with speed, and their structural and aerodynamic surroundings can amplify that noise.

Things will need to get very quiet before they allow neighborhood air parks to become a reality.  Dr. Ahuja explained that a typical neighborhood has an ambient noise level of around 60-65 dBa, and that propeller noise would need to be 12 dBa lower (48-53 dBa) to be masked by the normal background.  Since decibels are measured on a logarithmic scale and 3 dBa represents a doubling of sound pressure, this would be a level four orders of magnitude lower than normal quiet street noise.

Propeller design can lower noise levels, but Dr. Ahuja suggested that active noise control somewhat similar to what happens in noise-cancelling headsets could hush aircraft sound, and that simply “synchro-phasing” propellers on multi-engine craft to the same rotational speed could lower interior sound levels 8 dBa.  This could be done without weight penalty.

Writing from daily experience, this writer hears a Beech Baron from a local flight school fly overhead several times a day.  Assuming the student pilots are following roughly the same pattern and altitudes, it is amazing how noticeable the difference in sound levels is when the engine speeds are relatively close or horribly out of synch.

Could we get rid of the propeller? Maybe

He suggested other means, such as channel wings which would direct sound away from the ground, or acoustically-lined ducts that would shroud a propeller totally – all while increasing thrust.  Noting that electric motors don’t suffer from scale effects as ICEs do, he examined spreading a number of small electric motors along a wing, all driving smaller, lower-noise propellers, as was done on the AeroVironment Helios and Pathfinder.

Tying in with Robert Englar’s talk, he suggested circulation control that vented thrust from props through wing trailing edges, or even an adaptation of the Dyson “bladeless” fan, which circulates air through a circular outlet and accelerates it.  What Dyson fails to mention in its promotions, though, is the bladed fan in the base of the fan, essentially a version of Englar’s directed and channeled thrust.

At the empirical level, Dr. Ahuja’s students mounted two- and six-bladed propellers to an engine, set the engine on a stand in a pickup bed, and did drive-by noise measurements.  True to theory, the six-bladed prop showed an 18.7 dB sound reduction over the two-blader.

Configuring propellers is also essential to enhancing quietness, with special emphasis on blade count, thickness (especially at the tip) and geometry, with scimitar-shaped tips and their increasing sweep lowering noise.