The Lola-Drayson LeMans Prototype (LMP) did not make it to this year’s LeMans race at the Sarthe track, but did make its racing debut at another prestigious motorsports event – the Goodwood Festival of Speed Hill Climb in England.  Nowhere near as long or treacherous as America’s Pikes Peak event, the race is a good test of acceleration, handling and sheer power, which the car displayed with great style.

Lord Paul Drayson, a former science advisor to the Crown, drove the B12/69EV, a car crammed with new technologies, many of which have been reported on in this blog, and which have potential applications in aircraft.  He also set a new record for electric cars in the climb, doing a timed run of 53.91 seconds and placing 11th overall in the July 1 run.  Goodwood’s hill climb is only 1.86 kilometers (1.16 miles) with a mere 9 turns, and the fastest official time up the slope was the 1999 McLaren F1’s 41.6 seconds for a speed of 100.385 mph.  Formula 1 cars were banned for safety reasons, after several accidents and deaths marred these attempts.  Oddly, the video gives little sense of the dangers involved.

B12/69EV’s key technological innovations include structural batteries developed by BAE Systems.  Two years ago, the blog reported on Dr. Emile Greenhalgh’s findings at London’s Imperial College that a sandwich of carbon fiber sheets on either side of a fiberglass sheet could store electricity – just like a battery.  Volvo picked up on this and is incorporating components that not only provide structural integrity, but extend the range of electric vehicles.  According to BAE, “For the Lola Drayson B12/69EV, Structural Battery technology offers the opportunity to house power for some onboard electronic systems within the structure, allowing the main batteries to be dedicated to propelling the car. We are working in partnership with Lola’s engineering teams to develop the manufacturing processes and techniques to scale the capability from existing laboratory demonstrators to meet the structural and power requirements for large scale applications.”  These “large scale applications” could conceivably include full auto-body batteries. 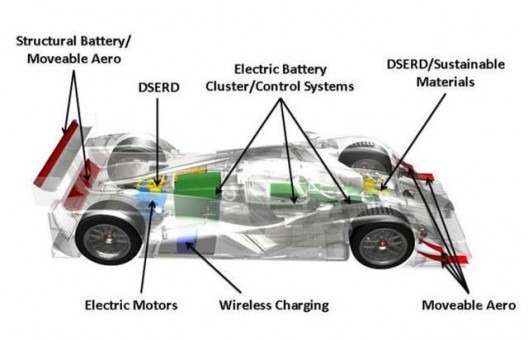 KERS (Kinetic Energy Recovery Systems) are normally associated with braking or (on internal-combustion cars) exhaust heat recovery converted into stored power in batteries or flywheels.  Multimatic supplies the Lola with shock absorbers that convert suspension action into a source of battery recharging.  These DSERD (Dynamic Suspensions Energy Recovery Dampers) take energy that would otherwise be dissipated and transfer it to capacitors that store it for power bursts or energizing other onboard systems. 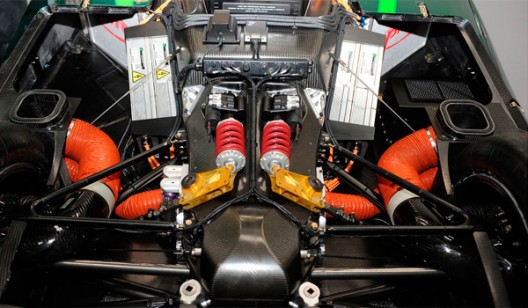 Batteries are a special blend of A123 nanophosphate units assembled into a $250,000 pack by Bill Dubé and undoubtedly assisted by his wife Eva Hakanssen, both speakers at this year’s Electric Aircraft Symposium.  The cells provide 15 minutes of extreme power, more than enough to tackle even Pikes Peak.

Motors are derivatives of the Oxford YASA (Yokeless and Segmented Armature) units, and all together put out 850 horsepower.

A plate beneath the car can pick up electrical energy from a ground-mounted plate and inductively recharge the car’s batteries without a plug-in connection, thanks to Halo IPT (Inductive Power Transfer) technology.  This may be developed into a system where race tracks or roads could have charging strips installed under the asphalt or concrete to power EVs without the need to stop for recharging at all.  Such inductive charging schemes are being planned for European airports, where wheel-driven landing gear on aircraft would reduce fuel needs by 15 to 20 percent on short-haul jetliners.

As a grace note for the environment, the Lola-Drayson incorporates many recycled carbon fiber materials in its construction, adding to the luster of its British racing green finish.