Quantum Systems GmbH, located on the Dornierstraße (aptly named after a pioneering German aviation firm) near Munich, makes small eVTOL  (electric Vertical Take Off and Landing) vehicles with large missions.  Quantum’s Tron and Trinity drones offer two platforms for deliveries of small packages, performance of surveillance and mapping, and providing tactical observation.  Last week, the company demonstrated a key benefit of using their Trinity drone to speedily deliver “more than 15 urgent corona (SARS-Cov-2) test samples.”  It was a seven-minute “Quantum leap” from a mobile corona test station on the Theresienwiese to the Munich laboratory.

True to press release writing, Quantum adds a bit of drama to the story.

“Gilching, Deutschland, June 4th, 2020. The physician in protective clothes inserts the swab into the tube, asks the older man a few specific questions and marks the note “urgent sample”.

“Last week Quantum-Systems GmbH and laboratory Becker & Kollegen tested the transport of samples, by drone.  Timely results may have major influence on chain of infection.

“Urgent samples must be delivered to the laboratory as quickly as possible. This is the case, for example, when a timely test result has a decisive influence on the choice and success of therapeutic measures for a patient. In the event of a pandemic, a few hours may have a major influence on the development of the chain of infection. ‘I am concerned about the individual behind each sample and the well-being of the patient in terms of the quality and speed of the findings,’ says Marc Becker, M.D. ‘In this particular case, however, it is also about reducing risks for the many people involved in the provision of our laboratory services, such as doctors, courier services and assistants.’”

“During a test flight, the autonomously operated Trinity F90+ drone from Quantum-Systems transported 20 sample tubes in less than seven minutes over the 6.4 km (~4 miles] flight distance from Theresienwiese to the laboratory in Frührichstraße. According to the statement from a courier driver who regularly makes the ride between the test station and the laboratory, it often takes an hour or more to travel by van under normal Munich traffic conditions. He has rarely carried more than 15 urgent corona (SARS-Cov-2) test samples. The advantages are obvious: transport by drone is 8 to 12 times faster, emission-free and virtually noiseless.”

Quantum makes two fixed-wing craft; the Trinity and the larger Tron, both capable of serious, but different deployments.

Tron, larger with its 3.5-meter (11.5-feet) wingspan, carries a larger payload (up to two kilograms or 4.4 pounds).  This allows Tron to perform some impressive tasks using impressive hardware attachments.

Note the flat angle of attack when all four motors are turned off.  Quantum claims a 22:1 glide ratio, and with no power, Tron could glide silently over an area, helping to obtain images of wildlife or illegal gatherings.

A suite of small sensor and communication payloads makes each drone highly versatile.  Using LTE (Long Term Evolution) 4G networks and pre-planned routes, either craft can capture data which can be evaluated using PPK (post-processing kinematics) and RTK (Real-Time Kinematics).  These two functions cancel errors that might occur in reception of the GNSS (Global Navigation Satellite System).  Coupled with ADS-B (Automatic Dependent Surveillance – Broadcast) on-board the flight vehicle, the Quantum-System iBase Ground Reference Station powered by u-blox communicates with and controls the aircraft.  On a small scale, the situation mirrors eHang’s autonomous flight, monitored and if necessary, controlled by a ground-based system. 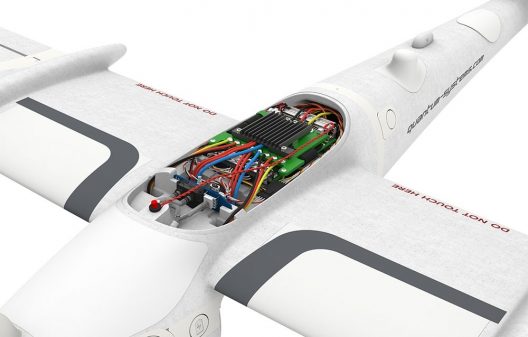 Quantum autopilot is heart of autonomous operation for Quantum drones

Either drone can visualize the earth below through RGB (Red Green Blue) sensors or multispectral means.  These systems are packed into a compact unit in the cargo bay of the machine.  In the video below, the machine carries a Sony camera (some versions with up to 42 megapixel full-frame sensors capable of resolving 1.3 centimeters from 100 meters (328 feet) altitude.  Visual records combined with the ability to discern hydrological and vegetation patterns enables users to optimize land use.

Quantum makes two other drones, the rotary-wing Scorpion and the fixed-wing Vector, more intended for governmental and tactical applications.

The powerful capabilities belie the almost hobby-like sizes of the drones.  They are capable of providing quick deliveries of essential materials and bringing back real-time data of great importance to the user.  Their systems emulate those of bigger machines and may provide future directions for UAMs.