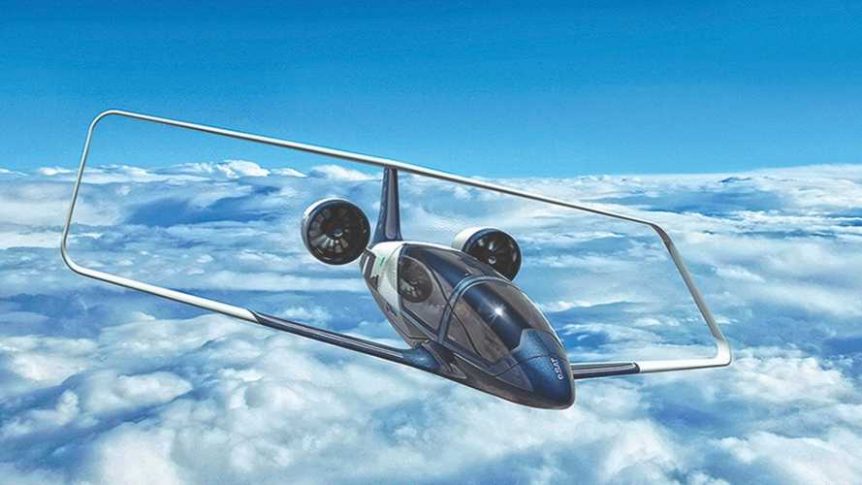 A quandary is a state of perplexity or doubt, and people caught in one often devolve into depression or unhappiness.  Our quandary today comes from the announcement of the Silent Air Taxi, a fixed-wing, hybrid-powered, box-wing aircraft.  The quandary comes from whether it’s better to transport one’s self to a nearby small airport and hop on a low-slung commuter aircraft that requires only a 400-meter (1,312 feet, or about a quarter mile) runway.  Or, to call up an on-demand Urban Air Mobility device, use the urban infrastructure and hie one’s self to an Uber SkyPort or a Volocopter launch pad. 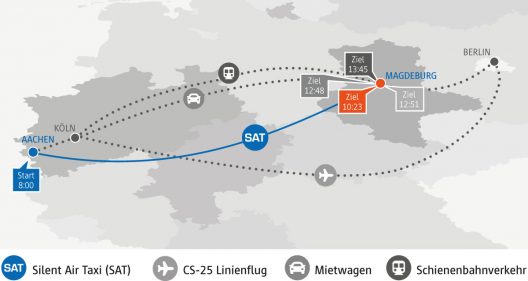 Its designers, mainly from Aachen, Germany’s academia and industry, point out that in Germany about 25-percent of the population lives within 10 kilometers (6.2 miles) of the 378 small and medium-sized airports that meet the Silent Air Taxi’s takeoff requirements.   50-percent of the population lives within a 20-kilometer (12.4 mile) radius of such an airport.  If those seeking a quick trip from near home to a site 300 miles away have the price of a first-class rail ticket, they can arrive at the destination less than two hours later.

Since Germany covers 137,847 square miles (about 85-percent of the size of California), the 378 airports each support an area of about 365 square miles (less than an 19-mile square).  The choice will be different for commuters living in an urban area will be closer to Uber-based eVTOL centers, with an established infrastructure to get them to the local Skyport.  Those in more rural or suburban areas who wish to visit distant locales will probably choose something like the Silent Air Taxi.

Planners and engineers at the RWTH Aachen (Rheinisch-Westfälische Technische Hochschule Aachen) Campus in northern Germany premised the design of their medium-range flyer on these ideas:

Apologies for the video being only available in German, but it gives some idea of the German competition.

Organizationally, the project is being driven by member of the RWTH, the Aachen University of Applied Sciences and companies in the aviation industry such as MTU Aero Engines.  Professor Günther Schuh, who has developed urban electric delivery vehicles such as the StreetScooter, despite having a popular item (an English milk company recently bought 200 for silent deliveries), the DHL-based company has been looking for a customer.

Schuh has an interesting, and seemingly contradictory interview (perhaps his own quandary) in the on-line journal, Clean Energy Wire.

“Which use cases do you have in mind for your “Silent Air Taxi”?

In this image, Silent Air Taxi has fixed wheels under lower wing, simplifying landing gear.  Craft will be built by e.Sat GmbH, which  hopes to build 1,000 examples

“We have important mobility demands for urgent medical supplies, surveillance, fighting crime, and other such missions. Accepting congestion on our two-dimensional traffic routes is much easier if you can use the third dimension in an emergency – whatever that may be.

“So, you’re not advocating using the third dimension for mass transport?

“It’s impossible to create a means of mass transport in the air. Using our air space can only cover about 3 to 5 percent of total mobility requirements, but it can help eliminate 50 percent of bottlenecks. This is why the third dimension is so valuable.” 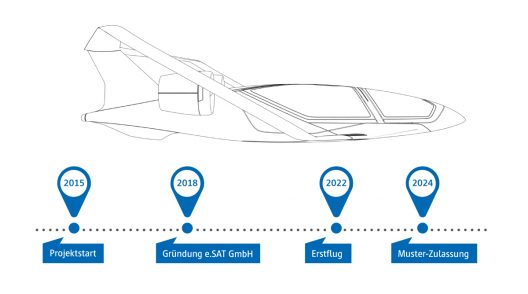 The interview concludes with some thoughts we might all ponder:

“Above all, the use of airspace is a social issue. To be out of reach for supply or rescue, or unprotected against crime – these are no comfort issues. It’s not about having some luxury item delivered to your doorstep two hours after ordering it. That’s possible, but that’s not why I’m doing this. It’s about social services, where the third dimension is indispensable because there are too many traffic situations that don’t offer alternatives.

“But we must use it in a way that doesn’t harm anyone. Today, the use of airspace harms people because it makes a lot of noise. Only a few privileged people are being transported quickly for whatever reason, and the rest only gets a massive dose of noise. But we have found a solution to this problem because our aircraft does not make noise, which means it could be a breakthrough for entering the third dimension in bottleneck situations.”