Single-seat ultralight aircraft are a popular part of personal aviation and a small part of the growing electric Vertical Take Off and Landing (eVTOL) market.  We look at two contenders here, and compare them to a newly-certificated single-seat fixed-wing solar-assisted airplane.

Citing the “Emerging market competition for urban air mobility,” KARI sees their craft as a means to reduce the “enormous social costs resulting from traffic increase on the ground.”

A huge number of Korean organizations joined the effort develop the OPPAV demonstrator. “Korean companies (KAI, Hyundai Motors, Hanwha System, VesselAerospace, KAT, Doota, EDT, and RealtimeWave), research institutes (KIAST and KOTI), and Konkuk University formed a consortium for the program sponsored jointly by the Ministry of Land, Infrastructure, and Transport (MOLIT) and the Ministry of Trade, Industry, and Energy (MOTIE) and led by KARI beginning [in] 2019.”

Last year, KARI flew a 44-percent scale model of their original design for the OPPAV, which seemed to perform smoothly even during transitions from vertical to forward flight and back.

As described on KARI’s video, “On June 2nd, there was a flight test of the 44[-percent] scaled-down vehicle of the Optionally Piloted Personal Air Vehicle, which is being researched and developed by the Air Force. In this test, automatic flight was successfully performed over the entire flight range consisting of take-off-transition-maximum speed-transition-landing.”

Since then, the design is being readied for full-scale tests in mid-year.  The MOTIE project is developing the prototype, which will have VTOL capabilities and top out at 240 kilometers per hour (149 mph) and cruise at 200 km/hr (124 mph).  With a maximum takeoff weight of 650 kilograms (1,433 pounds, the little eVTOL can carry up to a 100 kilogram (220 pound) pilot/passenger for up to 50 kilometers (31 miles), which should make for a short, quick trip.

This may not seem terribly practical, but for short, in-city hops that avoid traffic (especially the grid-locked Korean streets or Asian streets in general, such trips might attract customers willing to pay for privacy and time saved.

Looking a bit like a miniature Volocopter, LIFT Aircraft’s Hexa lifts with 18 small motors coupled to 18 small battery packs.  This level of redundancy provides a high degree of safety, according to LIFT, and the small craft can lose up to six rotors and still maintain flight.  LIFT says that if the redundancy fails, a zero-level ballistic parachute will ensure a soft landing.

Business Insider reports, “Hexa is essentially a recreational vehicle for the air, able to fly in 15-minute intervals at low altitudes. Lift plans to market them to millennials with disposable income and anyone chasing adrenaline, because a pilot’s license isn’t required. The COVID-19 pandemic delayed plans, but Lift still says it will be touring locations across the US where anyone meeting height, weight, and age requirements can pay to fly. As of November 2019, Lift says it had more than 15,000 flights on a waitlist to ride Hexa.”  (Note: Your editor was signed up for a ride, but wonders what the current cost of a flight will be.  In 2019, they were listed at $149 to $249, depending on what “early bird” specials were in play, according to Geekkwire.)

LIFT has five Hexa up for sale at $495,000 each, with the idea that owners could rent them out to the curious or thrillseekers.  An owner would have to sell over 1,900 $249 rides to retrieve the cost of the vehicle.  If each ride takes 15 minutes, only 32 rides could be sold in an eight-hour day.  Even that might be a stretch, since the initial pitch was to include pre-flight training, some cockpit familiarization and safety training.

There would also need to be at least some infrastructure to recharge the 18 batteries, plug them into their motor units, and perform other necessary maintenance and safety checks.  Above all, sending a novice, unlicensed passenger aloft, even with redundancies and safety features, will probably have high insurance rates attached.  It’s a bit like the operations costs for allowing strangers to rent electric scooters and setting them loose on city streets.

It’s a guess that batteries will be the highest cost items in maintaining the Lifts.  Barring accidents, motors and propellers (rotors?) will last a while, but batteries will be subjected to full power operation for the majority of their flight time.  How long will they last?

In a move somewhat above your editor’s pay grade, “The companies (SparkCognition, SkyGrid, and LIFT Aircraft) will apply AI and blockchain technology to manage the airspace for autonomous vehicles, specifically HEXA, LIFT’s electric vertical take-off and landing (eVTOL) aircraft. This partnership comes through a contract milestone with the Air Force Research Laboratory (AFRL) through its SBIR Phase II program and will help enable the United States Air Force (USAF) to safely and efficiently operate unmanned aerial vehicles (UAVs) in first responder scenarios such as search and rescue missions, heavy lift cargo, fire response, and medical evacuation.”

Elektra One – A Fixed Wing Alternative

Calin Cologan, head of Elektra Solar, reports his Elektra One, a single-seat optionally-piloted airplane, has been certified in the German ultralight class as of October, 2021.  This makes it the second European electric plane to gain certification.  Elektra One can also be flown as an unpiloted vehicle, using a triple-redundant autopilot system composed of flight control computer (FCC), navigation sensors, and air data system.  Double redundant actuators ensure control compliance. 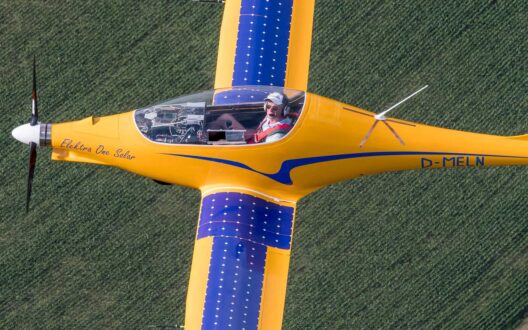 Elektra One has 7.5 square meters of solar cells to increase range

The plane made its debut in 2011, and was shown at Oshkosh that year.

If one does not absolutely need vertical takeoff and landing capabilities, Elektra One can take off in less than 100 meters (328 feet) and land in 300 meters (984 feet).  Its less than 50 dB noise level, equivalent to the sound of moderate rainfall, makes operation in noise protected areas possible.

Elektra One has an Eck-Geiger dual redundant propulsion system, the HPD-32.  Each of two subsystems is composed of motor, motor controller, and battery. A dual redundant power supply ensures operation of avionics and the autopilot. In the case of motor, controller or battery (or all of the above) failure in one subsystem, the aircraft is able to climb on the remaining system with at a rate of at least 1.5 meters per second (295 feet per minute).

7.5 square meters (80.7 square feet) of solar cells serve as a range extender.  Solar energy can be used for the motor directly, for charging batteries or for both in parallel.  This has been proven in long-distance flights across the Alps.

Anything promising eVTOL performance has to have sufficient power to lift the entire weight of the craft and enough excess power to maintain a safe rate of climb.  Elektra One has 32 kilowatts total, and maintains level flight at 90 kilometers per hour (56 mph) on 5 kW (6.7 horsepower).

All these optionally piloted vehicles have their potential uses and capabilities.  It’s exciting to see all of them moving forward.