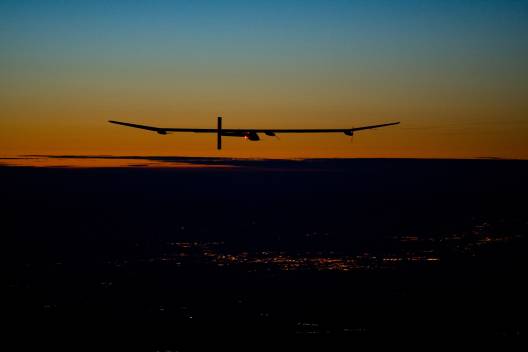 Solar Impulse flies into the night over Payerne, Switzerland

Andre’ Borschberg, CEO and co-founder of the Solar Impulse project, landed this morning at 9:00 a.m. (local tme) in Payerne, Switzerland, having completed the first-ever night flight on battery energy stored during the previous day through the craft’s solar cells.  Taking off at 6:51 a.m. July 7, Borschberg flew the 64-meter span, four-motor airplane in large patterns around the area, gaining altitude to a height of 8,564 meters (27,404 feet) above sea level and charging the batteries – all while running the motors at climb power.

As night fell, he glided to preserve the stored power, ran the motors as needed to maintain altitude, and landed with a small reserve.  This successful demonstration of being able to run the motors on solar power while still charging the batteries means the project can go on to its next stages, spelled out in this morning’s press release

“The success of this first night flight by a solar-powered plane is crucial for the further course of the Solar Impulse project. Now that the HB-SIA’s ability to remain flying at night using solar energy stored during the day has been proved, we can start pushing the human and technological limits further. The next important milestones for Solar Impulse will be the crossing the Atlantic and the around the world flight, using the second prototype which goes into construction this summer.”

Solar Impulse’s flight is the first manned solar-powered overnight flight.  In a preview of what would be, Alan Cocconi flew the solar-powered, unmanned airplane SoLong over 48 hours between June 1 and June 3, 2005.  Subsequent unmanned, solar-powered flights have raised this time considerably, giving credence to the idea of manned, multiple-day missions. The last two days have certainly confirmed the readiness of the Solar Impulse team to continue this progress.