To prepare Solar Impulse and its pilots for the upcoming airshow season, André Borschberg and other members of the flight team completed a series of tests to enable precise flying, particularly around the Paris Air Show at Le Bourget. “We are preparing for these trips beforehand because they are very complex operations, from both a logistical point of view and purely in terms of flying”, Borschberg explained following his three-hour flight on April 18.

Solar Impulse will be the “special guest” at the Paris Air Show at Le Bourget from June 20 through 26. This last week’s tests were designed, according to acting flight test director Ralph Paul, with “two objectives…: to adopt the Bourget configuration and increase the flight envelope by doing stickraps.”

As the project’s blog explains, “The solar airplane made three simulations closely modeled on the choreography to be adopted for the presentation flights in Paris…. Initially, the pilot climbed to an altitude of 1000 feet (a little over 300 meters from ground level), then flew along the airstrip in a horizontal figure of 8; a maneuver that will allow the public to see the solar airplane from every angle.” 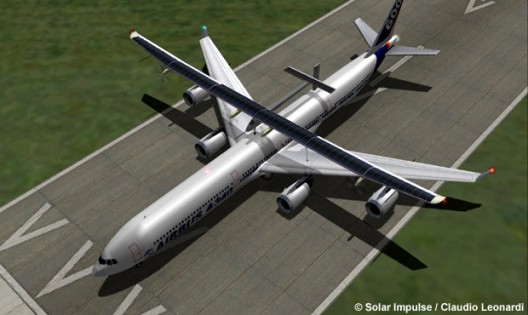 Artist's conception of Solar Impulse with Airbus, among which HB-SIA will fly at the Paris Air Show

“’By itself, this is not a particularly difficult maneuver’”, says the pilot of HB-SIA. ‘But the navigation must be extremely accurate because in Paris there are areas of housing to avoid, Charles de Gaulle Airport and areas with the viewing public. If you consider that the airplane only flies at 50 kilometers per hour (about 31 miles per hour), imagine the effect of [a] 20km/h (12.4 mph) wind: that is 40 percent of the speed of the plane and the consequences are immediately huge. That is one of the many things that must be planned for.’”

“Stickraps”, performed on Monday, April 11 by test pilot Markus Scherdel, are moderately tense exercises in which the pilot gives the “control stick sudden repeated jerks to see if the structure goes into resonance.” Of possible consequences, Scherdel merely said, “I leave it up to your imagination, but suggest you don’t try it with your car.” Following a series of stickraps, he made an emergency descent (for practice, presumably) with airbrakes fully open at 40 knots (46 mph).

Claude Nicollier debriefed the crew following the first day’s test, noting, “the flight today was very close to our objective, i.e. the perfect flight. And it was so because all the members of the team did their work extremely well, so thank you everyone. But don’t forget that the conditions today were perfect, which will not always be the case.”

“’These are manoeuvres which we haven’t done yet with this airplane, and which must be tested’, explains Bertrand Piccard. ‘When a new manoeuvre has been completed and the telemetry confirms that it has been a total success, the “flight envelope”, that is to say the range of possibilities, is enlarged.’”

This will mark the giant (204-foot wingpan) solar-powered airplane’s first flights outside its native Switzerland, and will be a precursor for visits to other European air shows throughout the summer.  With only four 10-horsepower motors, the 3,400 pound may have the least power, lightest wing loading and (outside of lighter-than-air craft), the slowest trip around the Le Bourget pattern.